From 10 October 2020 to the end of January 2021 the Jaguar Daimler Heritage Trust ran a special exhibition on the mezzanine gallery at the British Motor Museum titled  ‘When Jaguar Bought Daimler’, telling the story of when Jaguar bought the Daimler Company from BSA in 1960. 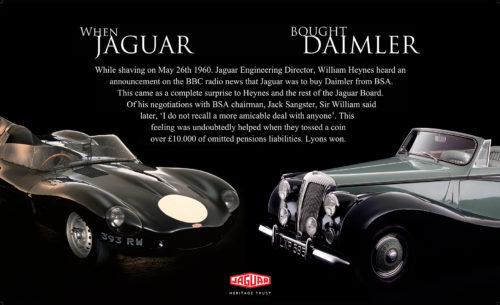 It told the story of Sir William Lyons’ need for additional factory space, which fortuituously concided with BSA’s desire to divest themselves of the loss making Daimler Company.

The deal was struck between Sir William and Jack Sangster of BSA, without the knowledge of Jaguar’s board of directors.  This is exemplified by the opening headline of the exhibition:

“While shaving on May 26th 1960 , Jaguar Engineering Director, William Heynes heard an announcement on the BBC radio news that Jaguar was to buy Daimler from BSA.  This came as a complete surprise to Heynes and the rest of the Jaguar Board.”

The exhibition covered 100 years from the Daimler Company’s beginnings, its history of Royal patronage, superb engineering, efforts supporting both World Wars and then Daimler’s ‘post Jaguar’ life.  A series of period advertisements provided a snapshot of a century of Daimler’s social history. 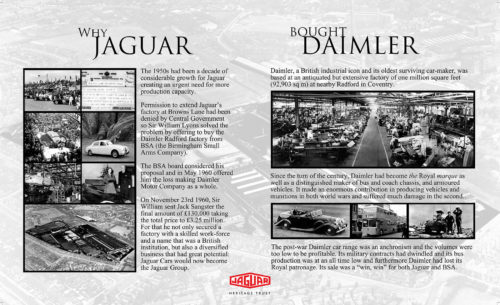 The 1950s had been a decade of considerable growth for Jaguar creating an urgent need for more production capacity.  Permission to extend  Jaguar’s factory at Browns Lane had been denied by Central Government so Sir William Lyons tried to solve the problem by offering to buy the Daimler Radford factory from BSA (Birmingham Small Arms Company).

The BSA Board considered his proposal and in May 1960 offered him the loss making Daimler Motor Company as a whole.

On November 23rd 1960 Sir William sent Jack Sangster the final amount of £130,000 taking the total price to £3.25 million.  For that he not only secured a fully equipped factory with a skilled work-force and a name that was a British Institution, but also a diversified business that had great potential: Jaguar Cars became Jaguar Group.

Daimler, a British industrial icon and its oldest surviving car-maker, was based at an antiquated but extensive factory of one million square feet (92,903 sq m) at nearby Radford in Coventry.  Since the turn of the century, Daimler had become the Royal marque as well as a distinguished maker of bus and coach chassis, and armoured vehicles.  It made an enormous contribution in producing vehicles and munitions in both world wars and suffered much damage in the second.

The post-war Daimler car range was an anachronism and the volumes were too low to be profitable.  Its military contracts had dwindled and its bus production was at an all time low and furthermore Daimler had lost its Royal patronage.  Its sale was a “win, win” for both Jaguar and BSA. 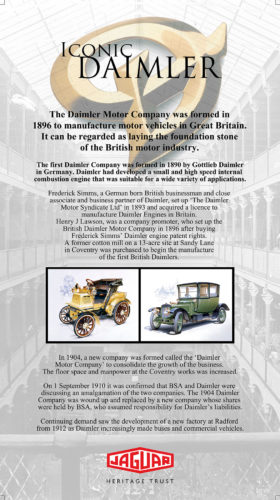 The Daimler Motor Company was formed in 1896 to manufacture motor vehicles in Great Britain.  It can be regarded as laying the foundation stone of the British Motor Industry.

The first Daimler Company was formed in 1890 by Gottlieb Daimler in Germany.  Daimler had developed a small and high speed internal combustion engine that was suitable for a wide variety of applications.

Frederick Simms, a German born British businessman and close associate and business partner of Daimler, setup  ‘The Daimler Motor Syndicate Ltd’ in 1893, and acquired a licence to manufacture Daimler Engines in Britain.

In 1896 Henry J Lawson, a company promoter, bought Frederick Simms’ Daimler engine patent rights.  A former cotton mill on a 13 acre site at Sandy Lane in Coventry was purchased to begin the manufacture of the first British Daimlers.

In 1904 a new company was formed called the ‘Daimler Motor Company’ to consolidate the growth of the business.  The floor space and manpower at the Coventry Daimler Works increased significantly.

On 1 September 1910 it was confirmed that BSA and Daimler were discussing an amalgamation of the two companies.  The 1904 Daimler Company was wound up and replaced by a new one whose shares were held by BSA who assumed responsibility for Daimler’s liabilities.

Continuing demand saw the development of a new factory site at Radford from 1912 as Daimler increasingly made buses and commercial vehicles in addition to its range of cars. 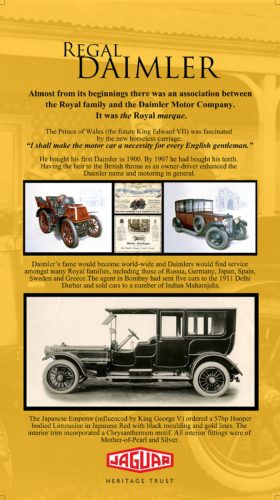 Almost from the beginnings there was an association between the Royal Family and the Daimler Motor Company.  It was the Royal marque.

The Prince of Wales (the future King Edward VII) was fascinated by the new horseless carriage: ‘I shall make the motor car a necessity for every English Gentleman.’

He bought his first Daimler in 1900 and by 1907 had bought his tenth.  Having the heir to the British throne as an owner-driver enhanced the Daimler name and motoring in general.

Daimler’s fame would become world-wide and Daimlers would find service amongst many Royal families, including those of Russia, Germany, Japan, Spain, Sweden, and Greece.  The agent in Bombay (Mumbai) sent five cars to the 1911 Delhi Durbar and sold cars to a number of Indian Maharajahs.

The Japanese Emperor (influenced by King George V) ordered a 57 hp, Hooper bodied, limousine in Japanese red with black moulding and gold lines.  The interior trim incorporated a Chrysanthemum motif.  All interior fittings  were of Mother-of-Pearl and Silver. 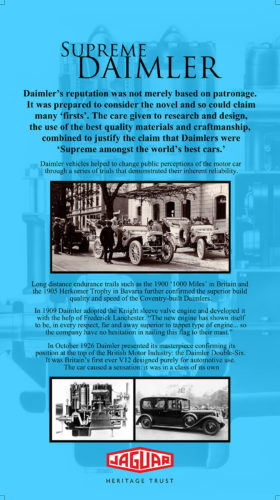 Daimler’s reputation was not merely based on patronage.  It was prepared to consider the novel and so could claim many ‘firsts’.   The care given to research and design, the use of the best quality materials and craftsmanship, combined to justify the claim that Daimlers were ‘Supreme amongst the World’s best cars.’

Daimler vehicles helped to change the public perceptions of the motor car through a series of trials that demonstrated their inherent reliability.  Long distance endurance trial such as the 1900 ‘1,000 Miles’ in Britain and the 1905 Herkomer Trophy in Bavaria further confirmed the superior build quality and speed of the Coventry built Daimlers.

In 1909 Daimler adopted the Knight sleeve valve engine and developed it with the help of Frederick Lanchester.  ‘The new engine has shown itself to be, in every respect, far and away superior to the tappet type of engine…. so the Company has no hesitation in nailing this flag to their mast.’

In October 1926 Daimler presented its masterpiece confirming its position at the top of the British Motor Industry: the Daimler Double-Six.

It was Britain’s first ever V12 designed purely for automotive use.

The car caused a sensation: it was in a class of its own. 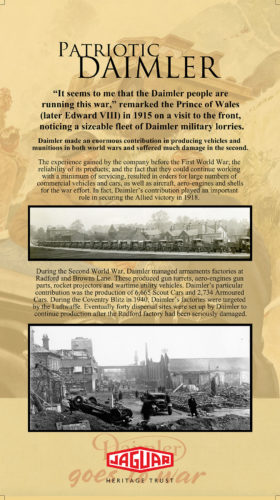 ‘It seems to me that the Daimler people are running this war,’ remarked the Prince of Wales (later King Edward VIII) in 1915 on a visit to the front, noticing a sizeable fleet of Daimler military lorries.

Daimler made an enormous contribution in producing vehicles and munitions in both World Wars and suffered much damage in the second.

The experience gained by the company before the First World War; the reliability of its products; and the fact that they could continue working with a minimum of servicing, resulted in orders for large numbers of commercial vehicles and cars, as well as aircraft, aero-engines and shells for the war effort.

In fact, Daimler’s contribution played an important role in securing the Allied victory in 1918.

During the Coventry Blitz in 1940, Daimler’s factories were targeted by the Luftwaffe.  Eventually forty dispersal sites were setup by Daimler to continue production after the Radford factory had been seriously damaged. 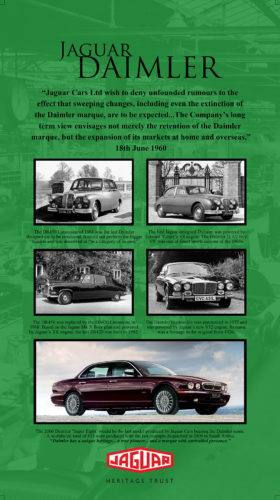 Details of the cars shown on the display panel as follows:

The DR450 Limousine of 1961 was the last Daimler designed car to be introduced.  It could out perform the bigger Jaguars and was described as ‘in a category of its own.’

The first Jaguar designed Daimler was powered by Edward Turner’s V8 engine.  The Daimler 2 1/2   litre V8 was one of the finest sports saloons of the 1960s.

The Daimler Double-Six was announced in 1972 and was powered by Jaguar’s new V12 engine.  Its name was a homage back to the original from 1926.

The 2006 Daimler ‘Super Eight’ would be the last model produced by Jaguar Cars bearing the Daimler name.  A worldwide total of 853 were produced with the last example dispatched in 2009 to Saudi Arabia.

‘Daimler has a unique heritage … a true pioneer… and a marque with unrivalled provence.’

The following Daimlers from the JDHT Collection were included in the exhibition: 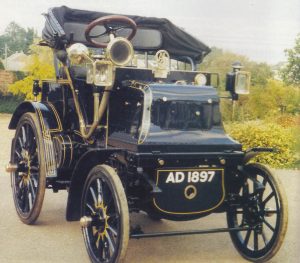