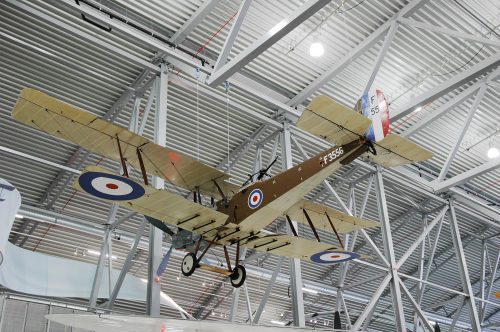 Restored 1918 Daimler-built R.E.8.
Hanging from the ceiling in the Air Space Hall at Duxford

Daimler built several hundred aircraft for use in World War One but only one has survived to the present-day.

The first Daimler-engined motor cars arrived in Britain during the summer of 1895 and on 14 January 1896, the British Daimler Motor Company was registered.  In April 1896 Daimler purchased a refurbished former cotton mill beside the Coventry Canal for the manufacture of vehicles – The Motor Mills.

Daimler quickly established themselves as a major manufacturer of the new horseless carriage and one that was better than most.  The British Royal Family adopted the Daimler as their car of choice – it was not until after World War Two that a Rolls-Royce was added to the Royal Mews – and so too did the British aristocracy.  Daimler was a trusted product with an extensive catalogue of cars, omnibuses and lorries all of which were a by-word for excellence.

When World War One was declared on 4 August 1914, British industry quickly responded to the requests from the armed forces.  The War Office knew the value of Daimler products and commandeered their entire stock of cars and lorries and about 100 vehicles were shipped out to France marked with the letters WD.  Daimler themselves contacted dealers and agents and added a further 200 vehicles for military use.

The war that was expected to be ‘over by Christmas’ showed no signs of doing so and more equipment was urgently required by the forces in France.  Daimler was just one of several companies which received orders for vehicles of all types for the War Office.

The French-designed Gnome rotary aero-engine was already being built under licence in England and was used to power several types of aircraft in service, but UK production was not keeping up with demand, so the War Office approached Daimler to join the programme and build the engine.

Daimler had been in talks with the British Gnome Engine Company and by the end of the first week of the War, on 7 August 1914, they had reached an agreement to manufacture the 80 hp engine.  However, no drawings were available, so an example of the Gnome was despatched from the engine factory at Hendon to Radford in Coventry where the Daimler engineers quickly dismantled it into component form and made their own drawings, from these they were able to produce the Gnome in quantity.

Daimler stated that they would have a complete engine built and running in eight weeks and on 30 September 1914, the first Daimler-built Gnome was bench running.  Vehicles were still being built by Daimler and to cope with the aero-engine production a separate department was established.

The work from Radford was of the highest quality and soon the War Office contracted Daimler to manufacture complete aircraft, commencing with the Royal Aircraft Factory (RAF) B.E.2c.  This was powered by a version of the Renault-designed V12 air-cooled engine, known as the RAF 1 and Daimler were awarded a contract to manufacture this type on 30 August 1914.

At first, aircraft manufactured by Daimler were moved in a dismantled state for test flying elsewhere. However, as production increased it was decided to establish an airfield on the open land in Sandy Lane adjoining the Radford factory.  The site was purchased by Daimler and cleared to make way for a flying field, hangars and workshops.  Joining the Bristol B.E.2 and B.E.12 (powered by a V12 RAF 4a) on the aircraft production line was the R.E.8.  This was also a design from the Royal Aircraft Factory and was a two-seat, twin-gun reconnaissance aircraft powered by an RAF 4a engine.  By the end of World War One, Daimler, Siddeley-Deasey, Standard, Napier, Austin, Coventry Ordnance Works and the Royal Aircraft Factory had delivered some 4,000 R.E.8s to the Royal Flying Corps and the newly-formed Royal Air Force.

Daimler had built and supplied 300 R.E.8s when the Armistice was declared on 11 November 1918 and built other aeroplanes under licence during the war: 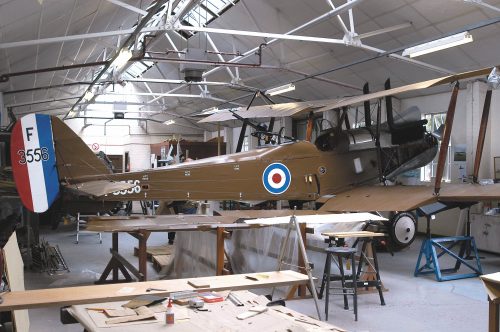 The Imperial War Museum’s surviving R.E.8 (F3556) was built in 1918 and delivered to France, but it was too late and did not reach the frontline.

When the war ended the aircraft was returned to Britain and spent time in various depots until donated to the Imperial War Museum (IWM) in 1920.

For many years it was displayed variously in the IWM Lambeth building, at one time suspended from the ceiling, until it was moved to Duxford airfield in Cambridgeshire in the 1980s and placed on display in one of the hangars alongside other World War One aircraft.  Over eighty years of display in London and Cambridge had taken its toll on the airframe and by the 1990s it looked decidedly tired and in need of a major overhaul.

After surveying the R.E.8 a full restoration programme was ordered and this commenced in the late 1990s. Engineers and volunteers at the IWM dismantled the aeroplane and began work to restore the R.E.8 to its original configuration.  They wanted to complete the work in time for the opening of the new Air Space exhibition hall in 2004. 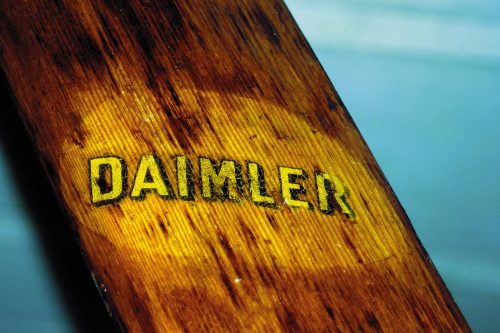 A Daimler transfer applied in 1918 to the wing struts was revealed when the old varnish was removed during restoration.

When the old varnish on the wing struts was carefully removed the Daimler transfers were revealed, confirming this R.E.8 as a Daimler aircraft built at the Radford works. 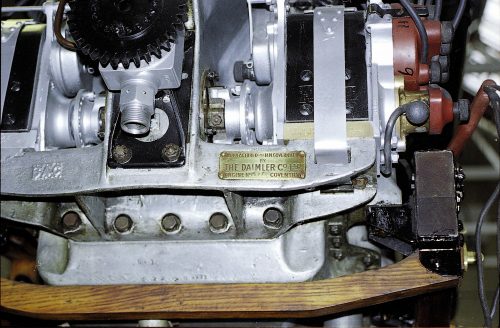 The Daimler-build plate is fixed to the bottom of this RAF 4a engine but cannot be seen when the engine covers are fitted. This photograph was taken during the restoration before the engine was re-fitted.

The Daimler-built engine was dismantled and rebuilt.  A plate on the RAF 4a engine also confirmed it was built by Daimler:

MANUFACTURED FOR H.M GOVERNMENT BY THE DAIMLER CO. LTD. COVENTRY

Many aircraft were paid for by public and private funding in both World Wars and the slogan:  ‘A Paddy Bird from Ceylon’  painted on the side of the engine covers shows that this R.E.8 was a gift from the people of the country that is now Sri Lanka.

The slogan was repainted on the cleaned bare metal finish covers. 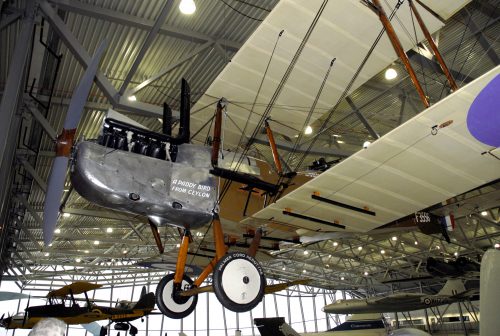 A good view of the R.E.8 may be obtained from the gallery that runs around the Air Space Hall at Duxford.
Note the slogan on the engine cover and the forward-firing Vickers machine gun.

The writer was fortunate enough to be allowed access to the aircraft during its restoration at one of the workshops at Duxford when he was able to take some photographs of the interior, details of the airframe and the engine before assembly and move to the Air Space Hall.

Currently, the R.E.8 is suspended from the ceiling in the Air Space Hall that does not allow the visitor a really close view of the superb work carried out by the IWM technical staff.  However, a gallery runs around the hall and this enables one to have a reasonable view of the R.E.8 and also of the other aircraft displayed in the Hall.

Aircraft in the Air Space Hall include Concorde, Vulcan, Lancaster, Comet, Spitfire and Mosquito.  A recently opened annex in the Hall showcases the Parachute Regiments and is a worthy addition to an excellent Museum complex.  Duxford is well-worth visiting, there is much to see and do at this historic former RAF airfield.