William Lyons was not content for the company to merely build bodies on other people’s chassis.  They needed to create their own chassis to suit their ends.  However, the industry was littered with failures and Lyons knew that a cautious approach was necessary.  Consequently, he arranged for the Standard Motor Company to build a chassis to Swallow’s design but fitted with Standard engines. 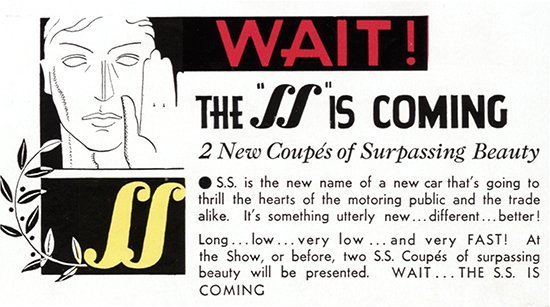 Meanwhile Lyons, the shrewd publicist, had set the scene.  ‘WAIT! THE “SS” IS COMING,’ announced an advertisement in July 1931.  ‘2 New Coupes of Surpassing Beauty.

SS is the new name of a new car that’s going to thrill the hearts of the motoring public and the trade alike.  It’s something utterly new … different … better!’

The SS I and SS II Coupes were duly presented at the 1931 London Motor Show, and sensation they certainly caused.  The body was ultra low and the bonnet outrageously long. 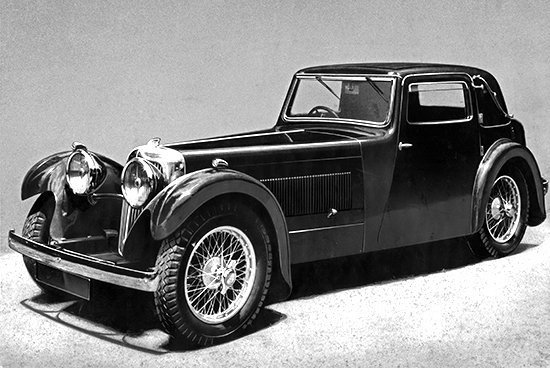 In July 1933 the SS I Tourer joined the Coupe, and apart from being the first open SS model, the significance of the Tourers was that they were the first to be entered in a serious competitive event.

A team of three Tourers was entered in the 1933 Alpine Trial in mainland Europe and the following year they enhanced the SS name very considerably, taking the team prize on this particularly tough event. 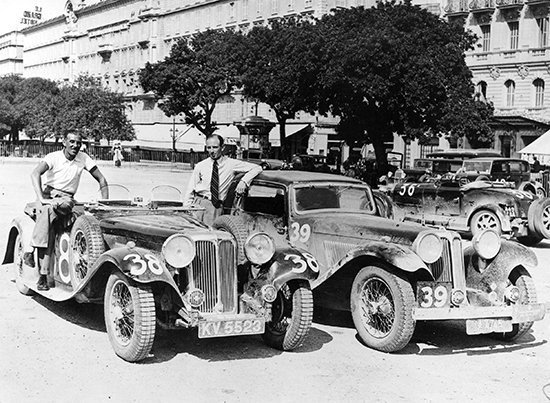 William Walmsley, who did not share his partner’s driving ambition and was losing interest in the venture, severed his connections in late 1934.

Lyons now turned his attention to improving the mechanical integrity of the cars.  First he turned to Harry Weslake, a distinguished engineering consultant specialising in cylinder head design.  Then he formed an Engineering Department and appointed a young William Heynes to be his Chief Engineer.  Heynes was to play a major role with the company for the next 35 years.

The range was supplemented in 1935 with the addition of the fashionable SS I Airline Saloon. 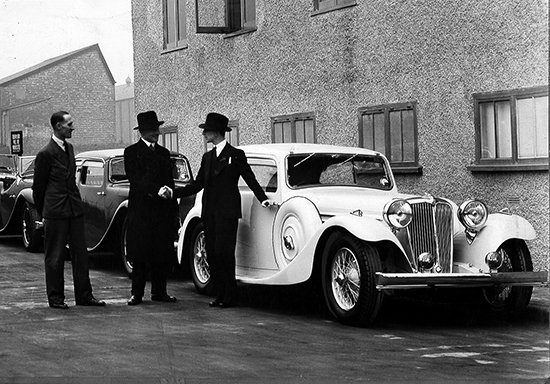 The fruits of Weslake and Heynes’ work were shortly to be seen but, meanwhile, a very stylish sports car was introduced.

Known as the SS 90 and powered by the 2.7 litre side-valve engine, the performance once again did not quite live up to the car’s dramatic appearance. 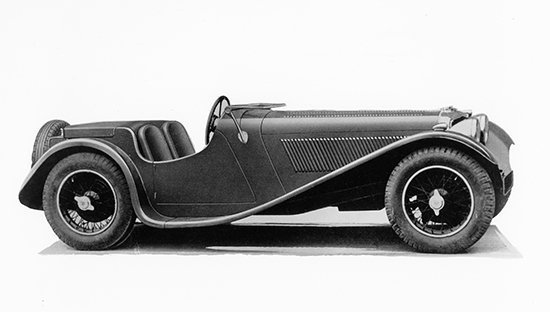 In 1935 the ‘Jaguar’ name sprang upon the scene for the first time with a completely new saloon and sports car range.  Weslake had been turning his talents to the Standard engine and by adopting overhead valves he succeeded in increasing output from 75 hp of the previous 2½ litre side valve engine to no less than 105 hp.  For the new chassis and engine unit, Lyons designed a fresh body style, less flamboyant than previous models, yet still stylish.

Sophistication was increasing, and now customers were offered four doors for the first time on an SS.  Indeed so different were the new models that it was felt that a new model name was needed.

The Company’s advertising agency suggested ‘Jaguar’ and though Lyons took some persuading, it was finally adopted.  Thus the new cars would be known as SS Jaguars.  With typical showmanship, Lyons had arranged a lunch at the Mayfair Hotel in London to launch the new model to the press a few days before the 1935 Motor Show.  The SS Jaguar 2½ litre saloon was unveiled to much favourable comment and the assembled company were asked to guess the price. 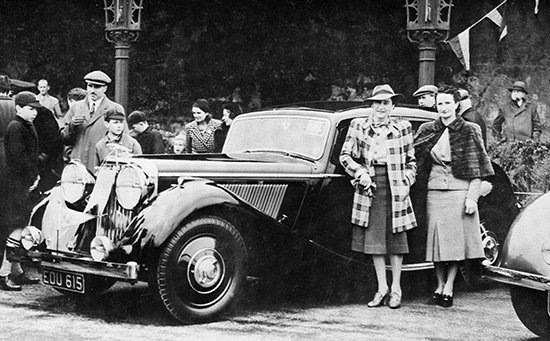 The superb new sports car design, which had been glimpsed just briefly as the SS 90, reappeared in similar form as the SS Jaguar 100.

With a revised treatment around the fuel tank area at the rear, and more importantly, the adoption of the new chassis and engine, the company now produced a sports car to be proud of.

This new model was to be used to considerable effect in competitions, both national and international. 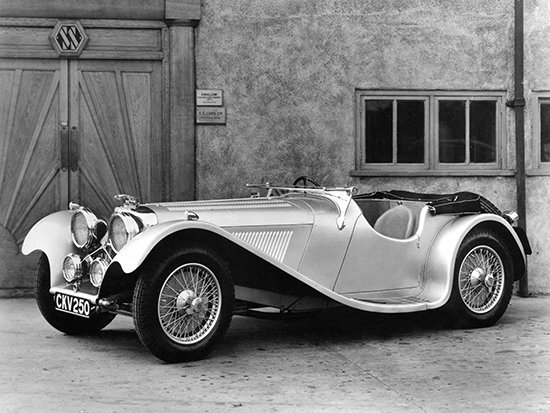 In 1936 the motoring journalist Tom Wisdom, driving with his wife Elsie, won the International Alpine Trials in an SS 100.

A year later a team of three cars was entered by the factory in the RAC Rally, the premier rally event in Britain.  The team took the Manufacturer’s Team Prize but outright success eluded them.  Instead the event was won by a privately entered SS 100!

A new, enlarged 3½ litre engine had been developed.  In September 1937, this engine, together with a new 1½ litre unit, joined the 2½ litre version in a completely revised model range.

The new models were not very different in appearance; distinguished from their predecessors by the lack of the side mounted spare wheel, but the range now employed ‘all steel’ construction. 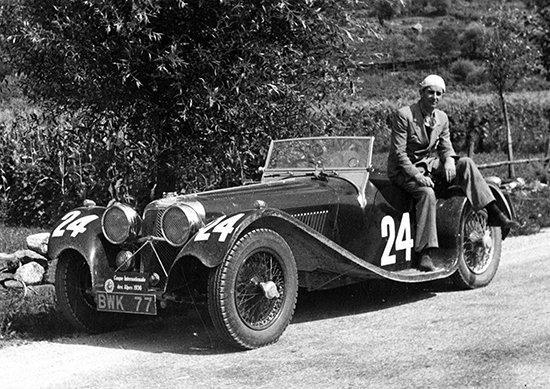 Heynes had designed a further stronger chassis for the new body construction resulting in more interior space and bigger doors.

Prices ranged from £298 for the 1½ litre saloon to £465 for the 3½ litre Drophead Coupe.  The new 3½ litre engine was fitted to the ‘100’ model and this gave genuine sports car performance with sixty miles per hour reached from a standstill in 10.5 seconds and a top speed of over 100 mph. 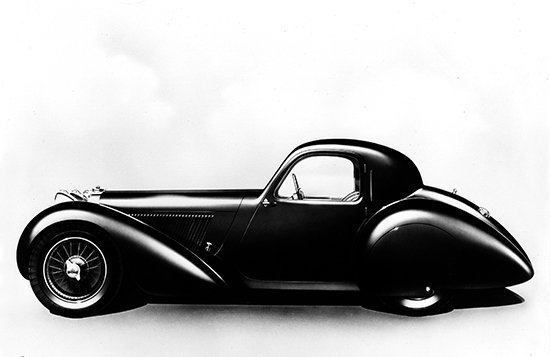 For the Motor Show of that year Lyons had designed a stylish closed coupe body for the SS 100, although this never went into production.