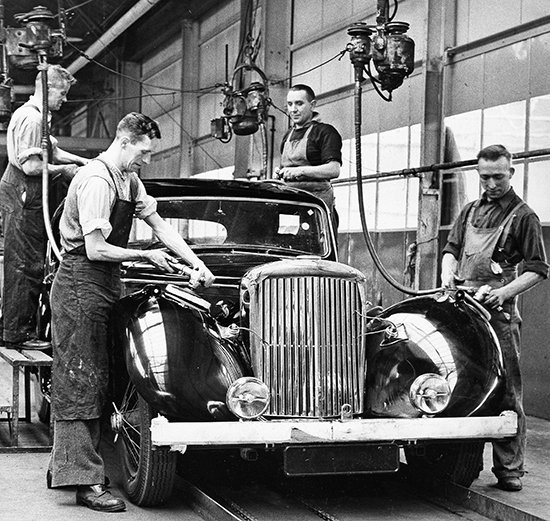 The wartime aircraft and fabrication work had the beneficial side effect of introducing the company to aircraft design and techniques but early post-war times were difficult for British companies.  Amongst other problems were shortages of steel and foreign currency.  The Government issued the dictum, ‘Export or Die’ and steel quotas were closely related to export performance – in other words, no exports, no steel!

Production was ressurrected by reintroducing the pre-war range in largely unchanged form, the pre-war SS 2.5 litre saloon, with some minor changes, became the post-war Mark IV.

At the same time it was decided to drop the SS name and simply call the company Jaguar Cars.  Lyons had registered the company name back in 1937 and now he commented that SS represented ‘a sector of the community not highly regarded.’   The Jaguar name had previously been used on an engine built by Armstrong Siddeley and Lyons checked with Sir Frank Spriggs, MD of Armstrong Siddeley (to whom SS Cars had been sub-contractors during the war) that he had no objection to Lyons’ company using the name and had it confirmed in writing. 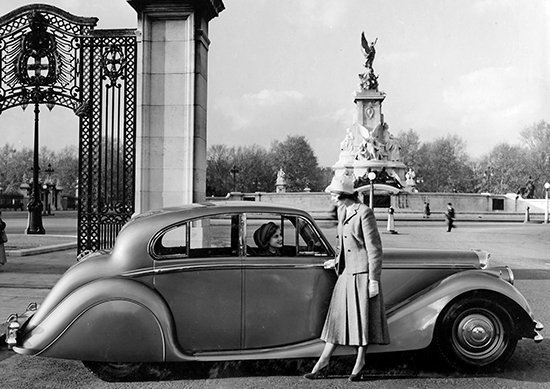 In September 1948 Jaguar announced its first new post-war, stop-gap model, the Mark V, which would carry the company’s fortunes for a couple of years.

The main innovation was the adoption of  independent front suspension, conceived by Chief Engineer, William Heynes.

Before the war Lyons had expressed his ambition to build one of the world’s finest luxury cars.  Lyons wanted this car to have a full size saloon body and be capable of 100 mph.  During the war, he would get together with Heynes, Hassan and Baily during Sunday night fire watching sessions in Coventry to discuss and design a new engine.  This would become the world famous XK engine that would stay in production for over 40 years and be the backbone of Jaguar’s success at Le Mans.

The exciting new engine was virtually ready for production.  The designers bravely chose a twin overhead camshaft layout and after trying several configurations, the final engine was decided upon.  It was to be a straight six of 3,442 cc and given the name XK.  The achieved output was 160 bhp! 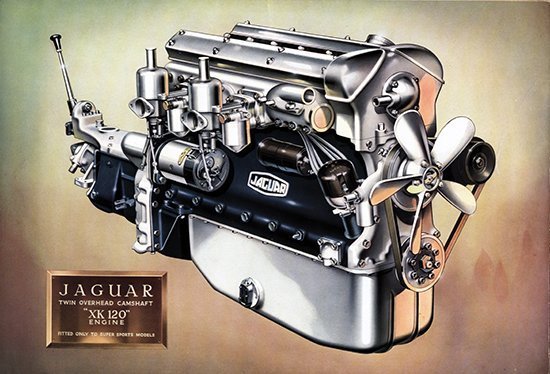 Jaguar now had a tremendously exciting new engine, but work on the monocoque for the new Mark VII saloon was taking much longer than planned.  It became clear that the Mark VII would not be ready in time for the first post-war Motor Show.  The decision was made to showcase the engine in a new sports car, which would generate publicity.

The task fell then to William Lyons to design a suitable body that would fit a shortened Mark V chassis and with the help of Fred Gardner this was designed and built in a matter of months, in time for the 1948 Motor Show. 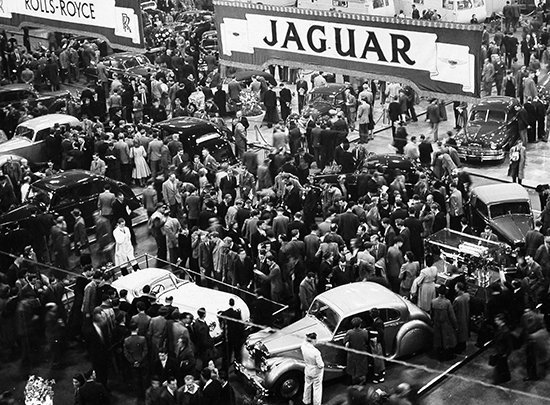 The name was based on top speed which made it the fastest production car in the world.  Indeed at first people were sceptical and refused to believe what was being claimed for the XK120. 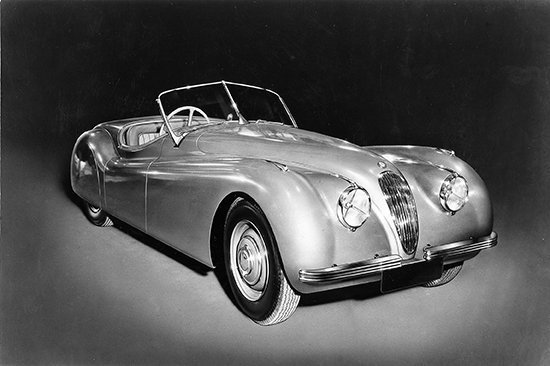 To convince the sceptics however, some tangible proof of the claimed prowess was needed.

Accordingly Jaguar took over a closed section of new dual carriageway at Jabbeke in Belgium where, in front of the assembled press, a standard XK120 proceeded to clock 126 mph.

Then with the windscreen removed, 133 mph was achieved.  The orders came flooding in and Jaguar quickly realised that the couple of hundred originally intended could not possibly meet demand. 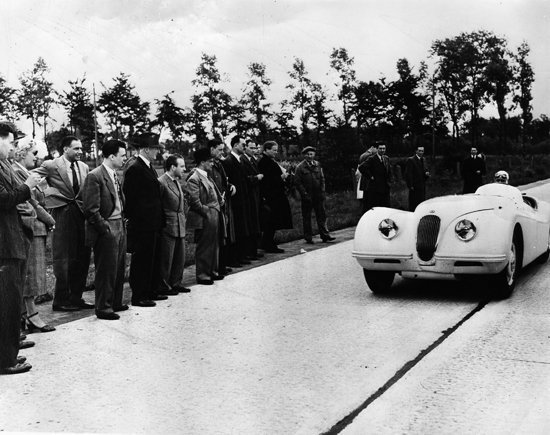 The XK120’s racing debut was at Silverstone in a Production Sports Car race in August 1949.  Three cars were loaned by the factory to well known drivers Peter Walker, Leslie Johnson and Prince Bira of Siam.  Bira was unlucky enough to have a puncture, but Johnson and Walker finished first and second. 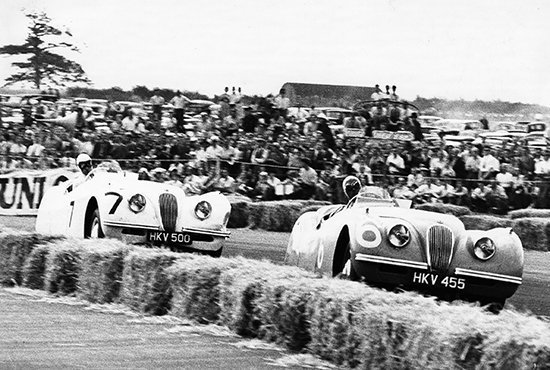 As it had not been originally planned to put the XK120 into volume production, the company hadn’t had either the time or the money available to invest in new press tools to make the body.  The first 240 cars were all hand-built in aluminium, which was in plentiful supply, and once the company knew that there was sufficient demand for the car, it became worthwhile to commission the needed press tools. 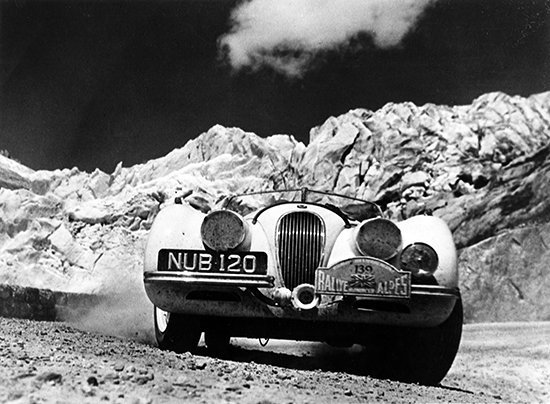 In 1950 it was decided to take three cars to France for the world famous Le Mans 24 hour race, merely to assess their capabilities against international opposition.  Driver Leslie Johnson’s car went out with clutch failure but the other two finished 12th and 16th.  Johnson said that the cars needed more power and less weight if they were to have a chance of winning.

On the rallying front Ian Appleyard and his wife, William Lyon’s daughter Pat, drove their XK120, NUB 120, to success in the Alpine Rallies of ’51 and ’52 and the Tulip Rally in ’51 and became one of the most successful rally cars of all time.