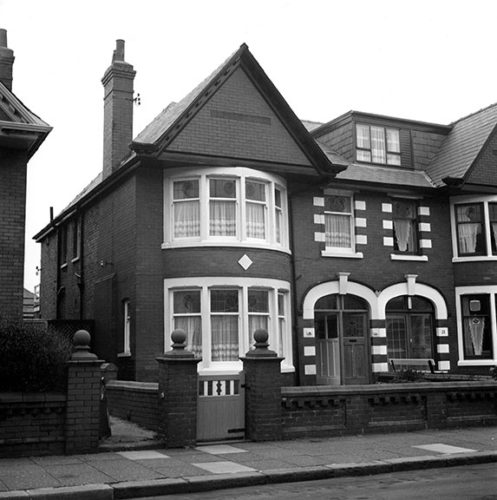 It is quite possible that had Thomas Walmsley not retired and bought a new home for his family at 23 King Edward Avenue in Blackpool, Jaguar Cars would not exist.

Thomas Walmsley was a prosperous coal merchant based in Stockport, who as well as supplying and delivering coal, built and sold horse-drawn coal carts and railway coal waggons.  His son, William Walmsley is often forgotten for his contribution to the Jaguar story; indeed he may, in fact, be called the ‘originator’, as it was Walmsley who designed and built the first Swallow sidecar on which the business was founded.

William was born in Stockport in the summer of 1891.  He was educated locally and on leaving school spent some time in the family business, where he learned about building coal waggons.  William Walmsley was due to follow his father into the business but World War One intervened and Walmsley joined-up.  He served in the Cheshire Yeomanry Regiment and saw action in France where he received an injury to his leg.

On the return of peace, Walmsley moved back to the family home – Fairhaven in Flowery Road, Stockport, with a recently-acquired ex-War Department Triumph motorcycle.  He spent his time rebuilding the Triumph which attracted the attention of some of his motorcycling friends who had him rebuild their bikes too.  Walmsley wanted a sidecar to go with his Triumph but none of those on the market at the time found favour; they were too tall and cumbersome, so he set about designing one of his own. 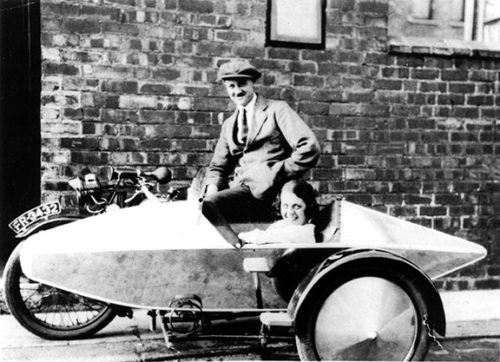 Having worked in his father’s business Walmsley was good with his hands and applied his skills to make an ash frame and fabricate a sidecar body out of aluminium panels, which he cut and fitted himself to an existing Watsonian sidecar chassis.

The stylish design, which had a bullet-shaped streamlined octagonal body, was quite unusual and different from the other sidecars then on offer and vaguely reminiscent of a WWI Zeppelin.

Walmsley initially gave the design the name ‘Ot-as-Ell’ and it was on the road by mid-1920.  Friends of Walmsley admired the design and asked for examples to be built for them.

Whether Walmsley wanted to go into business building sidecars is not clear but he formed an informal partnership with his brother-in-law, Fred Gibson, and with the aid of a couple of local helpers, he set about the task of manufacturing replicas of his sidecar. 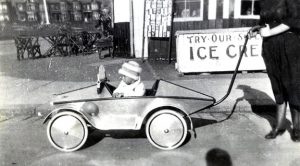 Using the garage attached to his parents’ house, and also a nearby lock-up garage attached to the Bamford Arms Hotel, work commenced on fulfilling the orders; at this stage the sidecars were trimmed by his sister Winifred (Mrs Gibson).  The chassis were (probably) supplied by Haden of Birmingham who also built sidecars.  Walmsley rode his own sidecar combination, illegally, until 28 January 1921, when he registered it and made it road legal.

With so much interest in the sidecar, Walmsley realised that there was potential for further business and, to protect the design, he had it registered on 7 April 1921 through the patent agents F. Rosshardt of Corporation Street, Manchester.  Walmsley also had some postcards printed with a photograph of the sidecar giving details of the product.  It was priced at £28 in its basic form; for an additional £4 the hood, screen, lamp and wheel discs could be added.  The postcards were distributed in the Stockport area as a form of advertising, with the claim that this ‘chair’ was ‘made to sit in, not on.’  However, Walmsley only regarded the ‘chair’ as a hobby and was not really interested in turning building sidecars into a full-time business.

When Thomas Walmsley retired in June 1921, the family (Thomas, his wife, son William and his wife Emily) moved to 23 King Edward Avenue in Blackpool; the house was called Swallowdene.  Here, William Walmsley continued to build the sidecar on an ad-hoc basis in the garage behind the house, with Emily now doing the trimming while he fabricated the panels himself.  He advertised it locally for £28 but most sales were to motorcycling friends.

A young enthusiastic motorcyclist neighbour in King Edward Avenue got into conversation with Walmsley and when he saw the sidecar he immediately ordered an example.  This young man was William (then known as Billy) Lyons and he introduced Walmsley to the Blackpool and Fylde Motor Club. The members were impressed by the Swallow and several more were ordered.

The Walmsley family house in Stockport had been sold to a Mr. G W Swallow and Walmsley started to use the name ‘Swallow’ about this time.  There may have been a link but no evidence has come to light to support this!

With no proper advertising the sidecar was being ordered by people who simply saw an example in the street and Walmsley seemed content to indulge in what he regarded as a hobby and do nothing further to promote the product.

William Lyons was just twenty when he took delivery of his sidecar and was quick to see the potential of the product if it was marketed correctly.  He suggested a business partnership with Walmsley, now approaching thirty, who was reluctant to do so; he had no need to work and did not have the drive that Lyons possessed.

His pregnant wife was keener on the idea and Lyons did not give up and discussed the matter with Walmsley’s father.  Thomas was more receptive and talked his son into the scheme, leaving Lyons to sort out the business plan and find some premises as the garage at King Edward Avenue was clearly not large enough.

They found suitable premises at 5 Bloomfield Road and the partnership agreement was signed on 21 November though it was backdated to 11 September 1922.

William Lyons’ business plan was to increase production from just one a week from the garage to an initial target of ten per week.  Walmsley supervised the manufacturing aspect and the first six employees, while Lyons looked after the advertising and administration.  This worked well and production increased to meet the orders placed locally for the Swallow.  Lyons wanted to introduce the Swallow to a wider market and that meant London.

In 1924 William and Emily Walmsley with their young son Bobby moved out of King Edward Avenue, initially to a flat in Handley Road and later to a house in Bispham Road, taking the house name of Swallowdene with them.

The business prospered and they quickly ran out of space at their first factory in Bloomfield Road, South Shore, renting extra space in Back Woodfield Road and John Street.  By 1926 the business had outgrown the three South Shore locations and Thomas Walmsley bought an empty coach builders factory at 41 Cocker Street, North Shore, which he rented to the partners.

This gave the company the space to start on William Lyons’ next project, building Swallow bodies for Austin Seven chassis.  In short order they also added Swallow bodied Morris Cowley chassis to their product line.

Early in 1928 after receiving an order for 50 cars from P. J. Evans in Birmingham, Lyons secured an order for 500 Austin Swallows from Henlys in London.  It quickly became clear that they would run out of space at Cocker Street and the order included a new four seater Swallow which they also needed to produce.

Lyons wanted to move to the Midlands and initially Walmsley was not too keen but, to his credit, he could see that a move was necessary and made several journeys to Coventry and nearby areas looking for suitable premises.  At one stage he thought Wolverhampton would be suitable but when the possibility of buildings in the Foleshill area of Coventry came up he was in agreement with his business partner.

Both Lyons and Walmsley moved down to Coventry initially staying in the Queen’s Hotel before moving to more sensibly priced lodgings in St Pauls Road, Foleshill.  In relatively short time, both partners found suitable houses in the Earlsdon district of Coventry with Walmsley again calling his house Swallowdene.

On 28 November 1934 the first Annual General Meeting of S.S. Cars Ltd was held and at the meeting William Walmsley gave notice of his resignation, as he did not want to see the Company go public on 11 January 1935.  Lyons bought out Walmsley’s shares and assumed sole responsibility of S. S. Cars Ltd.  Walmsley left after fifteen years with a handsome cheque; he used some of the money to buy shares in Clifford Dawtrey’s Airlite Trailers Company and also purchased a new Bentley.

In 1960 Walmsley left his home in Coventry for a new house at Poulton-le-Fylde near Blackpool.  He was already in poor health but this continued to deteriorate and on 4 July 1960 William Walmsley died just short of his sixty-ninth birthday.

Edward Huckvale and Arthur Whittaker represented Jaguar Cars at the funeral, Lyons did not attend but a wreath was sent on behalf of the Company.  It was an interesting and fruitful business partnership without which Jaguar Cars may never have come about. 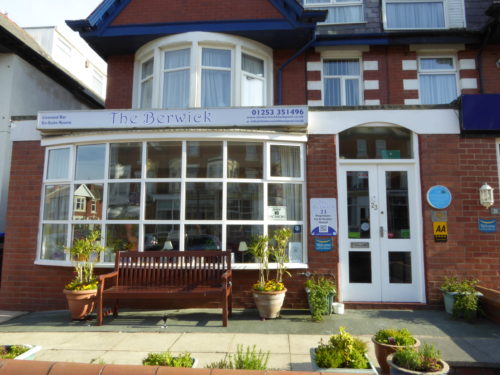 Like many others private houses in that part of Blackpool, 23 King Edward Avenue became a Bed & Breakfast, under the name The Berwick. 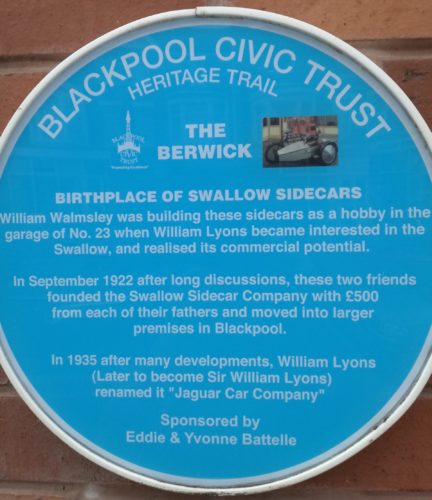 Blue Plaque at The Berwick

The front view of the house has changed considerably as a sun lounge and entrance porch have been added to the building.  The garage at the rear has long since been demolished and the space is used by the B&B.

In 2005 the owners of The Berwick, Eddie and Yvonne Battelle, together with the Blackpool Civic Trust arranged for a Blue Plaque to be mounted on the premises.  This was unveiled jointly by the Mayor of Blackpool and Sir William’s grandson, Michael Quinn.

In 2021 while the Jaguar Daimler Heritage Trust were planning the Swallow Centenary celebrations for 2022, two members of staff stayed at The Berwick.