This Daimler is the oldest surviving Coventry built Daimler car, and it is also one of the earliest surviving British built cars.  It has only had four owners from new.

The car is maintained in full running order, and used to regularly compete in the annual London to Brighton Run, held on the first Sunday in November.  The run commemorates the act which came into force in November 1896, and which made it possible to use motor cars on British roads by abolishing the need for an attendant to walk in front of the car – with or without a red flag! – and increased the speed limit from 4 to 12 mph (6 to 19 km/h).

However starting it is no mean feat.  This predates the concept of spark tubes and has a form of hot tube ignition.  We have to light a small fire in the engine compartment, which heats a tube, which runs into the cylinder and provides the heat to burn the petrol / air mixture. This all takes some time but then the owners of Daimlers back in 1897 would have had a ‘man’ to do this for them and would give them sufficient notice while eating their full English breakfast.

The Daimler Company was formed on 14 January 1896 and a factory was opened at the Motor Mills in Coventry.  The company held the British licence rights to the German Daimler patents, and was therefore allowed to use the name as well.  Early cars were imported from Germany or France, but production of British-built Daimlers was underway by 1897. 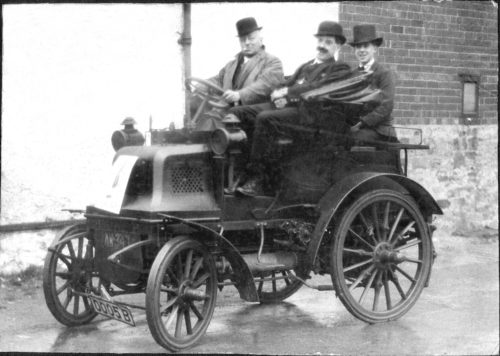 Originally bought by a Doctor Vickers in Shropshire who used the car on his rounds as a doctor in Wellington, Shropshire.  Vickers also used the car to tour France and Belgium and sold it on to his friend Joe Atkinson in 1906.  Atkinson used the car on a regular basis and kept it in full working order until his death in 1953.

The car was then bought by Commander Edward (Ted) Woolley.  He stripped the Daimler down and restored it from the ground up to original condition, though he chose a cream colour scheme which was not authentic. He also had it registered under the appropriate mark AD 1897.  Woolley used the car on a regular basis, and took part in events on the Continent.  His exploits with the car were legendary, and included a crossing of the Col du Cenis 7,000 ft up in the Alps, on a tour from Britain to Munich and Turin. He also  regularly took part in the annual London to Brighton Veteran Car Club Rally.  When Woolley died in 1984 the Grafton was purchased by the Jaguar Daimler Heritage Trust and it was restored to celebrate the Centenary of the Daimler Company in 1996.  The original blue paintwork was uncovered during restoration and the car was returned to the scheme it now wears.

This Daimler is powered by a two cylinder four horsepower engine, and ignition is by a hot tube system. The top speed is 24 mph (40 km/h), and it cost £375 when new.  It has wooden ‘artillery’ wheels with solid rubber tyres and was initially fitted with tiller steering.  It  went back to the Daimler factory in 1899 to be converted to wheel steering (the patch on the bonnet covers the hole for the original column).  According to the specification the hood is made of elephant hide, although this is a grade of leather not from the hide of an elephant!