After having been in the coachbuilding business for four years with a range of special bodies on other manufacturers’ chassis, by 1931 William Lyons and the Swallow Company felt ready to launch their own brand of car.  A ‘teaser’ campaign of advertising under the by-line, ‘Wait! – The SS is coming’ ran in the motoring magazines in the period up to the 1931 Motor Show.  The new cars were finally unveiled on 9 October 1931

Although still making use of chassis, engines and components supplied by the Standard Company, Lyons’ new cars were very different from the earlier Standard Swallows.  There were two models, the six-cylinder SS1 with 16hp or 20hp engines, and the SS2 with a four-cylinder 9hp engine of 1,006cc.  The SS1 had a specially designed chassis, while the smaller car used a Standard Little Nine chassis. 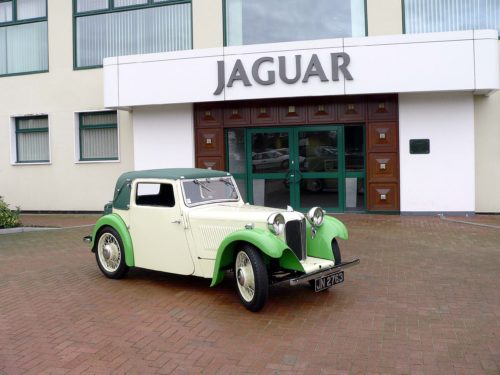 Both models had similar styling, with coupé bodies, dummy hood irons on blind rear quarters, and helmet type wings, but the larger car looked more impressive with its immensely long bonnet.  A range of striking colour schemes was available for both models. Priced at £310, the SS1 was labelled as ‘the car with the £1,000 look’.  The SS2 was even more reasonably priced, at £210, but naturally had a rather modest performance, with a top speed of 60 mph (96 km/h) against the 75 mph (120 km/h) of its bigger brother.

The SS2 was manufactured for two years in this form, and total production during this period was 550 cars.  Survivors of this early type are now very rare.  At the end of 1933, the car was updated with a new chassis with a longer wheelbase, new body styling with flowing wings, and a choice of bigger engines, still Standard side valve units, of either 10hp or 12hp.  This revised model was also available in saloon and tourer form.  It continued in production until 1935, and a total of 1,800 SS2 cars of all types were made.