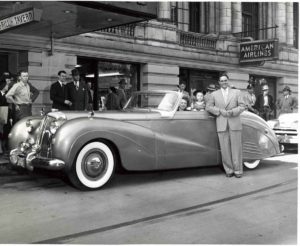 This particular car is one of three left hand drive cars exported to the USA, and was delivered to Daimler’s agent in New York, Fergus Motors, in June 1950.  The original owner was James Melton, “America’s Favorite Tenor” an opera singer and renowned antique car collector.  He displayed 55 of his collection of almost 100 cars, at The Melton Auto Museum opened in Norwalk, Connecticut.  The collection moved from Norwalk in 1953 to his new Autorama Museum in Hypoluxo, Florida.

“In the winter of 1951, Henry Ford II admired the James Melton Green Goddess when it was parked on Worth Avenue in Palm Beach, chatted with my father, and ended up taking a cruise on our yacht.  He and my father made a handshake deal for a television variety show to be sponsored by the Ford Motor Company and hosted by James Melton.  The show (Ford Festival) debuted in April 1951 and went off the air in July 1952.  So that car was instrumental in launching my father’s TV career.” 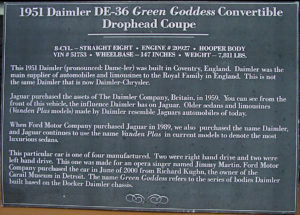 After James Melton’s death in 1961 his collection was sold off and the Green Goddess found its way into the private Kughn collection in Detroit.

It remained there until 2000 when it was acquired by the Ford Motor Company for display in their World Headquarters (at that time Ford owned the Jaguar Car company- owners of the Daimler brand).

The DE36 was the largest model in Daimler’s post-war range and was the last Daimler to be fitted with a straight-eight engine, of 5,460 cc.

Launched in 1945 the car was intended for limousine coachwork, and was supplied by Daimler in chassis form, with bodies available from several coachbuilders, including Hooper.

Examples of the DE36 were supplied for the use of HM King George VI, both as state cars, and for the Royal tours abroad.  By the time production ceased in 1953, 215 chassis of this type had been built.

Apart from the formal types of bodywork, a few DE36s were also made with bodies intended for the owner driver.  In the first post-war motor show at Earls Court in London in 1948, Hooper showed a remarkable five-seater drophead coupe with streamlined bodywork.  The coachwork  was painted jade green with green-piped, beige leather interior – the car became known as the ‘Green Goddess’ and was later used by Sir Bernard Docker, the chairman of the BSA Group to which Daimler belonged.  His wife Lady Norah inspired the extravagantly finished ‘Docker Daimlers’, two of which were also built on the DE36 chassis: the The Gold Car and Blue Clover.

A price of £7,000 including Purchase Tax was quoted for the ‘Green Goddess’, although the car was described as an export model. Over the next two years, a further six cars of this type were built, including the three left- hand drive ones which were exported to the USA. 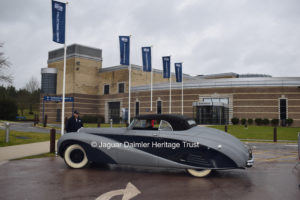 This car was transferred to the Jaguar Daimler Heritage Trust and arrived back home in Coventry in February 2002.  After some repair and restoration work it was moved to the British Motor Museum at Gaydon in February 2017 and put on display in the Collections Centre.

Four or five other survivors of this model are known, most of which are in the USA.