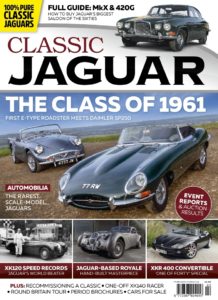 At the launch of the E-type at the Geneva Motor Show in March 1961, two cars served as press demonstrators.  One of them was this car, 77 RW, built in February 1961 as the first production open two-seater.

It was famously driven out to Geneva in a dramatic 17 hour overnight run by Norman Dewis, then Jaguar’s Test and Development Engineer.  77 RW was later used by The Motor for their road test, published 22 March 1961 and it is now the oldest surviving open E-type.

77 RW was featured in the February / March 2020 edition of Classic Jaguar magazine.

In March 2021 as part of the preparations for our ‘E-type Evolution Exhibition’ at the British Motor Museum, we filmed Paul Walton, Editor of Jaguar World taking 77 RW out for a drive to relive the last time he drove the car – 20 years ago.

The E-type was in many ways developed from Jaguar’s successful racing D-type which had won the Le Mans race three times from 1955 to 1957.  Originally intended as a racing car, the E-type eventually emerged as a road-going sports and grand touring car, although many E-types also distinguished themselves in motor racing.  The style of the E-type was clearly based on the D-type, the work of the aerodynamicist Malcolm Sayer.

Originally the E-type was available either as an open two-seater, or as a fastback fixed head coupé.  Both cars shared the same basic structure, a monocoque with a front subframe, and were powered by a 3.8 litre version of the proven Jaguar XK engine, developing 265 bhp.  In 1964 the 3.8 litre engine was replaced by a 4.2 litre version, with uprated brakes, better seating and a Jaguar designed and built gearbox replaced the aged Moss box.  Then in 1966 a third option was launched – a 2+2 on a slightly longer wheelbase providing rear seats for two children.

The E-type’s looks were sensational, and it quickly became a symbol of the 1960s.  Thanks to its unbeatable combination of price and performance, offering a top speed of close to 150 mph (241 km/h) at little more than £2,000, it became an instant success, particularly in the vital American market.

In 2000, Mr Michael Kilgannon, the long-term owner of this historic car, kindly put 77 RW on permanent loan to the Jaguar Daimler Heritage Trust.  The car was then completely restored with the generous assistance of Martin Robey Limited of Nuneaton.

77 RW was featured in the Summer 2018 edition of Jaguar World magazine.