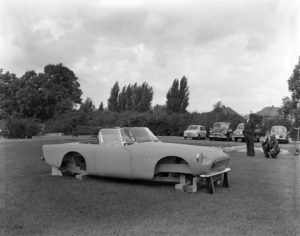 Sir William designed this as a replacement (or Mark II) version of the SP250.  Chassis 100003 was fitted with rack and pinion steering and torsion bar suspension (the same as the E-type).  Sir William styled the body and Fred Gardner built a wood and fibreglass mock-up at Browns Lane.  A full fibreglass body was then made and fitted to chassis 100004 based on standard SP250 running gear.  This body was then fitted to chassis 100005 which was a standard ‘B’ spec chassis and was then designated SP252

The SP250’s fibreglass body was labour intensive and took 2½ times as many man-days to build as the Jaguar E-type.  Although the SP252 was generally regarded as an improvement over the SP250 it was decided that it would not be economic to put into production and the project was shelved.

In 1967 a regular Jaguar customer, Peter Ashworth – saw SP252 in storage and managed to convince the then Jaguar MD, Lofty England, to sell him the car and it was registered LHP 307F in September 1967.  The car was sold on again in 1968 with fewer than 700 miles on the odometer and bought by Tom Sweet who kept it until 1994, using it very little and it deteriorated while in storage.

In 1994 Brian Peacock bought it and started a long term restoration, completing repairs to the chassis, the bodywork and overhauling the brakes and suspension.  He had the car re-painted, fitted a new windscreen and re-trimmed the interior and the hood.  When the car left the factory it did not have a proper grille fitted so he had one made as closely as possible to the images of the original.  This did not include the traditional Daimler ‘flutes’ so he had a section handcrafted to finish off the grille.

The SP252 changed hands a couple more times before coming into the ownership of Matt and Claire Pilkington in early 2020.  They have kindly loaned SP252 to the JDHT from March 2019 to the end of December 2021.