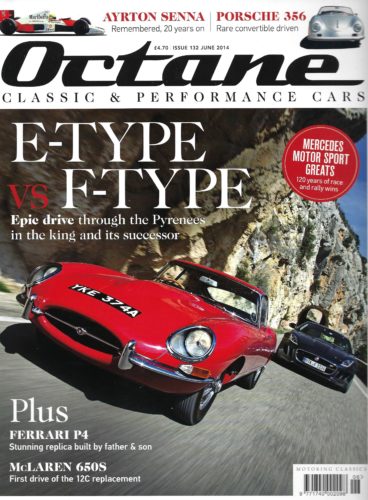 The June 2014 edition of Octane Magazine #132 used YKE 374A for a comparison report with the newly launched F-Type, driving in the Pyrenees.

The article was reprinted in the Octane Special Issue in December 2020 on ’60 Years of the Jaguar E-Type’.

This car was built on 8 October 1963 and was originally finished in Opalescent Silver Blue with Dark Blue interior trim.  It was sold in London, with an original registration mark of GS 55 but was later re-registered under 410 PE before finally being allocated the age-related mark YKE 374A.  Although the mileage of 61,000 is believed genuine, it was completely restored in previous ownership and was then re-finished in Red with Biscuit trim.  It was bought by Jaguar Daimler Heritage Trust in January 2003.

The E-type created a sensation when it was launched at the Geneva Motor Show in March 1961.  Here was a beautiful sports car with the promise of a top speed of 150 mph, available for little more than £2,000 in the home market.  The open car was the work of aerodynamicist Malcolm Sayer and was derived from his D-type racing car.  However, Sir William Lyons insisted that there should also be a fixed-head coupé version of the car.  This design was created by Bob Blake, and became Sir William’s favourite E-type.

In mechanical terms, the E-type continued to use the three-carburettor 3.8 litre XK engine with a 9:1 compression ratio and 265 bhp (gross) which had been introduced in the XK150 3.8S model.  Similarly, the four wheel disc brake system was by now an established Jaguar feature.  New was Bob Knight’s independent coil spring rear suspension, and while the body was basically of monocoque construction, it had a front subframe for the engine.

Jason Plato and Jonny Smith of Fifth Gear recreate the journey Norman Dewis took in 1961, driving there in YKE 374A. 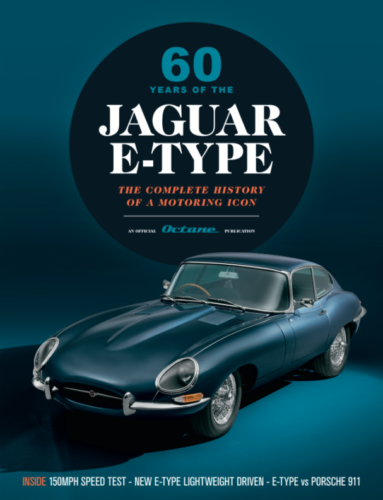 While the top speed of the original press car 9600 HP on test with The Autocar in 1961 had been measured as 150 mph, few standard production cars would reach the magic figure – but they came close!