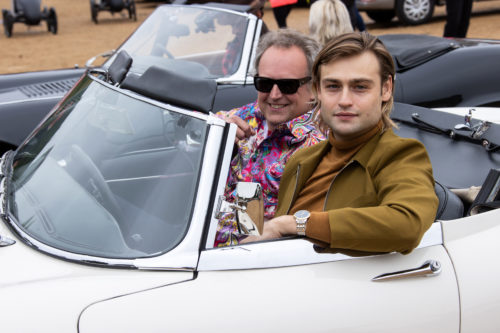 This 1969 Series 2 E-type had a very special day out on Sunday 5 June 2022 – taking part in the Queen’s Platinum Jubilee Pageant processing up The Mall to Buckingham Palace – in front of a UK TV audience of over 13 million people.  JDHT Managing Director, Matthew Davis, suitably attired in paisley shirt chauffeured English actor and musician Douglas Booth to the enjoyment  of the crowds.

This  cream coloured E-type was the 406th of 776 open two-seaters with right-hand drive built between August 1968 and August 1970.  (There were ten times as many with left-hand drive).  It was built in October 1969 and registered in Northampton in April 1970, but the first owner is not known.  From 1974 it was in the ownership of the same enthusiast, who in 2001 generously donated the car to the Jaguar Daimler Heritage Trust.

Introduced in 1961 in 3.8 litre form, the E-type received the bigger 4.2 litre engine together with a fully-synchronised gearbox in 1964.  In the following year, the original open two-seater and fixed head coupé models were supplemented by the longer wheelbase 2+2 coupé, on which, for the first time, an automatic gearbox became available.  In late 1967, all E-types were modified to comply with the first US safety and emissions regulations which came into force on 1 January 1968, and the resulting interim model has become unofficially known as the ‘Series 1½’.  From then on, the E-type lost its headlamp fairings.

Bigger changes were in store for the 1969 models, again due to the influence of US legislation.  At the front, much larger side lamps and indicators were re-positioned below the bumper, and flanked a larger air intake.  The rear bumper was raised, and new larger tail lamp clusters were fitted below it. Between them was a new number plate plinth with two reversing lamps.

There were several mechanical changes.  More powerful Girling brakes were now fitted, and a cross-flow radiator with two fans and a separate expansion tank was introduced.  Power steering became available as an optional extra.  Altogether, the changes were sufficient for the revised model to be officially called the Series 2, and be given the new chassis number prefix of 1R instead of 1E, with new series of numbers.