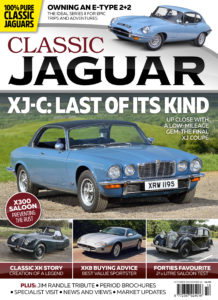 This Squadron Blue car was officially designated as the last of line of the coupé range, and was retained by the company for the Jaguar Daimler Heritage Trust.

XRW 119S was featured in the October/November 2019 Edition of Classic Jaguar magazine.

The idea of making a two-door pillarless version of the XJ saloon had surfaced very early in the car’s development as Jaguar became aware of the growing American market for hardtop cars in the 1960s. Indeed, early XJ6 styling models were all two-door cars.  However it took a long time for the idea to reach fruition, and two-door XJs were only revealed at the 1973 Motor Show, as part of the revised Series 2 range.  Then there were further development problems with the rear quarterlight sealing which effectively delayed series production until 1975.

Built on the short wheelbase floorpan from the original Series 1 saloon, the distinguishing feature of the two-door coupé was the pillarless window style with no doorframe or B-post.  The doors were four inches longer than the standard saloon front doors.  Further changes included folding front seats to allow access to the rear.  All production coupés featured a black vinyl roof covering, and the XJC badging on the boot lid.

Mechanically, the coupés were similar to their saloon sisters, offering a choice of either the 4.2 litre XK 183bhp engine, or the 5.3 litre V12 253bhp engine.  There were also Daimler versions of both cars, under the Sovereign and Double Six names.  From 1975, with the adoption of fuel injection on the V12, power output was raised to 285bhp, with fuel economy and top speed both improved.  In 1976-77, the V12 coupé was the basis for the short-lived Leyland Broadspeed effort in European Touring Car racing.

The small numbers of cars built made it difficult to justify coupé production which therefore ceased on 8 November 1977, with 10,426 two-door cars of the four models having been built.  At that time the Jaguar XJ 5.3C cost £11,755, with an extra £321 for the Kent light alloy wheels.