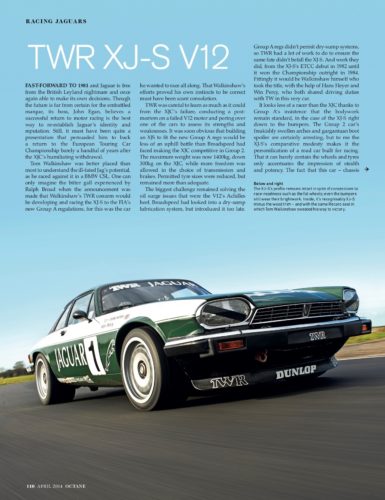 Our 1984 TWR XJ-S was featured in the April 2014 Edition of Octane magazine in their feature on Jaguar Racers.

Encouraged by the success of Group 44 racing in America, Jaguar contemplated a return to racing in the early 1980s, but did so cautiously remembering the problems experienced with the Leyland-sponsored Broadspeed racing XJ-C of 1976-77.  Setting up a new works competition department was out of the question.  Motor racing had moved on since the 1950s, required specialist knowledge, and a major engineering effort would have been unrealistic.  John Egan, Jaguar’s new Managing Director, saw an opportunity to enhance the standing of the marque in the eyes of the world, perhaps already with an eye to the privatisation which happened in 1984.

Tom Walkinshaw had a fine track record with Rover, Ford, Mazda, and BMW, and approached Jaguar with a proposal to enter the European Touring Car (ETCC) Championship of 1982.  The regulations prompted him to search for a car with the widest possible tyres and independent suspension.  Although the XJ-S was heavy, it fitted the bill.  Its fuel injection was an advantage, due to restrictions on altering the engine intake manifold.  It won its first race before the end of the season, and came second in the championship.

The 1983 season was even better, as the Tom Walkinshaw Racing (TWR) Jaguar at one time led BMW with five wins to four, and only narrowly missed winning the championship.  A three-car team ran in the 1984 season, and this time, the Jaguars were unassailable.  Of seven race victories, the most memorable was in the 24-hour race at Spa-Francorchamps in Belgium, by Walkinshaw and Win Percy – the first victory in a 24-hour race for Jaguar since the 1957 Le Mans. Walkinshaw won the championship, the first Jaguar driver to do so since Peter Nocker in 1963.

While TWR was then encouraged to develop a Le Mans winning Jaguar, the racing career of the XJ-S came to an end, with only a few more appearances in races in Australia and New Zealand in 1985 and 1987.  However, this was the car that put Jaguar back on track, in more ways than one!