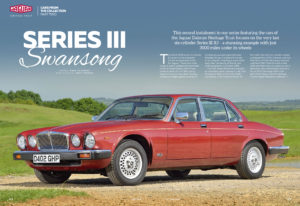 This Bordeaux Red Series 3 XJ6 was built in April 1987 and was the final six-cylinder Series 3 model.  This was also the last Jaguar saloon car to use the famous XK engine, first launched almost forty years before.

D402 GHP was featured in the December 2019 edition of Classic Jaguar magazine.

By 1979, after ten successful years in the market, the time had come for a new generation of the Jaguar XJ model range.  Although an all-new saloon car model was under development behind the scenes under the project number XJ40, this was still a number of years away from production.  To fill the gap, Jaguar for the first time went to an outside design house, the Italian firm of Pininfarina, and asked for an update of the classic XJ shape.

Pininfarina largely kept the lower part of the body although there was a handsome new grille, while bumpers and rear lights were tidied up.  Changes above the waist were more radical, with a new roof and glasshouse, incorporating deeper side windows made from curved glass.  The new model, launched in March 1979 as the Series 3, won instant acclaim as a great improvement over the Series 2 model.

The model mix was initially as before, with six and twelve-cylinder versions offered under both the Jaguar and Daimler names.  Vanden Plas models were at first unique to Daimler but in 1981, a Jaguar Vanden Plas model was introduced for the North American market.  In 1983 the name Sovereign was transferred from Daimler to Jaguar, and from then on was used for the most luxurious versions of Jaguars.  The final list price for the 4.2 Sovereign in 1986-87 was £20,795.

In October 1986 the new generation of XJ models appeared, the XJ40 range.  Production of the Series 3 was now progressively run down.  By 1987, Series 3 production had reached almost 168,000 cars.  The twelve-cylinder models continued in production until 1992, and the total production of all Series 3 cars reached 177,244 cars.

D402 GHP was one of the cars featured in the video montage – Jaguar XJ50 – which Jaguar Cars produced
to celebrate 50 years of the XJ in 2018, showing the evolution of the XJ Saloon.