This car was built towards the end of Cabriolet production, and was originally the personal car of Diana, Princess of Wales.  Although the Cabriolet was normally offered only as a two-seater, this car was specially fitted with rear seats for the young Princes William and Harry.

The Princess used this car from 1987 to 1991, and it was then acquired by the Jaguar Daimler Heritage Trust in return for a contribution to her charity.  Princess Diana was the third generation of the Royal family to have chosen Jaguars for personal transport.  The Jaguar Daimler Heritage Trust is proud to preserve Princess Diana’s car together with the Jaguar Mark VII originally used by HM Queen Elizabeth the Queen Mother, and cars used by HM The Queen.

Originally, the XJ-S had only been available with the closed coupé body, but in response to demand for a soft-top version, the Cabriolet model was introduced in 1983.  Also in this year, the XJ-S became the first Jaguar model to be fitted with the new AJ6 3.6 litre six-cylinder engine, as an alternative to the V12.  The Cabriolet model was at first only offered with the six-cylinder engine, although a V12 Cabriolet followed in 1985.

The styling of the Cabriolet model was dictated by the window frames which were fixed, and which together with a cross bar supported the rigid targa-type roof panels.  For the rear part of the hood, every car was supplied with both a ‘half hard top’ and a folding soft top.  Although the Cabriolet was a useful addition to the Jaguar range as the most sporting model since the demise of the E-type, especially the AJ6-engined car with manual gearbox, it was still felt by many to be a compromise solution.

In the spring of 1988, Jaguar introduced the Convertible model of the XJ-S, with a fully disappearing soft top, and the Cabriolet version was discontinued after a production run of 5,013 cars.

Jaguar World included a write-up on this car as their ‘FINISHING LINES’ article in their May 2018 magazine.

Diana, Process of Wales and her 1987 XJ-S cabriolet 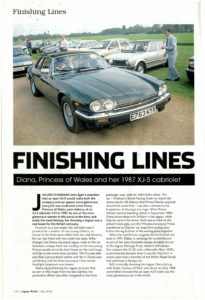 JAGUAR CHAIRMAN John Egan’s assertion that an open XJ-S would make both the company and car appear more glamorous was vindicated when Diana, Princess of Wales, took delivery of an XJ-S cabriolet V12 in 1987.  As one of the most glamorous women in the world at the time, and easily the most famous, her choosing a Jaguar was a real boost for the British company.

However, as a two-seater, the cabriolet wasn’t practical for a mother of two young children, so, similar to the final convertibles from the mid-Nineties, her car was fitted with two small rear seats.  Other changes that Diana requested Jaguar make to the car included a unique fixed rear hardtop so the two young Princes would not strike their heads on the solid targa roof bar in the event of an accident.  The Princess also specified a personalised leather and Harris Tweed seat upholstery, and the American-export four-round-headlight treatment was chosen.

Diana enjoyed driving her Jaguar so much that, as seen in this image from the late Eighties, her protection officer was often relegated to the front passenger seat, with her behind the wheel.  The car – finished in British Racing green to match the Aston Martin V8 Volante that Prince Charles acquired around the same time – was also a witness to the breakdown of the royal marriage.  When Prince William started boarding school in September 1990, Diana drove there with William in the Jaguar, while Charles arrived in his Aston.  Both cars arrived via the school’s back gate, and the Princess and young Prince transferred to Charles’ car away from prying eyes before driving in front of the waiting press together.

When the two Princes outgrew the XJ-S’ small rear seats in 1991, Diana, in exchange for a contribution to one of her own charitable causes, donated the car to the Jaguar Heritage Trust, where it still resides.  She replaced the XJ-SC with a Mercedes-Benz 500SL, a controversial decision since it was the first time in recent years that a member of the British Royal Family had purchased a foreign car.

Still, in initially choosing the Jaguar, Diana (along with Sarah, Duchess of York, who drove an early 1988 convertible) showed that an open XJ-S really was the most glamorous car in the world.

Reproduced with permission of Jaguar World magazine (May 2018)

Jaguar Driver magazine of December 2021 included an article, submitted by Tony Merrygold, entitled ‘Di… Another Day’ detailing a couple of problems that manifested when the car was used to support a Mission Motorsport event at Bicester Heritage. 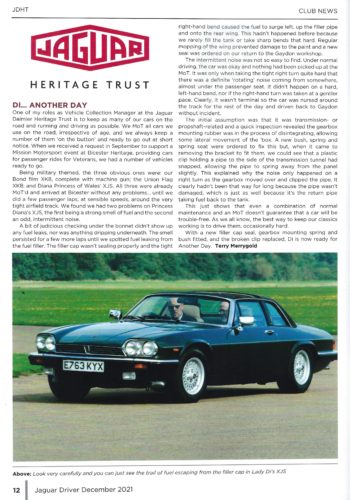 One of my roles as Vehicle Collection Manager at the Jaguar Daimler Heritage Trust is to keep as many of our cars on the road and running and driving, as possible.  We MOT all cars we use on the road, irrespective of age and we always keep a number of them ‘on the button’ ready to go out at short notice.  When we received a request in September to support a Mission Motorsport event at Bicester Heritage, providing cars for passenger rides for Veterans, we had a number of cars ready to go.

Being military themed, the three obvious ones were our: Bond film XK8, complete with machine gun; Union Flag XK8 and Princess Diana’s XJS.  All three were already MOTed so arrived at Bicester without any problems.  But then doing a few passenger laps, at sensible speeds, round the very tight track on the airfield we found we had two problems on Princess Diana’s XJS.  The first was a strong smell of fuel and the second an odd intermittent noise.

A bit of judicious checking under the bonnet didn’t show up any fuel leaks nor was anything dripping underneath.  The smell persisted for a few more laps until we spotted that fuel was leaking from the fuel filler.  The filler cap wasn’t sealing properly, and the tight right-hand bend caused the fuel to surge left, up the filler pipe and onto the rear wing.  Regular mopping of the wing prevented damage to the paint and this hadn’t happened before as we rarely fill the tank or take sharp bends that hard.  A new seal was ordered on our return to the Gaydon workshop.

The intermittent noise was not such an easy find.  Under normal driving the car was ok and nothing had been picked up on the MOT.  It was only evident when taking the tight right turn quite hard and was a definite ‘rotating’ noise coming from somewhere, almost under the passenger seat.  It didn’t happen on a hard left bend, nor if the right-hand turn was taken at a gentler pace.  Clearly not terminal, so the car was nursed around for the rest of the day and driven back to Gaydon without incident. 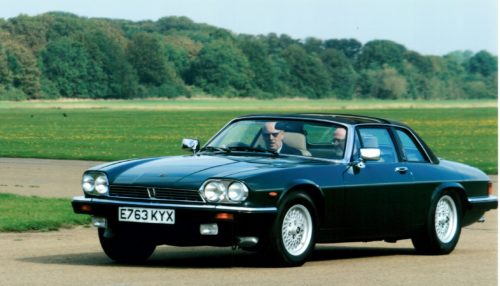 The initial assumption was that it was transmission or prop shaft related and a quick inspection revealed the gearbox mounting rubber was in the process of disintegrating, allowing some lateral movement of the gearbox.  New bush, spring and spring seat were ordered to fix this.  When it came to removing the bracket to fit these, we could see that a plastic clip holding a pipe to the side of the transmission tunnel had snapped, allowing the pipe to spring away from the panel slightly.  This explained why the noise only happened on a right turn as the gearbox moved over and clipped the pipe..

It clearly hadn’t been that way for long as the pipe wasn’t damaged, which is just as well as it is the return pipe taking fuel back to the tank.

This just shows that even a combination of normal maintenance with an MOT doesn’t mean that a car will be trouble free.  As we all know the best way to keep our classics working is to drive them, occasionally hard.