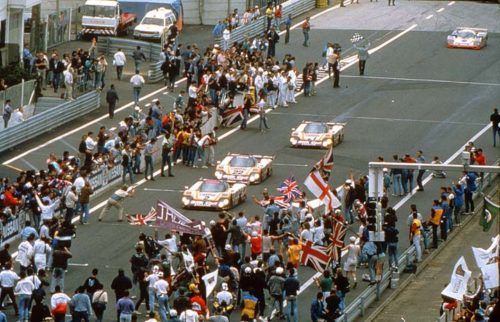 The long awaited return to Le Mans came in 1984 when Jaguar teamed up with the American Group 44 team who designed and produced a sports racing car around the Jaguar V12 engine.

Two cars were entered for the 1984 race but both failed to finish.

In 1985 a Group 44 car managed to finish the race in thirteenth place, winning the GTP category, the first time in twenty-two years that a Jaguar had been classified as a finisher.

Following the success of Tom Walkinshaw and his TWR Racing Team which dominated the European Touring Car Championship with the Jaguar XJS, TWR were given the task of designing a sports racing car to win Le Mans for Jaguar.  The cars that were entered in the 1986 and 1987 Le Mans all performed well but luck was not on their side, they all succumbed to failures that were incidental rather that fundamental to the cars’ design or construction.

A full description of the run-up to the 1988 Le Mans win and some background on TWR and the XJR- appears on the 1988 XJR-9 page in the Jaguar Engineering section of the website.

Filmed at Silverstone on 4 November 2015, this event re-united race driver Andy Wallace with the 1988 Le Mans winning XJR-9.  Andy drove several laps of the full F1 circuit at Silverstone in the XJR-9 as well as in the latest 2016 MY Jaguar XJR.

The new XJR features full LED headlamps and the film focuses on the advances in headlamp and lighting technology since 1988 – when even the 200 mph race cars had to make do with tungsten halogen lamps!

This was Jaguar’s year in sports car racing, as 1988 also saw Jaguar take the world championship with wins in six out of ten Group C races.  The Le Mans victory was repeated with the XJR-12s which came first and second in 1990, and another world championship fell to Jaguar in 1991, although the best placing at Le Mans that year was second.  In 1993, an XJ220C won the GT class at Le Mans, in Jaguar’s latest appearance at the Sarthe circuit to date.  And the Jaguar may yet one day return to its favourite hunting ground.

Le Mans was the only time this car (488) ever finished a race and it was withdrawn from racing and passed to the Jaguar Daimler Heritage Trust collection.

It has since been demonstrated at a number of Historic Races and motoring events over the years, including Goodwood and Coventry Motofest, but never run again at full race pace.