This particular DS420 was originally supplied to Her Majesty the Queen Mother, replacing an earlier car of the same model that Her Majesty had used, and while in her ownership it was registered NLT 2, one of several NLT numbers found on cars owned by The Queen Mother.  This car, finished in the traditional Royal colours of black over claret, was in fact the second from last of the DS420 range.

The Queen Mother decided that her Jaguar and Daimler cars should eventually return to the Jaguar Company’s museum, which duly happened after Her Majesty passed away in 2002.

When Jaguar merged with the British Motor Corporation in 1966, both companies manufactured limousine models, the ageing Daimler Majestic Major and the Vanden Plas Princess 4 litre.  It was decided to replace both of these older models with a single new limousine, which would bear the Daimler name and would be based on Jaguar components, but which would be assembled in the Vanden Plas factory at Kingsbury in London.

The result was the DS420 which was launched in 1968 and co-incidentally became the first new model of the newly-merged British Leyland company.  It was based on an extended floorpan from the Jaguar 420G, which made the DS420 the biggest ever British car with unitary body construction.  The engine was the well-known Jaguar XK in 4.2 litre form, with an automatic gearbox as standard.  The semi-razor-edged style of the body was probably inspired by some of the classic Hooper bodies on Daimler chassis. 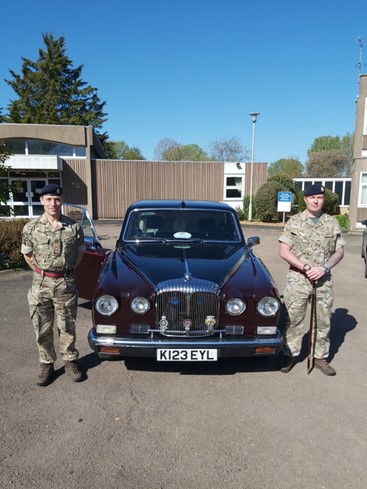 Being both a limousine and having its Royal connection the Trust receives numerous requests to use this car, and while we are happy to keep it running and driving we are normally fairly selective about its use.  We were happy in April 1991 to provide this to our local Army depot – CAD Kineton for the retirement of the Station Commander Lt Col J Williams RLC.

Without his knowledge, his Regimental Sergeant Major – RSM Banks RLC contacted us and asked us to provide this car so that he could be chauffeured off the Station for the final time, in style.  We are always happy to support CAD Kineton as their staff do a lot of STEM education work with the British Motor Museum, so with military precision and secrecy, we delivered the car and hid it one of the service garages that the Lt Col would definitely not visit for a couple of days.

It was wheeled out on cue for his final journey and he was driven off the Station by  Station Master Driver WO2 N Gillan.

RSM Banks graciously wrote this up in full as a gesture of thanks to JDHT – click on the link below for the full story.