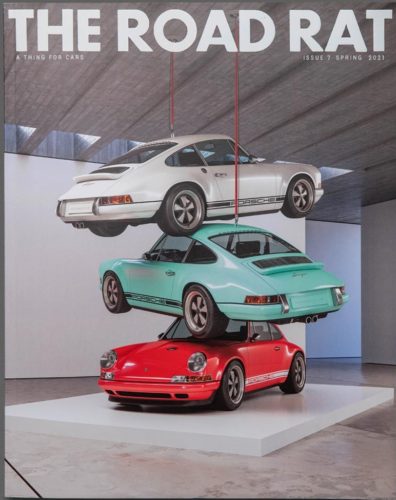 This XJ220 was photographed for the Spring 2021 issue of The Road Rat magazine, to illustrate an article describing the genesis of both the XJR15 (by TWR) and the XJ220 (by Jaguar). A very interesting read.

The XJ220 is the most extraordinary car ever to bear the name Jaguar.  This car, K994 YUD, is number eight of ten prototype and development cars from when the XJ220 went into production.

The XJ220 concept car was made by a dozen of specialist engineers and designers, on a voluntary basis in their own time, with help from about forty of Jaguar’s suppliers. The team behind the car became famous as ‘the Saturday club’. The result of their labours was unveiled by Sir John Egan at the International Motor Show in the National Exhibition Centre on 18 October 1988.

XJ220 was the brainchild of Jaguar’s chief engineer,  Professor Jim Randle, who originally planned to make a Group B car, equally at home both on the road and the racetrack – a limited production supercar, to match the Ferrari F40 and the Porsche 959.  He came up with the basic concept in December 1984 over the Christmas  period making the original central tub out of cardboard.  He later joked that this was the first car to be designed using CAD – Cardboard Aided Design.  Engineering and styling work began in early 1985.  The designer responsible for the shape of the car was Keith Helfet, the South African born Royal College of Art graduate who had become Jaguar’s senior sports car designer, and later designed the XK180 and F-type concept cars.

The XJ220 concept car had chassis, engine and drive train based on the Jaguar Group C racing cars, with the addition of a prototype four wheel drive system.  At the same time, it offered traditional Jaguar qualities, with a superb leather interior, and the beautifully shaped aluminium body.  It was never intended to be a production car, merely a demonstration of the company’s abilities.  However, demand for the car was so great that a feasibility study was carried out, and in late 1989 the project was approved.

From 1992 to 1994, a total of 281 XJ220 cars were produced by Jaguar Sport, a joint venture between Jaguar and Tom Walkinshaw operating in a factory at Bloxham in Oxfordshire, which later became the Aston Martin DB7 factory.  The production car was somewhat different from the concept, with a TWR V6 engine and rear wheel drive only, and originally sold at a list price of £400,000.  The top speed was around 213 mph (343 km/h), as measured in independent road tests – enough for the XJ220 to claim the title of the fastest production car in the world at that time.