The long line of Daimler limousines finally came to an end in 1992 with this car, the last example of the DS420 range.  It was also the last car to use the 44-year old Jaguar XK engine design. 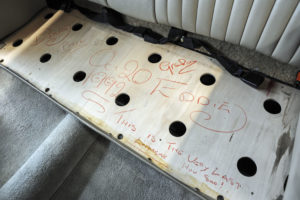 Signed panel below the rear seat cushion reads:
Oct 20 1992 – This is the very last. How Sad!
Signed by: Dave, Phil, Graham and Eddie.

There is a long-held tradition in the motor industry for workers to sign the last version of a particular model.  In some instances the bodywork of the entire car is signed, but in the case of this DS420, as it was hand built by a small term of  craftsmen, they just signed the wooden panel beneath the rear seat cushion.

When Jaguar merged with the British Motor Corporation in 1966, both companies manufactured limousine models, the ageing Daimler Majestic Major and Vanden Plas Princess 4 litre.  It was decided to replace both of these older models with a single new limousine, which would bear the Daimler name and would be based on Jaguar components, but which would be assembled in the Vanden Plas factory at Kingsbury in London.

The result was the DS420 which was launched in 1968 and co-incidentally became the first new model of the newly-merged British Leyland company.  It was based on an extended floorpan from the Jaguar 420G, which made the DS420 the biggest ever British car with unitary body construction.  The engine was the well-known Jaguar XK in 4.2 litre form, with an automatic gearbox as standard.  The semi-razor edge style of the body was probably inspired by some of the classic Hooper bodies on Daimler chassis

The basic bodyshell was supplied by Motor Panels in Coventry and mechanical components were fitted by Jaguar at Browns Lane, before the limousines were sent to Vanden Plas for final assembly and trim. The Vanden Plas factory closed in 1979, final assembly and trim moved back to a special Limousine Shop in the Jaguar factory at Browns Lane in 1980.

The DS420 enjoyed a near monopoly of its market, and many were also supplied in chassis form for hearse bodywork.  Otherwise these cars were used by anybody who was somebody, from Royalty to Ambassadors, from captains of industry to Lord Mayors.  Many were used by limousine hire companies.  The production figure over the 24-year span of the model was just over 5,000 cars and chassis.