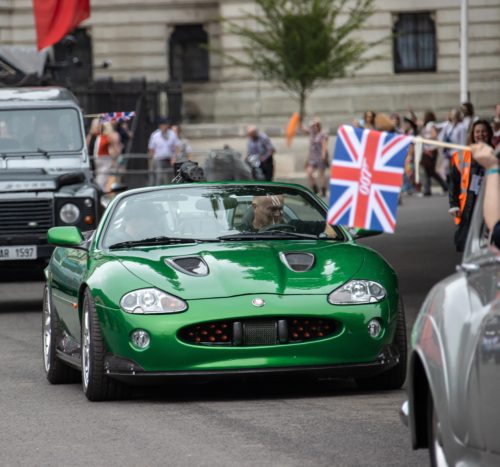 Our XKR from the Bond film ‘Die Another Day’ had a day out on Sunday 5 June 2022 – taking part as one of the James Bond cars in the Queen’s Platinum Jubilee Pageant processing up The Mall to Buckingham Palace – in front of a UK TV audience of over 13 million people.

The film Die Another Day released by MGM Studios and EON Productions in November 2002 was the 20th film in the James Bond series, the most successful film series of all time.  In this film, the hero was once again to be found behind the wheel of an Aston Martin, following the tradition from the 1960s when an Aston Martin was first used by James Bond in the film Goldfinger.  In the years in between, many other makes of car have featured in the Bond films.

So while the Jaguar XKR undoubtedly had an important role in Die Another Day, it was the villain’s rather than the hero’s car.  The Jaguar XKR was the car of Zao, played by Rick Yune.  The XKR was seen as an appropriate match for Zao, combining a sleek exterior with a heart of power and ferocity.  The car was equipped with a Gatling gun mounted centrally behind the seats, while further armaments included missiles fired through the front grille, rocket launchers in the doors and mortar bombs in the boot.

There were in fact no less than eight Jaguar XKR cars used in filming.  Half of these were standard cars with only cosmetic modifications, the rest were rather more special as they were built on a complete four-wheel drive chassis, apart from having all the weapons systems.  The work was done in the Pinewood Studios workshops in England.  Of course, from the outside all the cars looked the same, and all were finished in the same metallic light green that was used for the Jaguar Racing Formula One Grand Prix cars.

The reason why it was necessary to re-build both the Jaguar, and Bond’s Aston Martin, with four wheel drive, is that these cars featured in one of the most amazing sequences in the film, a dramatic car chase on ice, filmed on location in Iceland in early 2002.  For this reason, some of cars were also fitted with Icelandic number plates.  And to find out how the chase ended, you will have to watch the film for yourself! Click on YouTube link below!