This car was used by HM The Queen for her private motoring for two years, until returned to Jaguar for preservation by the Jaguar Daimler Heritage Trust (JDHT) in 2004.  As well as having seen Royal use, this particular car is also of historic interest as being the very last of the Jaguar and Daimler X308 range, built in July 2002.  The order had already been placed for the ‘last of the line’ to come to the JDHT, in blue, when the order was placed for The Queen so it was delivered in blue rather her normal choice of British Racing Green.

No other British car has such a long and distinguished heritage as Daimler.  Since the first Daimler cars were made in Coventry in 1896, the marque has established an enviable reputation for superior quality and luxury.  When Daimler became part of Jaguar in 1960, the distinction of the marque was not only preserved but enhanced.  The unrivalled Daimler coachbuilding tradition was revitalised by Jaguar design flair.  A Daimler car offers a remarkable blend of technology, refinement and class-leading performance.

The Super V8 saloon was introduced in 1997 as part of the revised X308 range, where the new AJ-V8 4-litre engine replaced the previous six-cylinder and V12 engines.  There were two versions of Daimler available: the V8, and the Super V8 with a supercharged engine, both shared the same long wheelbase four-door saloon body, and both were equipped to a very high standard of luxury.

One of the proudest traditions in Daimler history was that since 1900, when the then Prince of Wales, later HM King Edward VII, purchased his first Daimler car, Daimlers were used by British Kings and Queens, as well as other members of the Royal family, for official occasions, and for private motoring.  More than 100 Daimlers were made for British Monarchs, ranging from state cars to saloons for private motoring, and even a few utility vehicles such as shooting brakes.

When this car came to JDHT in 2005 it had approximately 7,000 miles on the odometer so we have made sure that we only use it sparingly.   In preparation to take the car to a number of events during 2022, to mark HM The Queen’s Platinum Jubilee, we MOTed it in February having only completed 5 miles since its last MOT in 2019.

Having received a lot of Jubilee related attention we were preparing to put the car away for the winter and then on Thursday 8 September we heard the announcement that HM The Queen had passed away. 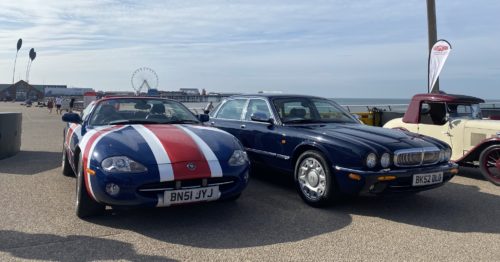 We were in the final throes of preparing for the Trust’s Swallow Sidecar Centenary Celebrations at Blackpool, for the weekend of Friday 9 to Sunday 11 September.  Knowing that BK52 DLO was roadworthy, taxed and MOTed we fuelled it up and drove it to Blackpool on the Friday.

We had taken 17 of our vehicles to be displayed in a Timeline organised by the Jaguar Enthusiast’s Club on the Tower Headland section of the Promenade in front of Blackpool Tower.

We parked BK52 DLO off to one side, out of the Timeline, suitably next to our Union Flag painted Jaguar XK8 and word quickly spread that we had ‘The Queen’s Car’ on display.   Over the weekend we think that more people came to pay their respects at ‘The Queen’s Car’ than came to see our ‘Crown Jewels’ from the Jaguar Daimler Heritage Trust Collection of Swallow and Jaguar vehicles.