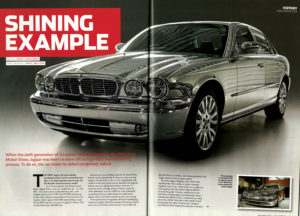 This car is an early pre-production X350 (v8 engine XJ), which was specially finished in polished aluminium to show off the new body material.  Together with a similarly-finished left-hand drive car, it was used for the launch presentation and motor show displays, before it was presented to the collection of the Jaguar Daimler Heritage Trust for preservation.  The X350 went on general sale in April 2003.

The polished X350 was featured in the December 2017 edition of Classic Jaguar magazine.

The X350, so-called after its project code number, was introduced to the public at the motor shows in the autumn of 2002 and was the seventh generation of the Jaguar XJ saloon.  It was the latest member of a family of cars that began in 1968 and by the time the X350 was introduced, had reached a total production of over 800,000 cars.  As the largest and most prestigious of the three Jaguar saloon ranges, the new XJ was an up-to-date version of the classic Jaguar theme, and remained the company’s flagship.

The new car included many advanced features, notably the all-aluminium unitary construction bodyshell, a six-speed automatic transmission and an air suspension system with double wishbones front and rear.  Styling and proportions were clearly inspired by its forebears.  Despite this, the X350 offered considerably more interior room and boot space than any previous XJ saloon, mainly achieved by building the car taller, while the aluminium construction helped to keep weight down.

After an absence of a six cylinder XJ model for some years, the new range again included an XJ6, fitted with the 3 litre V6 engine also used in the S-TYPE and X-TYPE.  The XJ8 featured the well-known Jaguar V8 engine, now with capacities increased to 3.5 litres and 4.2 litres, and fitted with a supercharger in the top-of-the-line XJR version.  The X350 cars were built in Jaguar’s traditional home factory at Browns Lane in Coventry, with bodyshells supplied from Castle Bromwich and engines from Bridgend in Wales.