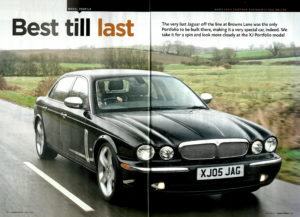 This Jaguar XJ8, a long wheelbase Super V8 in Black Cherry to the very special ‘Portfolio’ specification, is a very historic car. It was the last car to be built in the Browns Lane factory, on 1 July 2005, before X350 production was moved to the Castle Bromwich factory.

XJ05 JAG was featured in the April 2020 edition of Jaguar World magazine.

It was presented by Jaguar’s Chairman Joe Greenwell to the Jaguar Daimler Heritage Trust for preservation.

The X350, so-called after its project code number, was introduced to the public at the Motor Shows in the autumn of 2002, and was the seventh generation of the Jaguar XJ saloon.  It was the latest member of a family of cars that began in 1968, and as the largest and most prestigious of three Jaguar saloons, the new XJ was an up-to-date version of a classic Jaguar theme, and the company’s flagship.

The XJ8 featured the well-known Jaguar V8 engine, now with capacities increased to 3.5 litres and 4.2 litres, and fitted with a supercharger in the top-of-the-line XJR version.  The X350 cars were at first built in Jaguar’s traditional factory at Browns Lane in Coventry, with body shells supplied from Castle Bromwich and engines from Bridgend in Wales.