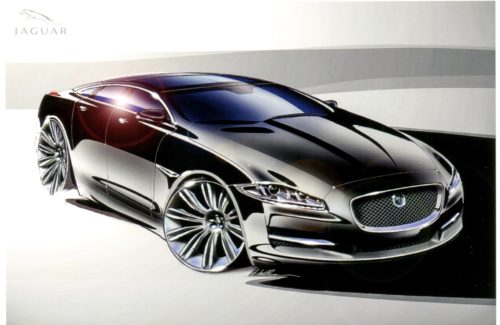 This car is an early production example of the Jaguar XJ Saloon fitted with the 3.0 V6 diesel engine and was gifted to the Jaguar Daimler Heritage Trust in January 2010 for preservation.

The all-new XJ (codenamed X351) launched in 2010 was the eighth generation of Jaguar’s flagship saloon and the first to incorporate Design Director Ian Callum’s new design language initiated with the XK in 2006.  It was unveiled by US TV celebrity Jay Leno at the Saatchi Gallery in London on 9 July 2009 and the US model was subsequently launched at the 2009 Pebble Beach Concours d’Elegance.  Production began in March 2010, with sales commencing from May.

It was the first model to feature the next-generation of Jaguar’s aerospace-inspired body architecture, constructed primarily of aluminium, but also using magnesium and composite alloys.  The XJ was claimed to be the lightest car in its class by 150 kg at its launch.  The new XJ introduced very high standards of personal luxury and specification, including an innovative panoramic glass roof as standard and a level of choice in colours, veneers and leathers not seen before in a Jaguar.  Four trim levels were offered at launch – Luxury, Premium Luxury, Portfolio and Supersport.

As with its predecessor, the New XJ offered a choice of standard or long wheelbase models, the latter having an extra 125 mm of legroom.  At launch, three of Jaguar’s new ultra-efficient Gen III petrol and diesel engines were available in the new XJ – the 3.0-litre 275 PS V6 diesel, 510 PS 5.0-litre supercharged V8 and a 5.0-litre 385 PS naturally aspirated petrol engine.  In 2012, 3.0-litre V6 Supercharged and 2.0-litre I4 Turbocharged petrol engines were added to the line-up, the latter primarily for the growing Chinese market.  A flagship XJR model was launched in 2013 featuring an uprated 5.0-litre supercharged V8 engine producing 550 PS and 680 Nm of torque.

The new XJ featured state-of-the-art technologies including a 12.3-inch high-definition ‘virtual’ instrumentation display to replace conventional dials and a ‘dual-view’ 8-inch touchscreen that enabled driver and front seat passenger to view different content on the screen at the same time.  In February 2015, a significant milestone was reached when the one millionth Jaguar XJ to be produced came off the production line at Jaguar’s Castle Bromwich plant – 47 years after the original XJ6 was launched in 1968.