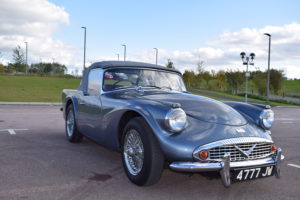 4777 JW was displayed on the Daimler and Lanchester Owners Club stand at the Classic Motor Show at the NEC from Friday 8th to Sunday 10th November 2019 – Stand 820 in Hall 2 where it attracted a lot of interest.   Its is now back on display at the Collections Centre at the British Motor Museum at Gaydon.

This car is the later ‘B spec’ SP250 and dates from April 1961 by which time the Daimler company was owned by Jaguar and problems with chassis and body flex had been resolved.  It was originally sold in Wolverhampton in 1961 and from 1974 to 1989 was owned by the well-known Daimler SP250 specialist David Manners.  In 1989 it was bought by the British Motor Industry Heritage Trust, and transferred to the Jaguar Daimler Heritage Trust in 1991.

It was later refurbished in its original colour of Mountain Blue, although with red trim rather than grey, with the assistance of Jaguar’s Special Vehicle Operations Department.

2019, being the 60th anniversary year of the launch of the Daimler SP250, gave the Trust a good excuse to take the car off display in the Collection Centre and use it on the road.  To start with we took it out for a 50 mile road test and made a list of what work needed doing.  We drove it to the SP250 Owners Club dinner at St John’s Hotel in Solihull, where it was mentioned by David Manners during his after dinner speech.  The following day we took it to the SP250 60th Anniversary Rally on 15th June at Ragley Hall where it was parked up in one of the blue lines in the ‘Diamond’ display.

In preparation for all this we put it through the JDHT workshop at Gaydon for a service and the following work was completed: 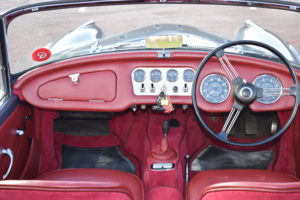 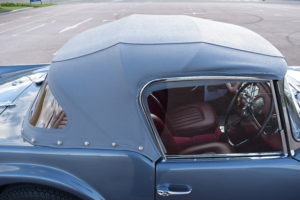 The paintwork and chrome work are all in good condition but there were a few nicks in the hood and a small split that had been repaired some years ago.  We thought these let the car down so we had a new hood and hood bag fitted by Jaguar Land Rover Classic Works – who also fitted a new set of carpets.

The car was displayed at the Classic Motor Show at the NEC from 8th to 10th November and driven there and back from Gaydon.  If you may be interested in purchasing this car then email Tony Merrygold,  Vehicle Collections Manager at the Jaguar Daimler Heritage Trust.  The car can be viewed at Gaydon by prior arrangement and a test drive organised if required.