Managing Director of BSA and Chairman of Daimler Company 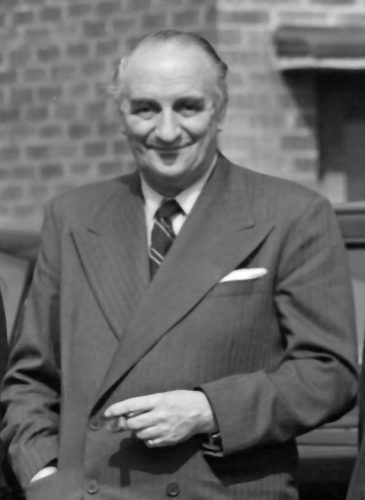 At his father’s behest he trained and gained experience in engineering at the Metropolitan Carriage Wagon and Finance Co. Ltd in Birmingham.  Bernard Docker was put in control of the production of tanks for the war effort (WWI) – the company built over 80% of the tanks that took part in the 1914-18 campaign.  Dudley Docker put Bernard on the board in 1918 aged only 22.

In 1920 he made a business trip to South America and soon after his return became the Deputy Chairman of the Metropolitan Carriage Company.

In April 1933 he married his first wife, British actress Jeanne Stuart (née Ivy Sweet), but his father’s control streak raised its head again.  In September the couple went to stay with Dudley for a shooting holiday in Scotland and part way through Jeanne announced she had to return to London.  Dudley did not trust her and had her followed by  private detectives who compiled a dossier proving she was having an affair with actor David Hutcheson.  The couple separated and were divorced in June 1934.

Bernard Docker commissioned the British shipbuilding firm, John I. Thorneycroft & Company to build a yacht to his specification.  In 1938 the MY Shemara was completed which for many years was the largest private yacht in the country.  Bernard Docker was knighted for his work with medical charities in 1939 and in a somewhat ironic twist of fate in the same year the Royal Navy requisitioned the yacht and used it for training for anti-submarine warfare until 1946.

In the early 1940s, with his father’s help he became the Managing Director of the BSA Group, which owned the Daimler Company of which he was also chairman.  The Group also now included coachbuilders Barker and Hooper.  Dudley Docker died in 1944 leaving Sir Bernard the bulk of his £890,000 estate and the task of running most of ‘his’ business empire.  Sir Bernard also became chairman of the Midland Bank.

The Motor wrote up the event: “An historic occasion last week was the lunch given by the Daimler Motor Co. Ltd, at the Savoy Hotel on Tuesday, February 12, to mark the celebration of the 50th anniversary of the formation of the company.  Sir Bernard Docker presided over a gathering numbering about 250, and each guest was presented with a memento in the form of a Daimler radiator.  After a telegraph sent to H.M. The King, and the royal response had been read, Lord Brabazon of Tara, one of the oldest motoring pioneers, led the speeches with the toast of the Daimler Co.  He said that it was more than a toast to one company for it was a tribute to the whole industry.
‘Brab’ said that he had never owned a Daimler, as he always went in for ‘cad’s cars’ but he always went as a passenger, for often he was the only one who could start the damn things.  The company had always been progressive, a notable example being the adoption of the preselector gear and the fluid flywheel.  No doubt there would be many changes of design in the future, but he hoped that we would always retain the famous Daimler radiator.
Sir Bernard Docker responded, and said that the scattering of the Daimler units in war-time, after the main factory was blitzed in 1940, had necessitated driving many thousands of miles and had not been the means of testing prototypes of the post-war cars.  He had been an owner-driver for over 30 years and the new models had given him great satisfaction.”

In November 1946 Sir Bernard and managing director of Daimler, George Hally, attended a Daimler cars exhibition at Hooper’s showrooms which targeted the U.S. market.  Hooper’s were one of the companies building bodies on the DE36 chassis which was launched in 1945.  This was the last Daimler to be fitted with a straight-eight engine of 5,460 cc and examples of the DE36 were supplied for the use of HM King George VI, both as state cars, and for the Royal tours abroad.  By the time production ceased in 1953, 215 DE36 chassis had been built.

Apart from the formal types of bodywork, a few DE36s were also made with bodies intended for the owner driver.  In the first post-war motor show at Earls Court in London, the 1948 British International Motor Show, Hooper showed a remarkable five-seater drophead coupe with streamlined bodywork.  The coachwork was painted jade green with green-piped, beige leather interior and the car became known as the ‘Green Goddess’. 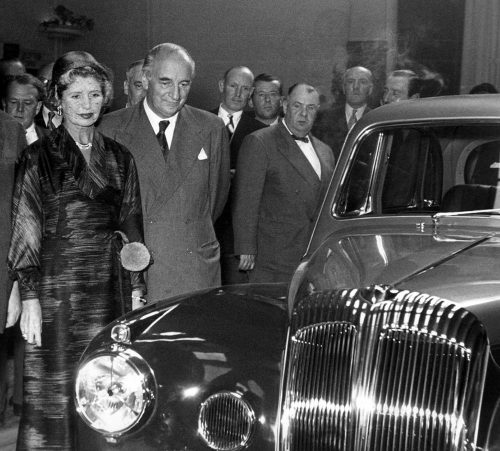 She was previously married to Clement Callingham, the head of Henekeys wine and spirits merchants, until his death in 1945.  A second marriage followed, to Sir William Collins, the president of the upmarket department store in London, Fortnum & Mason, who died in 1948.

Lady Docker inspired the extravagantly finished ‘Docker Daimlers’, exhibited at the Motor Shows from 1951 to 1955, two of which were built on the DE36 chassis: ‘The Gold Car’ and ‘Blue Clover’.

These ‘Docker’ cars came out at the rate of one per year for the Motor Show and captured all the publicity. Newspapers seemed unable to get enough of them or of Lady Docker’s exploits.

Unfortunately, over the years these cars stole the limelight from what was really on offer from Daimler, such as the new three-litre DF 302 Regency saloon and Convertible Coupé.  Increased purchase tax was also not helping sales of Daimlers, and early in 1953 production of the 3-litre was suspended to ‘enable the planned production to be maintained and to protect the employment of the 4,000 workers involved in car production.’

Lady Docker was always in the public eye, sometimes of her own volition, sometimes of her own making.  The Dockers often went to Monaco.  In September 1952 she slapped a waiter from the Monte Carlo Casino in the face, resulting in the Dockers being banned from the Casino.  The press stories surrounding this event were discussed in Parliament including raising questions about how much money the Dockers had taken out of the country during a period when people were only allowed to take out £25 each.  The negative publicity arising from this episode, the possibility of a court case about the currency issues and the fact that Sir Bernard hadn’t attended a board meeting of the Midland Bank since 1948, caused the Directors to ask for his resignation in January 1953.

By 1956 the Daimler Company was not in good health and neither was the top management.  Problems at board level and accusations between members of the board and the Dockers had come to a head.  While the Dockers were in Monaco the board set out their plans and Sir Bernard Docker was asked to attend a meeting of directors at Claridge House on 30 May 1956.  He was voted out of office by six directors against three and a new management team took over the ailing company. Jack Sangster of Triumph Motorcycles (a BSA company since 1952) took over as chairman and managing director of Daimler. Lady Docker’s brother-in-law, Mr R.E. Smith, also left his position as general manager ‘by mutual agreement’.

The Dockers fought back with letters and telegrams to the shareholders and even adverts on commercial television, pleading their case for unfair dismissal, but it was of no avail when all the true facts of their excesses came out.  The Dockers did, however, force an extraordinary meeting on 1 August, which was attended by 1,300 shareholders, but they were outvoted when the Prudential Assurance Company, one of the larger shareholders, backed the board.  The Dockers had spent some £20,000 on their campaign and had to admit defeat. They remained defiant and to show their contempt for BSA-Daimler, they purchased two Rolls-Royce Silver Clouds for their personal use.

Without a main source of income, the Dockers’ money was running out. Their estate in Hampshire was sold and the MY Shemara was put on the market for £600,000, but only sold for £290,000.  In 1965 the Dockers became tax exiles after moving to Jersey in the Channel Islands.

Sir Bernard Docker died on 22 May 1978, at the age of 82, in the nursing home he had been living in since 1976.  He was buried in Lady Docker’s first husband’s family plot at the churchyard of St James the Less in Stubbings. In 1983 Lady Docker was buried in the centre of the same plot with Sir Bernard on one side and Clement Callingham on the other side of her grave.

Postscript: Sale of Daimler to Jaguar

Daimler finances continued to be precarious throughout the remainder of the 1950s with sales down and the Radford factory in Coventry in sore need of modernisation which Sangster was not willing to sanction.

Sir William Lyons was looking for factory space as the government would not allow him to expand the Browns Lane site in Coventry.  Lyons set his sights firmly on Daimler’s Radford factory, which covered one million square feet (92,903 sq/m), and approached Sangster on a personal basis, without consulting the Jaguar board of directors.  The BSA board were not keen on selling the factory, but instead offered to sell the whole of the Daimler Company to Lyons.  Jaguar’s accountants met with their counterparts from Daimler to assess the net value of Daimler and Lyons agreed a price of £3,250,000 plus the excess of Daimler’s current assets over current liabilities, subject to the accountants’ report.

On 26 May 1960 the BBC 7 o’clock morning news announced that Jaguar had bought the Daimler Motor Company and its assets, including the Radford factory.