These days we hear a great deal about electric vehicles and hybrid drive, but Daimler pioneered the concept over a century ago. 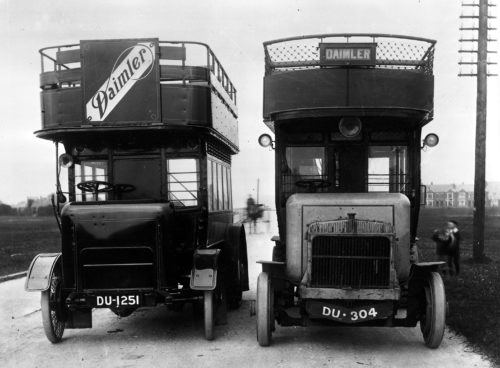 When the internal combustion engine first arrived on the scene it was regarded as a passing fancy and that the use of horses in town and country would continue as normal, but in time the value of the new engine was proven and the horse began to be put out to pasture.  Initially, both horse-drawn and horseless carriages were used side-by-side; indeed it was not until after World War Two that the majority of horse-drawn vehicles finally disappeared from the streets of London.

One of the major improvements made in Victorian England was the transport system that linked cities and towns with greater ease.  The railways spearheaded this revolution and took over from the old mail and stage coaches.  However, in the large cities like London, Birmingham, Manchester and Liverpool, the horse-drawn omnibus began to appear. Now people could visit friends and relatives in comfort and ease within the metropolis.  These omnibuses were festooned with advertisements and served as a travelling billboard.  There was money to be made and Victorian businessmen were quick to seize the opportunity.  By the early years of the twentieth century motorised buses that were quicker and more comfortable joined the horse-bus.  Horse-drawn omnibuses soon disappeared from the main cities and the age of the motor bus had arrived.

One of the leading suppliers of chassis for double-and single-deck omnibuses was Coventry-based Daimler.  They also manufactured complete buses and by 1910 their products were to be found all over the British Isles as well as in the Empire.

In 1906, the Daimler Company acquired the British rights to manufacture road and rail vehicles using the system from Auto-Mixte SA, a Belgian company based in Herstal which produced petrol-electric vehicles.  The propulsion system had been devised by Henri Pieper. His system linked a dynamo to a petrol engine which charged a bank of accumulators – or batteries – during normal running and then switched to become an electric motor for starting and hill-climbing.  Daimler agreed to pay a royalty of £20 per Auto-Mixte chassis it sold with an engine over 20hp and £10 on a chassis under 10hp.  The management were confident that the deal would be a success and guaranteed a minimum payment of £10,000 by 1 January 1908.

However, the Auto-Mixte transmission system was a problem and, in November 1907, an experimental omnibus with the Belgian fitting ran away from the driver and knocked down part of a wall in the finishing shop, seriously damaging two Daimler cars.  Nevertheless, Daimler proceeded with the hybrid engine and paid Auto-Mixte SA royalties of £5,000 in January 1908 against an order received by the Company for thirteen omnibuses.  They also paid the General Manager of the Belgian firm £2,000 as a deposit for the order.  Unfortunately, continuing problems with the transmission system meant that production of buses that had been ordered was slow.  A finished example of a Daimler-Auto-Mixte double-deck omnibus, built for the Gearless Motor Omnibus Company in London, was shown at the 1908 Olympia Commercial Vehicle Exhibition. 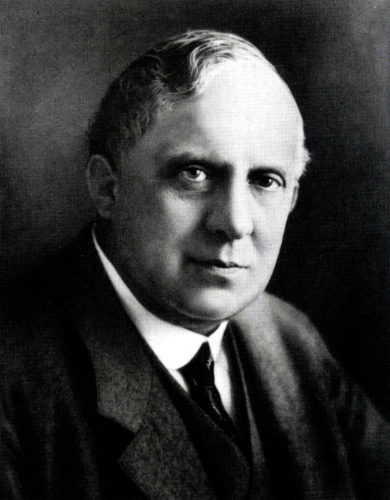 Dr. Frederick Lanchester, who had designed and developed several vehicles for the Daimler Company, turned his attention to the Auto-Mixte system.  He had long been interested in a petrol-electric engine and during 1909 he worked on perfecting the Belgian unit.  By 1910 he had devised a revolutionary omnibus that carried the initials KPL for Knight engines – Pieper electric motors and Lanchester designs.

What made Lanchester’s KPL omnibus remarkable was the fact that it had no separate chassis, it was of unitary construction.  A world-first for a commercial vehicle and a build method that would not reappear on public service vehicles until the 1960s.

The backbone of the KPL was a U-shaped flanged steel channel, the base of which formed the passenger floor; the flanges of the channel were used to anchor the seats.  The channel also had bracings for the fuel tank and attachments to carry the vertical stanchions which held the upper deck.  There were seats for 20 on the top deck and 16 or 18 on the lower, depending on the configuration. 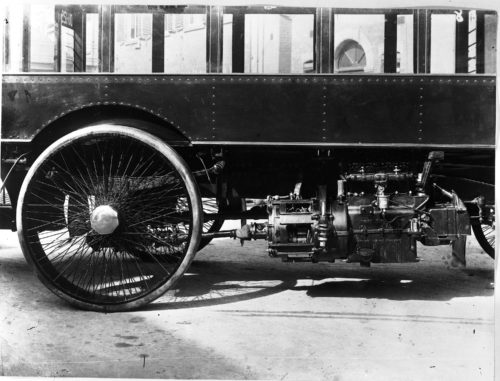 Close-up view of the petrol-electric motors
with their protective covers removed.
The two driveshafts to the rear wheels are clearly visible.
The engines were marked ‘Right Hand’ and ‘Left Hand’.

Lanchester arranged the motors in a novel manner; two Pieper dynamotors were used, one on either side in a frame within the wheelbase.

A Daimler Silent-Knight 1,500 cc sleeve-valve engine was mounted in the same unit with the dynamotor.  Each engine was clearly marked with either ‘Right’ or ‘Left’ to ensure that they were correctly fitted.  Each rear hub was driven by a worm and wheel fed by the prop-shaft from the combined engine unit.

As there was no drive within the rear axle this was a ‘dead’ tubular assembly connecting the two rear wheels.

No differential was required and there were no rear brakes. 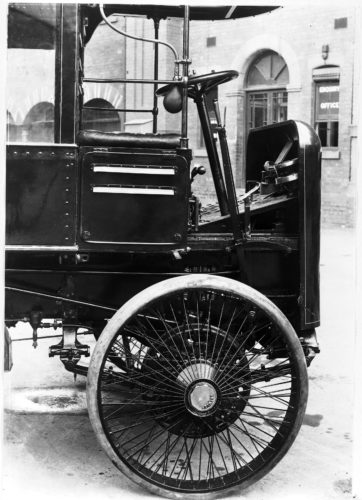 The driver’s position at the very front of the KPL was exposed to the elements. Note the large multi-spoke wheel shod with soft rubber tyres.

At the front a tubular axle carried the wheels and had centre point steering; large brakes were fitted to the front wheels and were operated by double-jointed splined shafts.  They were effective and a Daimler note states that the brakes could stop the vehicle within 15 ft (4.6 m) at its normal speed of 15 mph (24 km/hr).  A pedal operated the front brakes, as did a hand lever that doubled as the parking brake.  Magnetic clutches were fitted on the driveshafts to assist with slowing the engine down and bringing the vehicle to a stop; they were operated by another pedal in the driver’s compartment.

Unlike many of the public service vehicles of the day, which had small eight-spoke wheels and solid tyres, the KPL was fitted with large multi-spoked Rudge-Whitworth wheels which, although narrow in width, are said to have given a comfortable ride on the poor road surfaces of 1910.  Helping the ride, no doubt, was the suspension by long self-damping, multi-leaf, semi-elliptic springs; no shock absorbers were fitted.  Daimler fitted the bank of accumulators to provide starting power and to power the water pump and cooling fan under the floor of the omnibus.

Contemporary notes suggest that the KPL was very quiet; given that the Knight silent sleeve-valve did not run when the omnibus was stationary and the electric motors were also quiet.  It must have been hard to hear the double-deck omnibus approaching, as no gear changing took place and with the large rubber-shod wheels it was very quiet.

There was great interest in the KPL from the engineering fraternity and from potential operators.  Much publicity was generated in the popular press as well as in the technical journals at the time.

We can find out most about how the KPL worked from the Motor Traction magazine of June 1910.

‘There are two levers on top of the steering wheel.  One of them is coupled to the two engine throttles, the other to a common rheostat which regulates the fields of the dynamotors.  For running forward the two dynamotors are in parallel.  For reversing they are placed in series.  The parallel or series positions are engaged by a separate lever when a change of direction is necessary.  The automatic changing of the dynamotors from dynamos to motors is governed by a solenoid, which, when the accumulators are fully charged, closes the engine throttles to reduce the revolutions.  As the accumulators discharge themselves the reduced magnetic force in the solenoid causes the engine speed to increase thus recharging the accumulators.  To slow the omnibus down, the dynamotors can be used by adjusting the steering column levers to reverse the electrical flow and charge the accumulators.’  [In modern (2021) hybrid vehicles we now call this regenerative braking.] 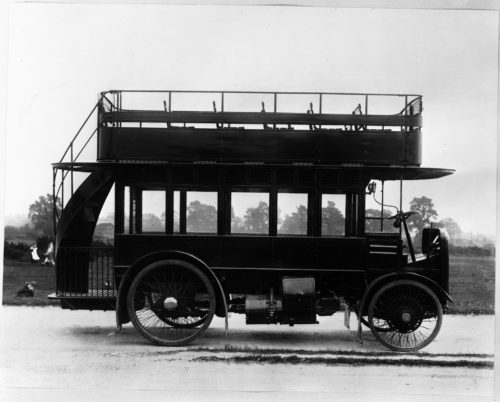 Side view of the Daimler KPL omnibus shows the smart lines of the KPL with large windows for the lower-deck passengers and the neatly covered engine units.

Omnibus operators showed interest and some prototype examples of the KPL were produced.  The exact number manufactured is not known, but it would appear that at least twelve were built.  An earlier incarnation of the Auto-Mixte system was fitted to a standard Daimler omnibus around 1908, but little is known about it.

We have a note from the New York Times dated 11 June 1911, that reads: ‘After five years of experiments costing $250,000, a new motor bus company, with capital of $5,000,000 is being launched in London to put its vehicles not only on the well-defined routes being served by the big company that has a practical monopoly in the metropolis but in many districts which are yet unserved.  Great secrecy has attended the test of the new style motor bus known as the “K.P.L.,” which has satisfied all of the rigid police regulations.’

The article goes on to explain the initials KPL and notes that the Daimler Company and ‘a Birmingham concern closely allied with the Daimler Company’ were financing the venture.  The main interest from the US newspaper was the fact that the sleeve valve engine was the brainchild of American-born Charles Knight.  Quite who the ‘partner’ was is not clear, as those records that survive make no mention of the bus operator.

However, it is worth considering that $5m in 1911 was around £3m and would equate roughly to £60m today (2020).  Daimler’s Birmingham associate would probably have been the main financier and one suspects that, if the release had any basis of truth, it was probably Birmingham City Corporation that was behind the venture.  Whatever the truth, the KPL was not proceeded with and after twelve KPL omnibuses had been built and tested they disappeared from sight.

Daimler, however, used the petrol engine developed for the omnibus in some models for 1911 and the idea of combining the two different power sources was later used by Dr Lanchester for the experimental and remarkable hybrid drive Lanchesters of the 1920s.