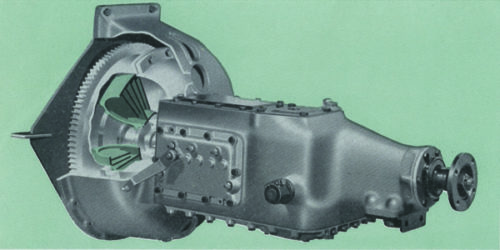 Walter Gordon Wilson had been working with epicyclic gearboxes since World War I and was involved in the development of the armoured Tank.  Work on epicyclics led to him developing his ‘Wilson Gearbox’ which he tested in his own Vauxhall 14/40.  When he showed the innovative gearbox to Vauxhall in 1926, they bought the patent rights.

Compared with the contemporary (non-synchromesh) ‘crash’, manual transmissions, the pre-selector gearbox was easier for drivers to operate smoothly, since they did not have to learn techniques such as double declutching.  It also had faster shift times, could handle greater power outputs, had less mass and could shift under load.  The driver, pre-selected the next gear using a lever mounted near the steering wheel, then pressed the ‘gear change pedal’ (often located in place of the usual clutch pedal) to activate the gearchange at the desired time.

However Vauxhall’s new owners General Motors shelved the Wilson design, as they wanted to promote their own ‘synchromesh easy-change system.’

Wilson contacted John Siddeley (Lord Kenilworth – MD of Armstrong Siddeley) to help get his patents back.  Siddeley was an astute businessman and could see the value of Wilson’s invention for his own cars and, after an out of court settlement with General Motors, the patents were restored to Wilson.  At the London Motor Show in October 1928 car maker Armstrong Siddeley unveiled their new 12 hp six-cylinder model with a ‘pre-selective’  gearbox or ‘self-changing gear’, available as an option.

Wilson and Siddeley (as joint managing directors) setup a new company, Improved Gears on 28 December 1928 and they granted licenses to Daimler, Riley and Talbot Lago to manufacture pre-selector or epicyclic gearboxes.  Having been granted a licence, Daimler adopted and adapted the design and introduced them to their range of cars in 1930. 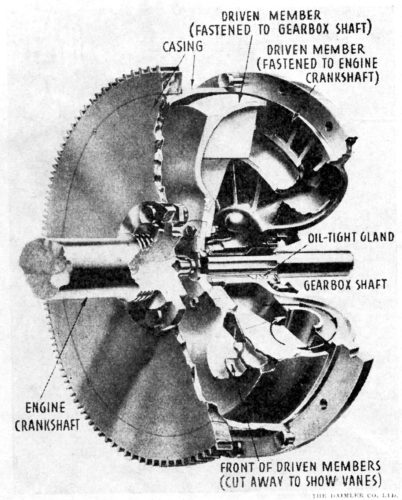 Quite independently, in 1926, Harold Sinclair of Hydraulic Coupling Patents Ltd was working with Dr Bauer of the Vulcan-Werke Shipyard in Hamburg on a method of adapting their fluid flywheel, which had been used on ships, for use with motor vehicle transmissions.  The Vulcan-Werke used the fluid flywheel to drive propellers on steam turbine engined ships.

The principal was a closed casing containing a flywheel (or driving member) and a driven member, both with cups around their rim.  There was no contact between the two driving members and the casing was filled with oil; as the engine revolved faster the driving member pumped oil into the cups of the driven member with increasing force until the energy developed to create the effect of a solid coupling with indiscernible slippage.

Wilson’s pre-selective gearbox incorporated a flywheel and a conventional clutch plate and was different from the Sinclair system, which he termed ‘Fluidrive’.  This was tested on an Associated Daimler bus chassis in February 1928 and showed real promise.  Daimler engineer Percy Martin took up the idea and applied it to a private car.  In May 1930, Daimler introduced the fluid flywheel in conjunction with a conventional gearbox, which did have problems with the transmission running away when it was left in gear with the engine ticking over.  Dr Frederick Lanchester had warned Daimler that this would happen but they ignored his advice and proceeded with the project.  They did modify the unit so that it would not ‘run away’, and a  month later Daimler introduced their new 20/30 hp model with a ‘self-changing’, epicyclic transmission that could be controlled using a lever mounted on a quadrant just below the steering wheel.

This gave the driver what was virtually automatic transmission; for all the driver had to do to engage a gear was to move the lever to the appropriate notch on the quadrant and depress the ‘clutch’ pedal, gear changing was made simple.

Armstrong Siddeley promoted their version especially ‘for ladies’ and made much of the ‘easy change’ to take the strain out of motoring as their advertisements proclaimed.  One visitor to the Daimler stand was from Cadillac and he bought an example of the 20/30 hp model to study the fluid flywheel and pre-selector system.  Cadillac took it apart and used the basis to develop their Hydramatic automatic transmission.

The Daimler implementation of the Wilson pre-selector gearbox used the fluid flywheel which acted, not only as the flywheel but also as a clutch.  Armstrong Siddeley opted for a centrifugal clutch.  There were two main members, an outer casing bolted to the engine crankshaft and an inner casing, which was free to revolve independently inside the outer casing, bolted to the gearbox shaft.

Daimler literature quotes: ‘These two members are shaped somewhat like large bowls and have partitions in them arranged like the spokes of a wheel.  The bowl that forms part of the outer casing is filled with light or thin oil and then rapidly revolved; the oil is flung outwards with considerable force but is restrained by the casing and is thrown along the passages formed by the partitions.  The oil strikes against a corresponding passage opening in the inner member, which is attached to the gearbox.  The force of the oil is sufficiently great to rotate the inner member.  Thus the gearbox shaft is revolved and the car moves forwards.  If the engine is revolving slowly the fluid is not thrown with sufficient force to have any effect, but as the force increases with the revolutions it eventually becomes sufficiently great to move the car.

Daimler explained the pre-selector system in some detail but it is easier to quote a short introduction: ‘In this box the running gear consists of simple epicyclic trains, interconnected in such a way that various ratios can be obtained as required by compounding various trains.  In order to obtain second gear, another epicyclic train is added to the first train.  Other gears are obtained by the addition of further epicyclic trains.’

The lever can be moved in readiness to the next required gear but will not engage until the pedal is depressed; the gear selected remains engaged no matter where the hand lever is placed.  Thus at the same time another gear may be pre-selected, to be held in readiness until required. 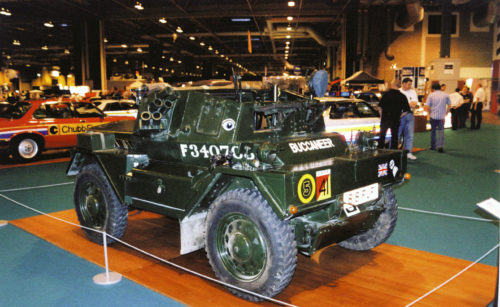 The combination of fluid flywheel and pre-selector in the Daimler Scout Car made this extremely maneuverable.  The transfer gearbox allowed for five speeds in both forward and reverse gears.

Daimler used the combination of the fluid flywheel and Wilson pre-selector gearbox from 1930 to the mid 1950s in both Daimler and Lanchester vehicles.  It was eventually replaced by Borg Warner automatic gearboxes which were a less complicated, much cheaper option to produce.  It was also used in the WWII  Scout Car and Armoured Car.

The fluid flywheel and pre-selector gearbox continued in use on Daimler buses and coaches until the 1960s.  It was the ideal combination for transmitting power smoothly in heavy vehicles, particularly for buses working in towns and cities which stopped and started frequently.