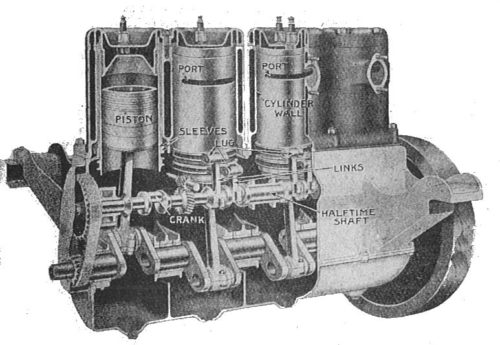 An American engineer named Charles Yale Knight had developed a sleeve-valve engine in 1904 and built a small number of cars in the US.

Born in Indiana in 1868, Knight was originally a printer and newspaper publisher and he bought an early Knox automobile, a three-wheeler with an air-cooled, single-cylinder engine for work.  The noisy valves annoyed him and he believed that he could design a better engine.  Knight was familiar with the slide valves used on early Otto engines, having repaired the similar valve mechanism in his father’s sawmill.  The slide valve had, however, been replaced in gasoline engines by the poppet valve, whose characteristics were better suited to four-stroke engines.

Knight received financial backing from Chicago entrepreneur L.B. Kilbourne, and an experimental engine was built in 1903.  Research and development continued and a full working prototype was tested in 1905.  At first Knight tried making the entire engine cylinder reciprocate to open and close the exhaust and inlet ports; he patented an engine with this arrangement.  He evolved his design in favour of a double sliding sleeve principle which had two cast-iron sleeves per cylinder, sliding inside the other, with the piston inside the inner sleeve.  The sleeves are operated by small connecting rods actuated by an eccentric shaft and have ports cut out at their upper ends.  The cylinder head is like a fixed, inverted piston with its own set of rings projecting down inside the inner sleeve and is individually detachable for each cylinder.  The design is remarkably quiet and the sleeve valves need little attention, no adjustment, no shims to wear out and no springs to break.

Together Knight and Kilbourne showed a complete Silent Knight touring car at the 1906 Chicago Auto Show, fitted with a 4-cylinder, 40 hp (30 kW) engine, priced at $3,500.

Daimler were attracted by the concept and Knight brought one of his cars to Coventry for Daimler to evaluate.  They signed an agreement in April 1908 to manufacture the Knight engine under a licence that covered ‘England and the Colonies’.  Though it was a running prototype the Knight engine needed some development and Daimler turned it over to Dr Frederick Lanchester who was working as a consultant for them.  Lanchester was one of the most original engineers of the day and by September 1908 the new engine was ready to be demonstrated to the Press.  The outcome of this work was an engine with a single sliding valve which was much less complicated to build and installed in Daimlers as the ‘Silent Knight’ engine.

The ‘Motoring Illustrated’ magazine commented, ‘The new engine has shown itself to be, in every respect, far and away superior to tappet valve type of engine hitherto made as standard, so that the company have no hesitation in nailing this particular flag to their mast, having thoroughly satisfied themselves as to its superiority for their purpose over any other type.  We were afforded the opportunity of seeing one of these motors running upon the test bench, and we can certainly testify to its wonderful quietness and smooth-running qualities; moreover, it seemed to possess the power of rapid acceleration under load in an extraordinary degree.’

Daimler was so pleased with the new engine that they dropped poppet valve engines in favour of the sleeve-valve unit.  They introduced a range of three four-cylinder engines – 3,764 cc, 6,280 cc and 9,236 cc – with a promise that if any owner was unhappy with the sleeve-valve engine within two years of buying a new Daimler, they would replace it with one ‘of the company’s late mushroom-valve types’.

By the end of October 1908 Daimler had built around 600 engines and installed them in 60 complete cars ready for sale.  Known as the Silent Knight it was launched at the end of October, though Lord Montagu had already acquired a 38 hp example from the factory.  He drove it to Le Mans in France, where he witnessed the flights by Wilbur Wright, and later wrote glowingly about the car – and the flights – for ‘The Car Illustrated’.  He noted that the, ‘…silence and smoothness of running were very remarkable for a four-cylinder engine…and the consumption of petrol, considering the power developed, was not excessive.’

The new Prince of Wales (later King George V) took delivery of a 38 hp sleeve-valve Daimler in October 1909 and ordered a 57 hp example for delivery the following year.

Following rigorous testing by the RAC in 1909, involving 132 hours bench testing and 2,000 miles on the Brooklands track, Daimler were awarded the coveted Dewar Trophy for ‘Outstanding British Technical Achievement in the Automotive Industry’.

The main advantages of the sleeve valve engine are as follows:

A number of disadvantages plagued the single sleeve valve:

From their early days the Company had manufactured commercial vehicles, especially trucks and buses.  In 1910 they produced a dozen Knight-Pieper-Lanchester (KPL) petrol-electric (hybrid in today’s parlance) buses to designs by Frederick Lanchester.  They had four-wheel brakes, unitary body/chassis construction and a separate sleeve-valve engine for each rear wheel.  Unfortunately, they were not a commercial success and the project did not progress further, though Lanchester did keep up his work on a hybrid engine.