As early as August 1918 Percy Martin and Frederick Lanchester were discussing plans for post-war car production.

The first post-war motor show was held in November 1919 and the Daimler Motor Company presented two new cars – a 30 hp and a special 45 hp model.  The ‘Light Thirty’ was aimed at the new market of owner-drivers which grew rapidly after the war.

Car production did not get underway until 1920 and Daimler changed their way of doing business and instead of selling direct to their customers they decided it was time to build a network of dealers and service agents.

Ernest Instone, who had joined Daimler in 1896 and held various positions in the company, resigned in 1921 to enter into a business partnership with Daimler’s London Manager, Undecimus Stratton who together with Joseph Mackle had joined Daimler as a pupil in 1908.  Between them they formed Stratton-Instone Ltd, to handle Daimler, BSA and (later) Lanchester cars in the London area.

Also in 1921 Daimler started shipping Light Thirty chassis to Japan for the Japan Automobile Company of Tokyo to fit their own open and closed bodies, for sale in their home market.

After the deaths of Stratton and Instone, the firm of Stratstone was formed by Mackle in 1932.  The company has gone through several changes of ownership since then but is still in existence as a main Jaguar Land Rover dealer.  Stratstone held the Royal Warrant to supply Daimler motor cars to the Royal Family.

Daimler’s pre-war foray into car hire was on an almost ‘ad-hoc’ basis and not properly organised, this was put right with the formation of Daimler Hire Ltd, which had 250 chauffeur-driven cars based in London.  Many households in London has Daimlers, complete with chauffeurs, on hire on a retainer basis so they could call them in whenever needed.  This fleet came into its own during the rail strike of September 1919  when it ran shuttle services between London and Birmingham and London and Manchester to replace the missing train services. 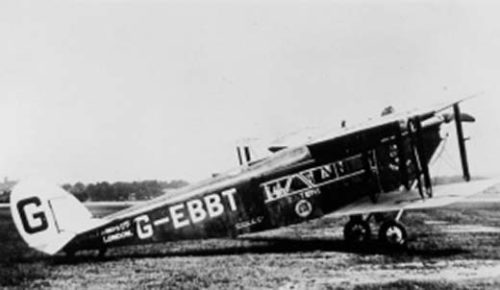 Daimler Hire Ltd extended its luxury travel services to include charter aircraft through a new enterprise, Daimler Air Hire.  Following the take-over of Airco and its subsidiaries in February 1920 services included scheduled services from London to Paris as well as “Taxi Planes” to “anywhere in Europe”.  In 1922 under the name of Daimler Airways services were extended to include scheduled flights from London to Berlin.  In 1923 a government committee recommended that Daimler Airways and three other companies should merge to form a new national carrier – Imperial Airways which started operations on 1 April 1924 from Croydon Airport, south of London.

In 1930 a majority shareholding in Daimler Hire was sold to Thomas Tilling Limited, who bought the remaining shares in 1949.  In the 1950s, Humber limousines were added to its fleet and in 1958, the company was sold to Hertz, as a base for the American hire company to enter the British market.  Daimler Hire was discontinued in 1976. 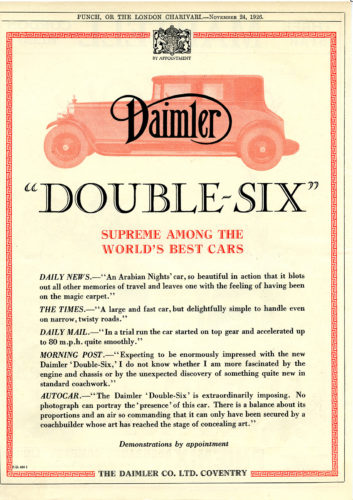 In October 1922 Daimler worked with the Marconi Company and fitted Marconi eight-valve receivers to two of the Light Thirty cars.   The experiment resulted in ‘perfect reception’ and in November 1922 Daimler became the first company to produce cars with a factory fitted radio and exhibited them at the Motor Show at Olympia.   By January 1923 Daimler had fitted the ignition system with a suppressor to stop sparks interfering with radio reception.   Wireless equipped cars were added to the Daimler Hire fleet.

In 1924 four-wheel brakes became standard on Daimler cars and the new 57 hp model was announced.  HM King George V replaced the ageing 1910 Royal Daimlers with four of the new 57 hp models.  Commercial vehicles were not neglected and in 1926 AEC was reorganised with Daimler to form the Associated Daimler Company (ADC) but within three years they were separated once again.

Also in 1926 Daimler produced one of their most advanced engines, the 7,136 cc sleeve-valve V12, each bank of six cylinders had its own carburettor and ignition equipment.  Known as the ‘Double-Six’ it was built in various forms until 1934.

When the King ordered a new Daimler Double-Six in July 1934 Daimler had to put in a special request to build it in accordance with ‘their latest practice to incorporate the silent overhead valve system’ – carefully avoiding the mention of poppet valves.  The car was delivered in April 1935 in time for the King’s Silver Jubilee.   Another one but with a Hooper limousine body was delivered for Queen Mary on 1 January 1936 and continued in service until after the war.

The Double-Six name was reintroduced when Jaguar produced its V12 engine in 1970.

A change at the top came in 1929 when Laurence Pomeroy, who had been Chief Engineer, was appointed Managing Director of Daimler.  Pomeroy introduced the fluid flywheel transmission system in 1930 and Daimler’s famous pre-selector gearbox became standard across the range.

Walter Wilson had designed this system and tested it on his own Vauxhall 14/40; he showed the innovative gearbox to Vauxhall in 1926 and they bought the patent rights.  However, General Motors bought Vauxhall soon afterwards and shelved the Wilson design, as they wanted to promote their own ‘synchromesh easy-change system.’  Wilson got John Siddeley (Lord Kenilworth) to help get his patents back.  Siddeley was an astute businessman and could see the value of Wilson’s invention for his own cars and, after an out of court settlement with General Motors, they were restored to Wilson.  In December 1926 a new company, Improved Gears was set up with Siddeley and Wilson as joint managing directors.  Improved Gears granted licenses to Daimler, Riley and Talbot Lago to manufacture ‘pre-selector’ or epicyclic gearboxes.

Daimler adopted and adapted the design and introduced them in 1930.

Lanchester had built the first petrol-driven, four-wheel car in Britain in 1896 and, by the early 1900s, was a serious contender in the luxury car market with Rolls-Royce and Daimler.  They supplied cars to Royalty and the rich and famous both at home and abroad and, like Daimler, had been heavily involved with supplying products to the War Office during World War One.  Lanchester modified a car chassis and produced an armoured car in record time for use by the Army, later they made the first armoured car to be specifically designed as a fighting vehicle as opposed to an adaptation of a standard road chassis.

However, by 1930 their fortunes had taken a turn for the worst because of the Great Depression and on 28 December Hamilton Barnsley, Lanchester Managing Director, signed over the company to BSA, who paid £55,000 for Lanchester shares which included settling their overdraft of £38,000.  Sadly, Barnsley died of a heart attack the next day.

Models that had been designed before the take-over went on sale in 1931 as the last of the pre-BSA Lanchesters; from that time on the models would be based on Daimlers but with a Lanchester radiator grille and badging.  The name Lanchester disappeared in 1956 when the marque was discontinued.

For the ‘owner-driver’ Daimler introduced a straight-eight engine in 1934; they were smooth-running units that were much admired and raised the profile of the company.  The large car market was not neglected with three sizes of six-cylinder cars and Special Service Double-Sixes for VIP purposes.  Lanchester products were contained in the medium-size range and still had a loyal following.  One of whom was HRH The Duke of York (later King George VI) who had owned several Lanchesters in the past and insisted his Daimlers were fitted with the Lanchester-style radiator grille.

Determined to access the market for smaller cars Daimler used the Lanchester brand to launch smaller models in 1932 and 1933 starting with a 1,203 cc four-cylinder 10 hp dubbed the ‘Minimum Lanchester’.   This incorporated the fluid flywheel and the self-changing gearboxes but used poppet valve, rather than sleeve valve engines.  In 1933 Daimler launched a six-cylinder 15 hp car, effectively a de luxe Lanchester Ten – the first poppet valve engined Daimler since 1909.

In May 1933, Sir Edward Manville, who had been Chairman of Daimler since 1905, died, and was succeeded by Sir Alexander Roger who only stayed in post for eight months.  In 1934 Percy Martin retired as managing director of the BSA Parent Company having turned the BSA Group round from a loss of £688,000 in 1932 to a profit of £245,000 in 1933, and he replaced Sir Alexander as Chairman of Daimler. 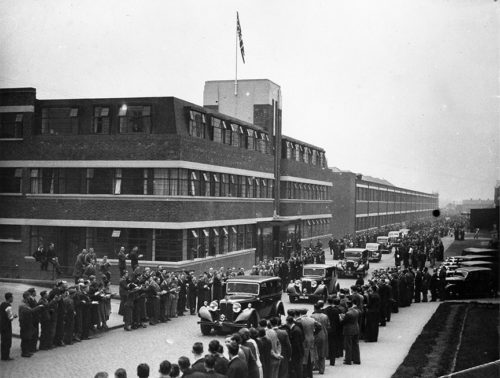 Daimler continued with the larger cars introducing a Light Straight-Eight which went into production in January 1936 – with a top speed of 90 mph – the fastest Daimler  sold to the public.  After the death of George V, Edward VIII changed allegiance to Hillman and Humber cars, but his abdication and the ascent of George VI brought Daimlers and Lanchesters back to the royal household.  At  George VI’s Coronation on 12 May 1937 a fleet of 150 Daimlers were chartered for use by foreign dignitaries, and it is estimated that over 1,000 privately owned Daimlers were used in connection with the Coronation.

The Radford factory was extended in 1938 doubling its capacity and in March  1939 Daimler opened a works museum containing a number of early Daimlers and the prototype Lanchester from 1895-96.  They were the first British car company to open a museum.  At the same time as the museum, the company opened a new sports and social club on the site of its WWI airfield.

In 1936, faced with a real possibility of war the British Government pledged a large sum of money into building ‘shadow’ factories to produce armaments.  With the dedicated military suppliers already busy, it was natural that the government turned to the motor industry which had the expertise of volume production and a quick turn around.  The new factories were built quickly to supplement the established concerns already producing military matériels and ‘shadowed’ the main manufacturers.  An area that had to be addressed was the need for aircraft engines and by the end of 1937 the various shadow factories were operational and under the control of the Ministry of Aircraft Production.

Daimler had two such shadow plants, Number 1 was on their main Radford factory site in Coventry and the other, Number 2 Shadow Factory, was located on what had been open countryside by the village of Allesley outside Coventry – Browns Lane.

Number 2 shadow factory was built on 6.2 acres (2.51 hectares) of land and work commenced a week after the required official documents had been signed.  The first building to be completed was an assembly shop of around 308,200 sq ft (28,633 sq m), with attached offices, test area and a canteen.  Quite soon afterwards the buildings were expanded and the assembly area was increased to 844,936 sq ft (78,497 sq m) with additional office space and an accommodation section.  Much of the design for the layout of the factory buildings was planned by George Hally, who would later become Managing Director of Daimler in February 1941.