Production of Cars and Commercial Vehicles

The Daimler factory workers were on their annual holiday on 4 August 1914 when England declared war on Germany and World War One started.  Immediately, the War Office sought out all motor manufacturers and commandeered every motor car and commercial vehicle on the premises.  The Company contacted all its depots and within a week had sent over 200 cars to the assembly area at Hyde Park in London.  They were quickly marked ‘W↑D.’ (War Department) and ferried to various depots prior to being taken overseas.  To meet the demand the War Office acquired vehicles off the streets that belonged to commercial concerns; it was not odd to see vans still in their civilian livery, for example the Royal Flying Corps (RFC) went to France with vans from Maples Furniture store, Brooke Bond Tea and Oxo to name a few.  They were not given army olive drab or khaki for some months.  Due to the shortage of suitable transport, London omnibuses (many were Daimler or AEC) were pressed into army service by the War Office to take troops to France.  London taxis were also used in this task.

The need for vehicles was serious and very quickly in 1914 contracts were awarded to the motor industry including an order for special 20 hp chassis, of which Daimler produced 60 by the end of August.

The Daimler workforce was supplemented by a number of Belgian refugees who came to Coventry and worked at the Daimler throughout the war years, enjoying all the rights and privilege’s of their British counterparts.

Tractors were manufactured in conjunction with Foster’s of Lincoln, were fitted with 105 hp Daimler engines and adapted for road use to pull large guns and ammunition to the front line.

The Prince of Wales (the future King Edward VIII) had joined the Grenadier Guards in June 1914 and although he did not see active service he visited the front as often as he could.  On one visit he is reported to have said ‘It seems to me that the Daimler people are running this war.’

Wartime use proved that sleeve-valve engines could run reliably for years without the need to de-carbonise (de-coke) that was the norm with ordinary poppet valve engines.   Daimler also built a number of specialist vehicles: mobile workshops so vehicles could be maintained in the field; special vans for the Marconi Wireless Telegraph Company for radio communications.  In all Daimler produced over 4,000 lorries for the war effort.

Production of Aero Engines and Aeroplanes

The Radford factory manufactured large calibre shells and aircraft engines.  The first was the French Gnome rotary engine; Daimler had no drawings but were sent an example to copy.  The engineers made a full set of drawings within a week and within eight weeks a prototype engine was running.  The manufacture of large cylindrical components for the sleeve-valve engine meant that Daimler’s skills were particularly suited to the manufacture of parts for rotary aero engines.

With skills in making car bodies it was a logical step to progress from making aero engines to making complete aeroplanes and Daimler went on to build the following ‘planes under licence: Bristol BE 2c (building 100 by the end of 1914); BE 12; RE8 (300 built) and De Havilland DH10 (building 80 per month by the end of 1918).  The fields next to Daimler’s Radford factory were bought by the Company and turned into an  aerodrome for the duration.

A sole surviving Daimler-built RE8 may be seen at the Imperial War Museum, Duxford.  The aircraft was restored between 2000 and 2005 and the Daimler stencils on the wing struts, which had long been covered by paint over the years since 1918, were uncovered and preserved in situ.

Daimler also built a number of the War Office’s 150 bhp RAF 4 V12 engines providing them with valuable experience which they would put to good use later when they developed their own ‘Double-Six’ V12 engine in the 1920s.

Daimler’s manufacturing expertise was recognised when the Ministry of Munitions appointed Percy Martin as ‘Controller of Petrol Engines’ and was given a seat on the Air Board.  On 5 April 1918 Daimler was contracted to build 1,000 of the new, 220 bhp, BR2 engines (Bentley Rotary – designed by W. O. Bentley) and by the end of December 1918 they had built 1,245 of them.

Daimler’s contribution to World War One was considerable, not only for the quantity of war materiel produced (2,000 12 inch shells per week) but also for their part in introducing many advances to mechanical warfare; one that would place Britain on a better footing for the future. 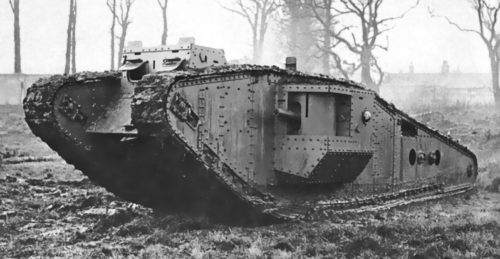 Following Daimler’s work on the Foster Tractors, the Landships Committee formed by Winston Churchill investigated the production of new ‘engines of war’ that could cross trenches and broken ground.  This lead to the design and construction of an armoured vehicle with caterpillar tracks, powered by a Daimler sleeve-valve engine, that was nicknamed ‘Little Willie’.  The following version ‘ Big Willie’ passed its tests in January 1916 and the British Army ordered one hundred ‘Mark I Tanks’ in February 1916 and fifty ‘Mark II Tanks’ in April.

Tanks were first deployed in the autumn of 1916 against Prince Rupprecht of Bavaria’s divisions on the Somme.   This first action by ‘His Majesty’s Land Ships’ broke through two of the enemy’s lines and advanced further in one day than since the start of the Somme offensive in July.

After the Armistice one of the Daimler powered tanks was driven into the centre of Coventry as a war memorial.  When it was moved 19 years later to be replaced by the statue of Lady Godiva the engine was still able to run.