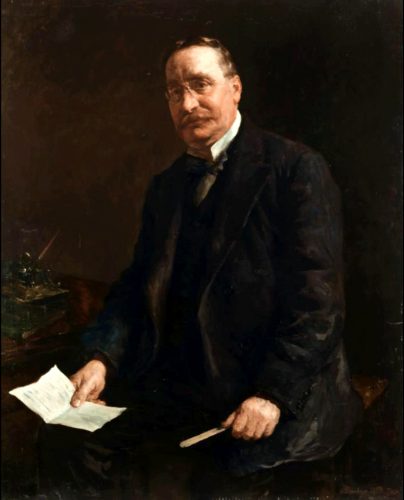 Frank Dudley Docker, born on 26 August 1862 in Staffordshire, was an English businessman and financier as well as a first-class cricket player for Derbyshire in 1881 and 1882.

Dudley Docker was the son of solicitor, Ralph Docker and his second wife, Sarah Maria.  He left his education at King Edward’s School, Birmingham, and joined his father’s firm to study law, only to leave in 1881 to join his brother William in the varnish business.

Following their father’s death in 1887, more capital was injected into the firm which grew into supplying paint as well as varnish, winning orders from the growing railway and rolling stock sector. 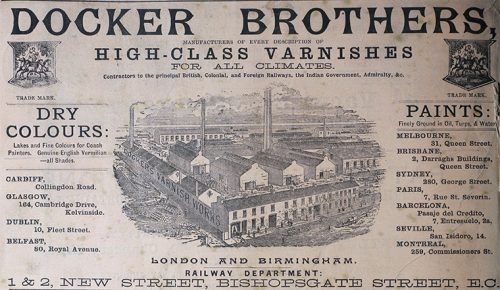 Dudley Docker married Lucy Constance, daughter of distinguished Birmingham legal figure John Benbow Hebbert, and moved close to the factory into a house in Rotton Park Street, Birmingham.  In 1896 they had a son, Bernard Docker, and moved to The Gables, Kenilworth, where they stayed for the next forty years.

In 1923 they acquired a London home, a flat in Berkeley Square, Mayfair. Then in 1935 they moved their main home from Birmingham to Coleshill House in Buckinghamshire.

Docker was a man of influence who knew everyone that mattered in industry and believed  bigger, more concentrated, industry was better.  In 1906 he became a director of the Birmingham Small Arms (BSA) Company and two years later, a director of weighing equipment manufacturer, W & T Avery Ltd.  In 1907 MCWF bought Docker Brothers considerably enriching both Dudley and Ludford.

He believed the more that was produced, the more would be consumed.   Walter Rathenau, German industrialist observed in 1909 that ‘three hundred men, all acquainted with each other, control the economic destiny of the [European] Continent’ and Docker was one of the three hundred men who were British.  He was active on the fringes of political life, his main concern being protectionism for British industry.  He supported the bid of the Unionist candidate, Arthur Steel-Maitland with the loan of a couple of Daimler cars, although he declined the offer to join the Executive Committee of the Conservative Association in 1906, but becoming vice-president in 1916.

He was a keen advocate of using the press to further his own manufacturing interests, contributing articles to the Daily Mail and Midlands newspapers and looked at investing in the Birmingham Gazette.  The Daily Express was struggling during 1911 and 1912 and Steel-Maitland suggested Docker should become proprietor but he resisted.  In May 1914, with Steel-Maitland’ backing he bought the oldest evening newspaper in the world, the London Globe for £5,000  (it having been sold for £40,000 in 1912).  Editorials (no doubt with Docker’s backing) were consistently hostile to the Liberal government and there is no doubt that Docker maintained close supervision of content.

Takeover of the Daimler Company

In 1906 BSA bought the Royal Small Arms Factory at Sparkbrook in Birmingham from the government, in return for a contract guaranteeing a certain amount of orders for the years 1906 to 1909.  The government did not deliver on their contracts leaving the factory with huge amounts of excess capacity.  To try and absorb this capacity BSA started to develop cars,  but lack of planning, bad management, constant design changes and no attempts to use standard parts meant they only launched three small cars with very limited success.   In 1908 Docker started looking round for a more experienced partner in the car industry to buy in the needed management skills.  The Daimler Company had been struggling through the first years of the 20th century, despite being one of the founders of the British motor inudstry and enjoying Royal patronage.  Changes to vehicle taxation had pushed them towards building smaller, less profitable cars.  Docker decided to try and repeat his success in merging the rolling stock companies to form MCWF and apply this to the fledgling motor industry.  Docker was well acquainted with Daimler having owned a Daimler car since 1906 and as he knew almost everyone in Midlands manufacturing industry he was already close to the Daimler management team of Percy Martin, Edward Manville and George Flett.

On 1 September 1910 it was announced that Daimler and BSA were discussing amalgamation.  The final agreement was signed on 22 September and as per Docker’s grand plan this was actually a takeover rather than an amalgamation.  Daimler ceased to be an independent company, despite having recorded a profit of £100,000 during its last year.  BSA assumed responsibility for all Daimler liabilities but order books for both companies were well filled and the future prospects looked good.  Docker joined the Daimler board with Edward Manville as Chairman, and Percy Martin as Managing Director.  He only stayed on the Daimler board for about two years, remaining a director of BSA.

BSA paid over £600,000 for the Daimler Company and issued five £1 BSA Ordinary shares in exchange for every four of the 200,000 Daimler Ordinary shares.  The financial press welcomed the deal:

The deal wasn’t as good for Daimler as everyone at first thought.  Daimler had to pay BSA a dividend of £100,000 a year which left Daimler with no spare cash to develop either its car or commercial vehicles business.  Docker insisted the dividend be paid even if Daimler had to extend their overdraft at the Midland Bank.  By 1913 it was necessary for Daimler to make a capital issue of £300,000 to resolve the company’s liquidity problems.

This was evidence that Docker had now made the transition from making money by growing his manufacturing empire and making and selling things, to making money purely from his merger deals.

Docker’s approach to the treatment of the many thousands of people who worked in his growing empire was ambivalent.  He was understandably anti-strike, having no sympathy for the strikers and used very tough tactics to break strikes, including moving business from company to company to make sure he delivered on his contracts.  On the other hand he was interested in medical charities and free nursing was provided for the families of workers and he funded scholarships for the children of MCWF workers at Birmingham University where he was a Life Governor.  Being a capitalist at heart he was keen on workers being shareholders and in 1913 he offered the MCWF workers a shareholding scheme, which was initially rejected but a renewed offer was accepted in 1916.  A similar scheme was offered to Daimler employees in 1916 where the company lent money to the employees at a low interest rate to make the repayments.  By 1918 the participants had saved £500,000 in the scheme.

Over the years Dudley Docker’s interests continued to broaden.  He was involved in setting up the Territorial Army in 1907 including setting up rifle clubs at a number of his factories.  He became a justice of the peace (JP) in 1909.  In the King George V’s Coronation Honours of June 1911  he was created a Companion of the Bath for his support of the Territorial movement.  Over the years he put so much financial business through the Midland Bank that in 1912 he was elected as a director.  His interest in rail moved from rolling stock to railways becoming a director of Stratford-upon-Avon and Midland Junction Railway and from 1915 to 1933 he was a director of the Metropolitan Railway, as well as the London, Brighton and South Coast Railway from 1918 to 1922 and the Southern Railway until 1938.

Dudley Docker donated £10,000 to Sir Ernest Henry Shackleton’s 1914-1918 Imperial Trans-Antarctic Expedition and Shackleton named one of the lifeboats aboard after him. The Dudley Docker contributed towards the survival of the castaways after the expedition vessel sank.

Docker’s companies were heavily involved in both the run-up to, and the outbreak of the Great War. The Globe was xenophobic in its reporting and campaigning and was the wildest of all the London newspapers spreading spy-scares.  The editor, Charles Palmer, under Docker’s guidance  campaigned to remove Prince Louis of Battenberg (German Royal Family) from his post as First Lord of the Admiralty.  Docker saw the War, not as a battle with the German military but as a battle for supremacy over the German Finance and Manufacturing industries.  Docker pushed Steel-Maitland into supporting the 1914 Act with prohibited trading with the enemy, although he wanted this Act to cover existing contracts and not just new ones.

In April 1914 he called a meeting of manufacturers and trade unionists at the Midland Hotel in Birmingham to discuss organising the munitions industry for the benefit of the country and emerged as chairman of the Executive Committee of the new ‘Birmingham Munitions Output Organisation.’  Government mis-management of production of shells led to the Organisation pushing for the establishment of a Ministry of Munitions which was setup on 22 May.

MCWF, BSA and the Daimler companies all made major contributions to the war effort from 1914 to 1918 including production of munitions, trucks and tanks.  The first ‘land ships’ or tanks were made by a Lincolnshire firm of agricultural machinery makers but in 1916 with the launch of ‘Big Willie’, responsibility moved to MCWF with many of them being powered by Daimler’s sleeve-valve engine.

Docker groomed his son Bernard to succeed him in many of his business interests making sure he worked his way through MCWF including putting him in charge of tank manufacturing (for which he was later knighted – Sir Bernard) and putting him on the board in 1918 aged only 22.  In 1929, the Company merged with the railway rolling stock business of Cammell Laird and the Company became Metropolitan-Cammell Carriage and Wagon Company Ltd, being part owned by Vickers and the Cammell Laird group.

Dudley Docker continued to manage his son’s rise over the next two decades, treating the BSA group like a small family concern.  In 1940, Sir Alexander Roger, chairman of the BSA parent, was seconded to the Tank Board.  Sir Bernard took over as chairman whilst also serving as managing director in place of Geoffrey Burton, who had been seconded to the Ministry of Supply.  Burton was never allowed to resume his position having been told in no uncertain terms by the ailing Dudley Docker that he would have to go to allow Sir Bernard to be made Managing Director of the entire group.

In June of 1944 Dudley Docker contracted tonsilitis which, allied to a long standing heart condition, lead to Ludwigs angina and his health declined.  he died on 8 July 1944 in his Coleshill House, at the age of 82, leaving Sir Bernard at the helm of his business empire. 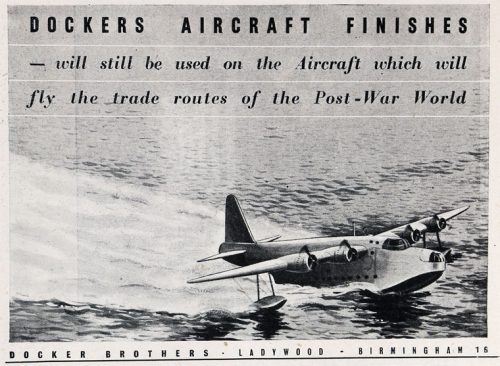 The Docker Brothers paint company outlived Dudley Docker and carried on serving the country through WWII, despite the Docker’s paint factory on Rotton Park Street in Birmingham being bombed twice in July 1942.