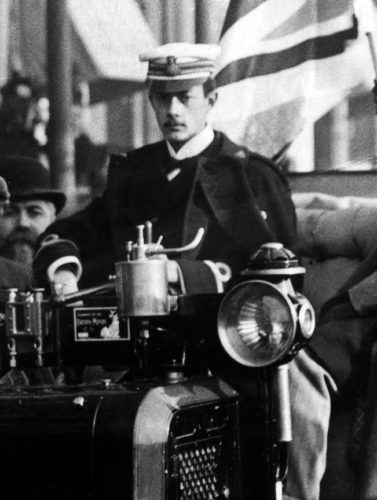 Henry Lawson in his Daimler Panhard on the 1896 Emancipation Run

Lawson has been described as many things: speculator; profiteer; rogue; fraudster; as well as a businessman – often looking backwards by today’s standards rather than being judged by the standards of the time.  He was highly successful, making large profits for himself and his investors, in much the ways of many other Victorian businessmen.  The contents of his prospectuses would not pass modern Advertising Standards, and many of his dealings with close friends would now be regarded as insider trading.

He was also a visionary and even at this very stage in the development of the motor industry could see a brand new future coming.  He viewed this in much the same way that the railways had changed Victorian Britain and saw it as an industry that he wished to control. 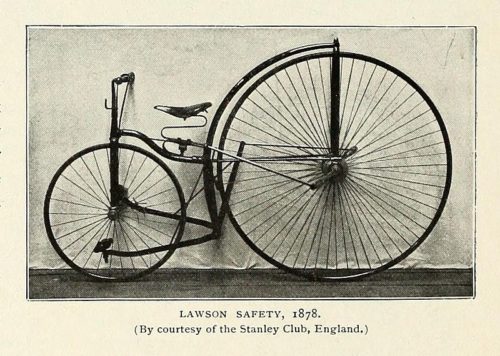 Lawson was born on 23 February 1852 in the City of London, the son of Thomas Lawson, a Calvinistic Methodist preacher and technical model maker and his wife Anne Lucy Kent.  In 1867 he started a two-year apprenticeship at W. Melville’s Iron Factors at Islington and then his father’s trade as a model maker.  The family moved to Brighton in 1873 where he started working in a bicycle business owned by James Likeman.  In 1876  Lawson and Likeman together  filed a patent for ‘improvements in the construction of bicycles’ and in 1878 Lawson patented a lever-driven bicycle of his own design. 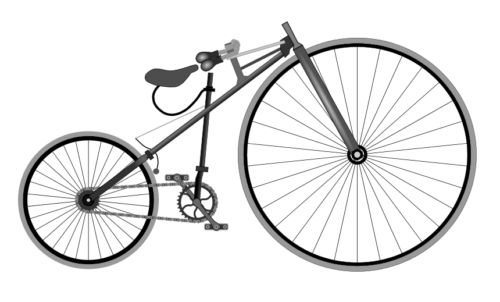 He moved to Coventry which then was the centre of the bicycle industry and in 1879 patented a chain-driven Safety Cycle which he called ‘Bicyclette’ to attract the French market.  In 1880 he joined the new Rudge Cycle Company founded by Dan Rudge which built his Bicyclette.

His first major business deal came in 1887 when he helped turn Rudge into a joint stock company.  A number of company flotations followed in 1889 and 1890 which subsequently went into liquidation establishing a pattern of company formations, dividends being paid and then being liquidated, often without actually producing anything.

Lawson teamed up with Terah Hooley, a master of company flotations, and together they formed the British Motor Syndicate in July 1895 with a capital of £150,000 to fulfil his aim of gaining control.  Hooley along with Lawson and others acquired the Dunlop Pneumatic Tyre Company for £3 million and floated it for £5 million, Lawson making £500,000 for himself in the process.  After the flotation of one company, Venice Limited, the financial weekly ‘The Rialto’ wondered if Lawson .. ‘may be satisfied to rest on his laurels….but if rumour be correct he is maturing several schemes in connection with horseless carriages.’

The British Motor Syndicate started buying up patents in an attempt to gain control of the nascent British motor industry and acquiring the Daimler Motor Syndicate was the first step in the plan.  On 15 October 1895 Lawson’s syndicate offered Frederick Simms £35,000 to acquire the Daimler patent rights  which Simms had bought from Gottlieb Daimler in Germany.  Simms sold out, repaying all his initial investors and returning them 200% of their original investment – an excellent rate of return in less than three years.

The new Daimler Motor Co. Ltd. (DMC) was registered by Lawson on 14 January 1896 with Simms remaining as a consultant.  Gottlieb Daimler was appointed to the board for two years, but there is no record of him attending any meetings.  The Hon. Evelyn Ellis (who had been involved with Simms from the beginning) was listed as a director in the prospectus.  Lawson wasn’t listed, possibly to keep his name out of the press due to some bad publicity from some of his previous financial dealings, although he was subsequently nominated to the board and became the Company’s first chairman.

The Rialto commented: ‘We cannot protect people from the consequences of their own impudence and carelessness… The maxim of Caveat Emptor appears to have been ignored by the clients of Mr Lawson, and no legislation can protect fools.’

Lawson also setup the Motor Car Club to promote the use of cars, with himself as chairman, of course.

One of the first undertakings by the directors of the new Daimler Motor Company was to visit the Continent to study French (Peugeot, Panhard et Levassor and de Dion Bouton) and German (Daimler and Benz) motor production.  What emerged as paramount was the need for a factory; locations in Birmingham and Cheltenham were considered but deemed unsuitable.

In early 1896, Simms was appointed a director of Stuttgart’s Daimler Motoren Gesellschaft (DMG) which later became Daimler-Benz.  He remained consulting engineer to Lawson’s company but, perhaps wisely, did not join its board of directors.

At the March 1896 board meeting Lawson recommended the purchase of a factory in Coventry by the Canal, a former cotton mill from the now defunct Coventry Cotton Spinning & Weaving Company.  This was empty and had been rebuilt by insurers following a fire in 1891.  It also happened to be owned by Hooley.  The board agreed the purchase for £18,000, with Hooley receiving a cheque for £4,000 that day.  Daimler’s ‘Motor Mills’ was born. 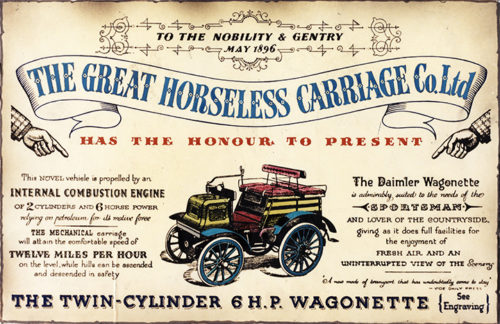 Lawson and the DMC went on a patent buying spree in a bid to seize control of the industry, buying up patents from De Dion-Bouton and Léon Bollée in France and Pennington in the US and agreeing deals with Panhard & Levassor and Peugeot Frères in France.  By mid 1896 they had acquired over 70 patents and Lawson formed The Great Horseless Carriage Co Ltd in May 1896 leasing space in the Motor Mills, paying rent from one of his companies to another.

Despite not having delivered a single vehicle, the Company paid an interim dividend of 40% to its investors.

On 14 November 1896, Lawson ran his Cannstatt-Daimler landau as the lead car on The Motor Car Club’s Emancipation Day procession from London to Brighton, which he co-organised.  Simms and Gottlieb Daimler used Simms’ 1895  Cannstatt-Daimler for the run.  This celebrated the lifting of the speed limit under the Locomotive Act which had required vehicles to travel no faster than 4 mph (6.4 km/h).

In 1935 the Mayor of Brighton, who had been a journalist in 1896, recalled that Lawson had handed out a printed report of his participation in the run – two days before it happened.

Lawson sought to enforce his patents rigidly and when the Hon. Charles S Rolls imported a Peugeot from France he was taken to court, an injunction was granted and he was fined £15 damages in January 1897.  Rolls was then allowed to pay a ‘royalty’ and continue to use his Peugeot.

Before the purchase of the Daimler ‘Motor Mills’ in Coventry, Simms had recommended the purchase of a factory in Cheltenham which he thought was better suited to the Company’s needs.  He now felt that the new company was not what he had wished for and resigned in 1897.

On 7 October 1897 Lawson himself, resigned from the Daimler Board saying that the Great Horseless Carriage Company and the British Motor Syndicate were taking up too much of his time.  The Coventry cycle industry collapsed in 1898 and Hooley went bankrupt -not before putting £200,000 in his wife’s name.

In January 1898 the Great Horseless Carriage Company also went into liquidation but was re-formed as The Motor Manufacturing Company (MMC).  The Daimler Motor Company worked with MMC, Daimler building the engines and frames and MMC producing the carriage-work.

In 1900 Lawson (now styling himself Sir Harry) was in the US pushing his bicycle interests  including  the ‘Lawson Sociable’ a two seater motorised tricycle. – marketed in the US as the ‘Trimoto’.  He looked into introducing this to Britain but it never went past the prototype stage.  He also tried to setup the ‘Daimler Waggon Company’ in Britain in 1901 but was taken to court by the Daimler Company.

Many of Lawson’s patents were not as secure as he had hoped, and from 1901 a series of legal cases saw the value in his holdings eroded through a series of successful lawsuits by Automobile Mutual Protective Association.  By 1903 Lawson’s empire was starting to unravel company by company.  Lawson floated the ‘Electric Tramways Construction & Maintenance Company’ in 1904 and he and Hooley stood trial for fraud, representing himself.  Hooley was found not guilty but Lawson was found guilty of making false statements and was sentenced to twelve months hard labour which he commenced in March 1905 at Wormwood Scrubs prison in Hammersmith, London, after a delay of some months because of a claimed illness.  He was released on 16 December 1905 after serving nine months, having spent most of the time in the infirmary and written a book on his experiences.

In late 1905 MMC went into receivership and Daimler took over the whole of the Motor Mills allowing their floor space and manpower to be increased.  An attempt by Lawson to reform MMC in 1907 failed and his grand plan to control the British motor industry had come to an end.

Lawson was completely out of the automobile industry by 1908 and disappeared from the public gaze for some years.  He reappeared as a director of Blériot Manufacturing Aircraft Company Ltd., the English branch of Louis Blériot’s aircraft company.  Lawson secretly acquired control of the company just before a public subscription to help expand its war effort.  But the company soon found itself in breach of its contract with Blériot and when this came to light, the company was wound up and Lawson found guilty of fraud and dishonesty and fined.

On 24 March 1916 Lawson survived when the cross channel ferry he was on was torpedoed by a German U-boat.  He was badly injured and still undergoing treatment as late as August when shareholders in his General Omnibus Supply Company met at the London Bankruptcy Court.  The Official Receiver noted that Lawson was in hospital and not able to attend but despite the public having invested £40,000 the company never did any business and there was no hope of any dividend.  He found ‘the statement in the prospectus were absolutely misleading, this case calls for the Public Prosecutor’.  The case went to court in July and Lawson was found guilty.

Despite his speculative and fraudulent dealings, Lawson was a visionary and it is worthwhile including in full here the text of a broadsheet article he issued shortly after the Emancipation Day  run to Brighton.

Prosperity is now dawning for many trades.  Engineers will be wanted everywhere.  Dwelling houses are necessary no longer in towns.  Houses need no longer be let as in Brighton, with annual season ticket included, but everywhere builders now building, who include a strong Motor Car in the stable, join it to town.  The price of land twenty miles outside towns may yet become as valuable as in town itself.   All landowners need only to provide good roads, hotel, restaurant and motor accommodation to welcome the arrival of crowds of pleasure seekers … Wherever the horse and inferior animal power is at present, there immense saving and increased efficiency is to be effected.

‘The bus companies and tram companies are already beginning to move in the matter.  The Army no longer needs to waste money on horse-flesh where roads are available.  The Police on machines will be swifter and more economical.  The Parcels delivery will only be served properly by motor.  The Post Office and Parcels Post must become immense users.  The railway mania will be superseded by the steadily growing, saving and money making advantages daily being discovered in the new motor.

‘The wildest excitement will be that of competition.  The Motor Derby is to present a far more wonderful scene that the Derby of quadrupeds ever has.  The owners can themselves race: the weakest and the fairest may urge their own steed in front of the strongest.  Fancy prices may be offered for the fastest possible cars, and the greatest excitement will be produced by higher speeds than the world has ever witnessed….

‘The British Motor Syndicate is the sole owner of the Master Patents and its shares will see very extraordinary and sensational prices’.

The last paragraph aside, this is a very prescient description of the world to come – from 1896 – considering Gottlieb Daimler had only patented his car 10 years earlier and the car industry was only just starting in the UK.