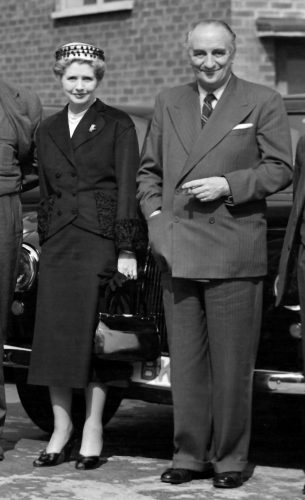 Wife of Sir Bernard Docker and ‘Designer’ of the Docker Daimlers

Norah Docker (née Norah Royce Turner) was born in 1906 in Derby, to Sydney Turner and his wife, Amy.  Her family moved to Birmingham where her father part-owned a car dealership.  At the age of 16 her father committed suicide, leaving her to earn her own living.

As a young woman she became a dance hostess at Café de Paris, a club in London.  She had an affair with one of her male friends, Clement Callingham, the head of Henekeys wine and spirits merchants.  Norah married Callingham in 1937 (age 31),  after his wife divorced him, citing Norah, and they stayed together until he passed away in 1945.  They had a son Lance, and a daughter Felicity who died aged nine months.

In 1946 she remarried, to Sir William Collins, the chairman of Cerebos Salt Co and Fortnum & Mason in London, becoming Lady Collins.  Norah was now aged 40 and Sir William was 70.  Sir William did not enjoy good health, suffering from bouts of confusion and anger, which would probably now be diagnosed as Alzeimer’s.  He spent some months in and out of comas at their home in Wrexham Park where he finally died on 30 November 1947 (age 74) leaving Lady Collins as his sole beneficiary.

Lady Docker had inherited the wealth of her first two husbands and when she married Sir Bernard Docker, she decided that Daimler had to be marketed in a different manner to appeal to a new generation of buyers.  She wanted to make Daimler a household name and had set ideas about how to accomplish that goal.

“If I could find a single reason for my elevation to the dubious rank of a celebrity, then I think I would have a motor car to thank.  I must say, right from the start, that the gold-plated Daimler was not produced with the intention of reflecting any personal glory to me.  Its primary object, and it achieved it magnificently, was to make Daimler a household name and keep it in the minds of the vast car-buying public.  It also spotlighted the high quality of British craftsmanship, for the benefit of foreign markets.  I was ashamed, when I married Bernard, to discover that, both at home and abroad, the superb Daimler car was in danger of becoming a relic.  I told him (Sir Bernard Docker): ‘The only people who know about the Daimler are the royal family!  I know you couldn’t find better customers, Bernard, but Daimler can’t survive on status alone.  It’s got to sell to the masses.  Look what happens when we go abroad with our cars.  Whenever it is admired by the Italians, or French, they call it a ‘Delahaye’.  I’m fed up with repeating: ‘No, Daimler please’.”

Lady Docker at Daimler and Hooper

Sir Bernard appointed Lady Docker to the board of Hooper and her brother and brother-in-law (R.E. Smith) also joined the group.  It is said that she personally designed some of the cars that became known as the ‘Docker Daimlers’ which came out for the Motor Shows from 1951 to 1955.

In practice she contributed ideas to the design staff, working with Hooper’s chief designer Osmond Rivers but the excesses that were perpetrated by Daimler were hers and hers alone.  The gold-plated brightwork and the lizard or zebra skin upholstery that were in evidence on some of these ‘Docker Daimlers’ were the signs of someone with dubious taste.  However, in the dull 1950s these Docker cars were the highlight at any appearance and that was what mattered.  People read about Daimler and saw photographs of the Dockers and their Daimlers.  In many ways they were no different from many footballers, film personalities and celebrities of today. 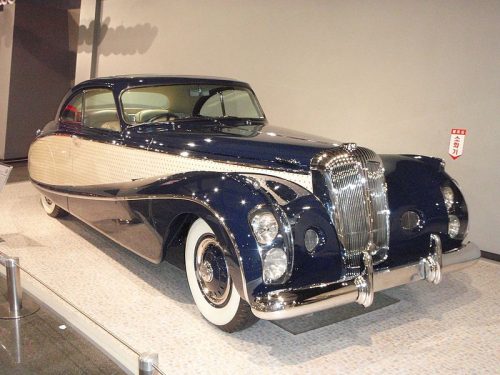 The Docker Daimlers were: 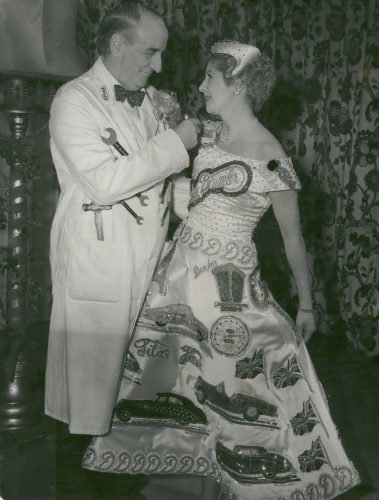 1 January 1954 – The Dockers attended the New Year Ball at Poole Harbour yacht Club.
Lady Docker wearing the ”Daimler” dress of white slipper satin embossed with diamante and sequins to represent every model of Daimler car.
Sir Bernard is dressed as a ”garage hand”.

For 1955 the company also unveiled a more powerful version of the Regency II as the One-O-Four.  This model differed externally only in detail, but under the bonnet was an uprated 3½ litre engine producing 137 bhp. The car got its name from the 104 mph clocked by the prototype during trials.

This model was short-lived although the ‘Ladies items’ were later offered as ‘optional extras’ in the catalogue.

In September 1952 she slapped a waiter from the Monte Carlo Casino in the face, resulting in the Dockers being banned from the Casino.  The press stories were discussed in Parliament including raising questions about how much money they had taken out of the country during a period when people were only allowed to take out £25 each.  The negative publicity arising from this episode and the possibility of a court case about the currency issues caused the Directors of the Midland Bank to ask for Sir Bernard’s resignation in January 1953.

They attended the wedding of Prince Rainier of Monaco and Grace Kelly in April 1956 and after an incident at the christening of Prince Albert in April 1958, they were banned from Monaco altogether.  Lady Docker was not happy about her son, Lance Callingham (it was his 19th birthday), not being allowed to attend the event and while seated at a table at the Hôtel de Paris, she tore up a paper Monegasque flag.  As a result, Prince Rainier of Monaco had her expelled and their christening gifts were returned.  This ban was extended throughout the French Riviera through a 1951 treaty with France.

In 1954, she invited some of the miners from the Water Haigh colliery she visited at Woodlesford to a champagne party on the Dockers yacht, where she danced the hornpipe.

In 1955, while wearing a sequin dress and diamonds at the charity event for the Cancer Relief Fund in Castleford’s, “Reight Neet Aht”, she won a rigged match at the marbles championship.  The following year, she challenged the suburb of Collingwood to a marbles match while watching the Summer Olympics in Melbourne, Australia.

Lady Docker and Sir Bernard’s extravagant lifestyle was often funded by tax write-offs and company expenditures.  In the early 1950s BSA purchased Glandyfi Castle in Wales, for use by the Dockers, and this was refurbished at the company’s expense.  Lady Docker only ever had use of The Docker Daimlers, ownership being retained by Hooper.  Her ‘business expenses’ for the 1956 Paris Motor Show included a £5,000 gold and mink outfit as she claimed she ‘was only acting as model’ at the show – which itself was rejected by the Inland Revenue.

By 1956 the Daimler Company was not in good health and the top management became increasingly disillusioned with the Dockers.  In May 1956, Sir Bernard Docker was voted out of office by six directors against three and a new management team took over the ailing company.  Jack Sangster of Triumph Motorcycles (a BSA company since 1952) took over as chairman and managing director of Daimler.  This was all ratified by the shareholders at an extraordinary meet in 1 August 1956.  On 29 August it was announced that ‘Mr R.E.Smith’s [Lady Docker’s brother-in-law] appointments with the Daimler Group of companies have been terminated by mutual agreement.’  The Company sold Glandyfi Castle.  Lady Docker also left the Hooper board.

After Sir Bernard Docker lost his position as chairman and managing director of Daimler, the Dockers began to run out of money.  Their estate in Hampshire was sold and the MY Shemara was put on the market for £600,000, but only sold for £290,000.  In 1965 the Dockers moved to Jersey in the Channel Islands becoming tax exiles.  Lady Docker is reported to have said of the people of Jersey “they are the most frightfully boring, dreadful people that have ever been born”. The couple spent some time in Palma, Majorca, presumably among less boring people, but with Sir Bernard’s health failing they reurned to Britain where he spent his final days at Branksome Park care home, dying on 22 May 1978.  Lady Docker had him buried next to her first husband Clement Callingham.

A sad and lonely Lady Docker spent her final years living in the Great Western Royal Hotel in Paddington, London where she died in her sleep on 11 December 1983, at the age of 77.  The family told the undertaker to expect over two hundred mourners, but only twenty nine attended the funeral and she was buried in her first husband’s family plot at the churchyard of St James the Less, in Stubbings, between Clement Callingham and Sir Bernard Docker.