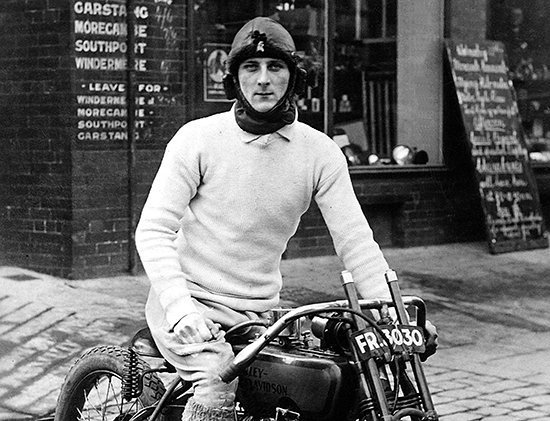 To trace the birth of Jaguar, we go back to the northern seaside town of Blackpool, where a young motorcycle enthusiast by the name of Bill Lyons, not yet 21 years of age, met William Walmsley, who was building a stylish sidecar which he was attaching to reconditioned motor cycles.

Young Lyons immediately displayed the two traits that would be his greatest qualities for the next 50 years or so.  His business acumen shrewdly spotted a good commercial opportunity and his eye for style appreciated the attractive appearance of these normally mundane creations.

He felt there was great potential if the activity could be organised along business lines and production increased to make the operation viable. 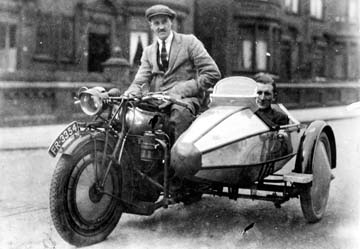 William Walmsley on Brough and
William Lyons in Sidecar

In September 1922, as soon as Lyons came of age, the Swallow Sidecar Company was formed with a bank overdraft of £1,000.

Humble first and second floor premises were obtained in Blackpool and, with a handful of employees, production of sidecars commenced. 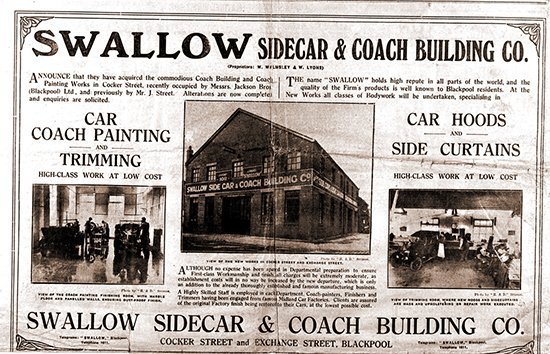 Lyons saw another opportunity.  He created a stylish two-seater body which was mounted on the Austin Seven chassis.  An order for 500 was obtained from one of the main London garages, Henlys, and production commenced.

At £175, or £185 with a hinged hardtop, the splendid little Austin Seven Swallow proved highly popular and the company introduced a Swallow body for the larger Morris Cowley chassis.

The range increased significantly with the introduction of the Austin Seven Swallow Saloon in late 1928.  Priced at £187 10s, the Saloon was not expensive, but it looked it.

With sales of the cars and sidecars continuing to increase, it was decided to move to the Midlands, traditional heartland of the British motor industry.  Thus, the young company was moved ‘lock, stock and barrel’ to  Coventry. 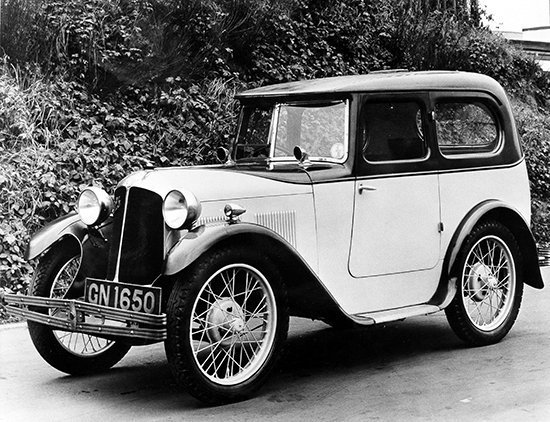 At the next annual London Motor Show of 1929, three new Swallow models appeared for the first time.  These were based on the Fiat Tipo 509A, the Swift Ten and Standard Big Nine.

Most important of these was the Standard for it was the beginning of a significant relationship, as we shall see.

The Standard Swallow was a rather larger saloon and sold for £245.  Again the body style offered a more extravagant treatment than the manufacturer’s own product and an extrovert range of colour schemes.