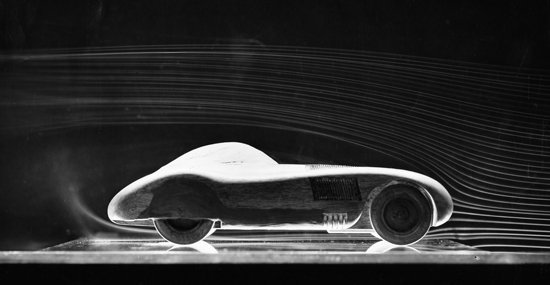 After the three XK120s’ exploratory trip to Le Mans in 1950, it was realised that Jaguar had the makings of a successful competition car if weight could be saved and aerodynamics improved.  Consequently Lyons was persuaded by Heynes and the Manager of the Service Department, Lofty England, that a car should be produced solely with racing in mind.  Hence was born the XK120C, or as the car is more generally known, the C-type. 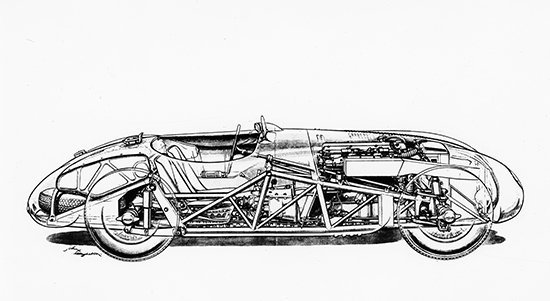 To reduce weight, a multi-tubular triangulated frame was chosen and designed by Bob Knight.  The body was designed by aerodynamicist,  Malcolm Sayer, who had joined the company from the aircraft industry.  Many components were carried over from the production XKs including the engine but with larger exhaust valves, higher lift cams and larger SU carburettors. 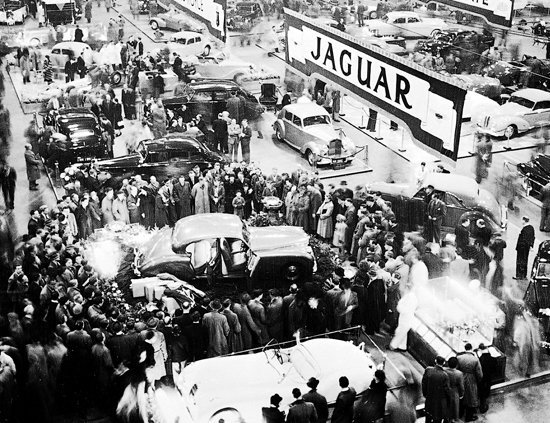 The 1950 Earls Court Motor Show saw the unveiling of the Mark VII saloon and once again Lyons ‘stole the show’.  Designed with the US market in mind, it was, by European standards, a very large car.  Americans took to the Mark VII and some $30m worth of orders were taken within months of the car’s introduction. 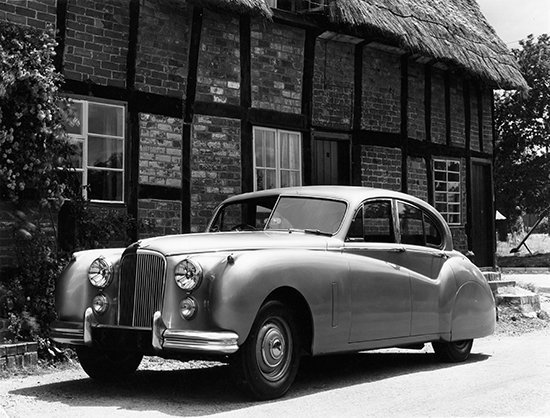 Such was the demand that a larger factory was required and the company moved to Browns Lane, Coventry, formerly a Daimler shadow factory.

1951 also saw an addition to the XK120 range – The Fixed Head Coupe. The long distance capabilities of the Fixed Head Coupe were demonstrably proven when Bill Heynes’ own road car was taken to Montlhery Autodrome near Paris.  Here Stirling Moss and three others drove the car for seven days and nights at an average speed in excess of 100 mph. Three C-types were finished just in time for Le Mans in 1951.  They were to be driven by Stirling Moss and Jack Fairman; the Peters, Walker and Whitehead; and Leslie Johnson with Clemente Biondetti. 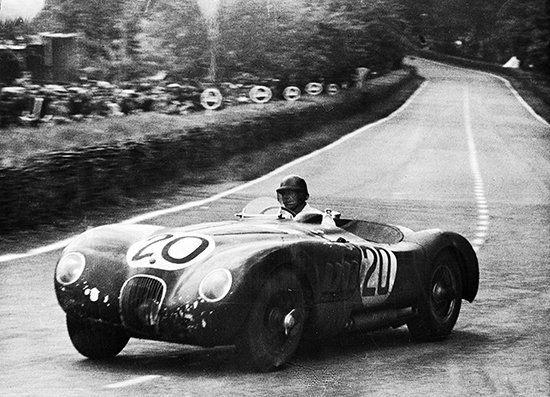 Moss set off at a great rate of knots breaking the lap record and Peter Walker and Peter Whitehead recorded a remarkable victory first time out for the C-types.

Unfortunately the return to France in 1952 did not yield the expected second victory.  Jaguar fitted more streamlined bodies but was unable to test them at sustained speeds of 150 mph.  Within hours all three had retired with overheating problems. 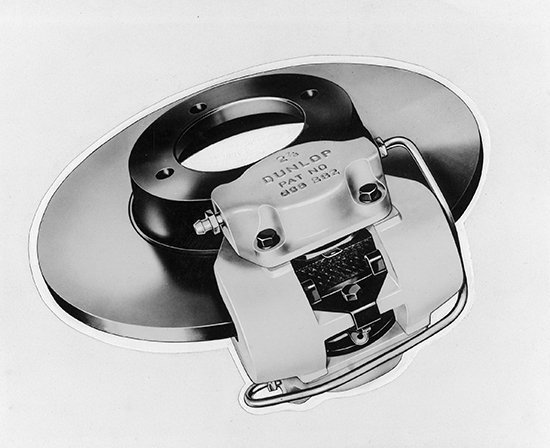 In April 1953 a third version of the XK120 the Drophead Coupe was launched.  Meanwhile Jaguar engineers had been working in conjunction with Dunlop on a completely new type of brake that had, as yet, only been used on aircraft.  The new development was the disc brake and was to be Jaguar’s secret weapon upon their return to Le Mans in 1953.

The 24 hour race that year was notable for having representatives from most of the leading European motor car manufacturers and most of the top Grand Prix drivers.  With their fade-free brakes the C-types could decelerate at the end of the three and a half mile Mulsanne Straight from speeds of around 150 mph, time after time, with complete confidence and leave their braking far later than their rivals.

The result was a complete walkover, the Jaguars finishing first, second and fourth.  The winning car was driven by a couple who typified the amateur drivers of the era.  Major Tony Rolt had won the Military Cross for distinguished war service and Duncan Hamilton was a larger than life character to whom it was very much sport for sport’s sake. 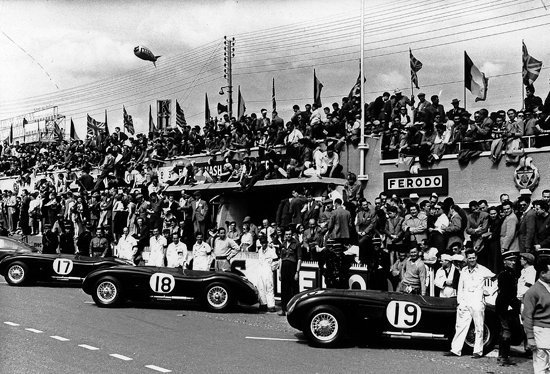 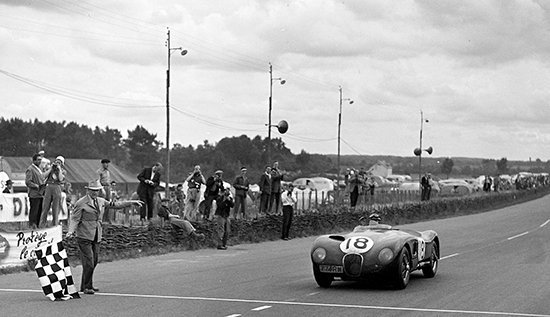 In 1954 the XK120 were superseded by the mechanically updated  XK140 fitted with the more powerful 190 bhp XK engine which had been used in the Special Equipment 120’s.

The new models were visually similar to their predecessors differing in external details only.  The fixed head had an extended roof line and together with the Drophead Coupe, was given two small extra seats in the rear. 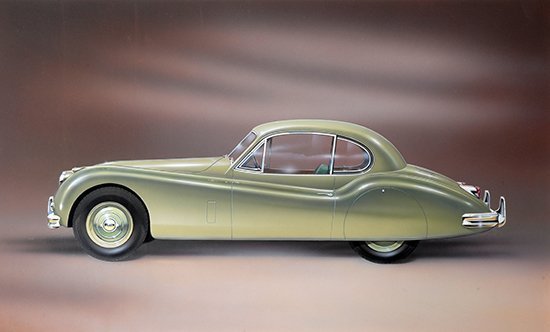 The C-type was just about to be superseded by the D-type.  A prototype had made a couple of private appearances in 1953 and this was a halfway stage between the ‘C’ and eventual ‘D’ models. 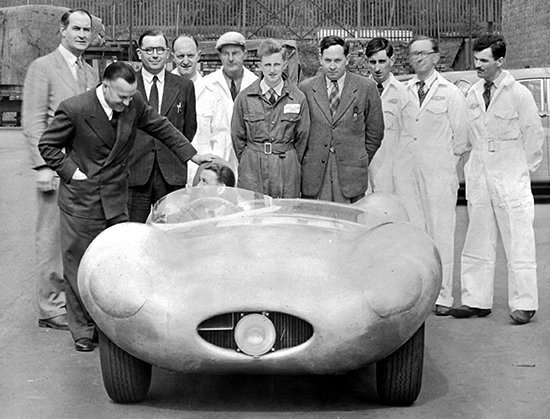 The D-type was to break fresh ground as it was a monocoque construction.  To this ‘tub’ of magnesium alloy was attached a tubular front sub-frame which carried the engine, steering and front suspension.  With its bag tanks for the fuel, the D-type borrowed a good deal from aircraft practice.  It was created by Bill Heynes and Malcolm Sayer. 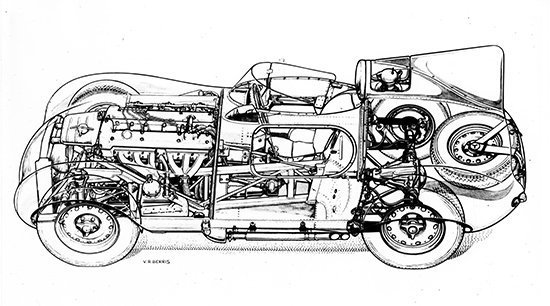 The new D-types were taken to Le Mans in 1954 with high hopes pinned upon them.  The cars had engine problems early on in the race, with the cause diagnosed the drivers began a valiant battle to make up lost ground.  Further frustration was experienced when Tony Rolt was pushed off by a slower competitor and the heavens opened to almost flood the track – Duncan Hamilton was getting wheelspin at 170 mph! 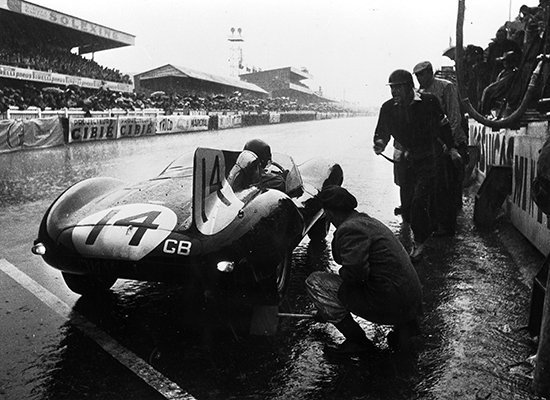 After many hours of driving as fast as they dared, during which the D-type ran faultlessly, they finished just one minute and 45 seconds behind the winning Ferrari after 24 hours.

Revenge was gained a few weeks later when Peter Whitehead  and  Ken Wharton won at the 12 hour race at Reims. Jaguar had now carved for itself a fine reputation.  It had in production a superb large saloon and a very fine sports car, but it needed a high volume smaller car.

One million pounds in 1955 was a very significant amount and that was the investment expended on designing and developing Jaguar’s important new compact saloon.  The saloon’s unitary method of construction was a new venture for Jaguar.  This type of body, in which the basic shell doubled as the chassis, had the advantage it saved weight and was inherently more rigid. 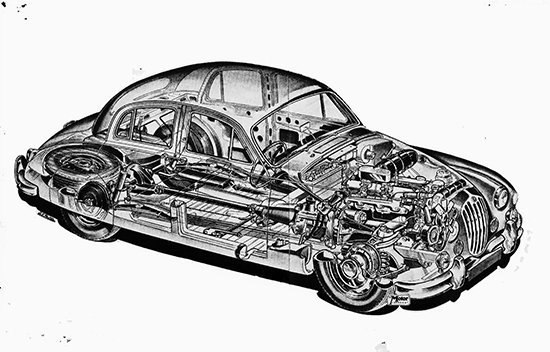 The decision was made to use a reduced version of the 3.4 litre six cylinder.  Thus a 2.4 litre was produced and fitted to the new saloon, the model simply being known as the Jaguar 2.4.  Indeed this was to be a most important model for Jaguar and would remain in production, in one form or another, for more than 10 years.

Le Mans 1955 had all the makings of a titanic struggle.  British driver, Mike Hawthorn, joined the Jaguar team as Moss had moved to Mercedes-Benz in his quest for Grand Prix success.  For the first hour or so a magnificent race was fought by Castellotti in the Ferrari, Fangio in the Mercedes, and Hawthorn in a D-type.  The D-types had been revised and now wore ‘long-nose’ bodywork to improve air penetration.  A new ‘wide angle’ cylinder head with increased valve sizes had been designed with a resultant increase in power to 275bhp.  Sadly this was the year of the tragic crash with a large number of spectators killed when one of the Mercedes crashed into the crowd.  Fangio and Hawthorn were locked in a thrilling tussle, passing and re-passing until the remaining Mercedes were with-drawn.  Hawthorn and Ivor Bueb went on to victory. 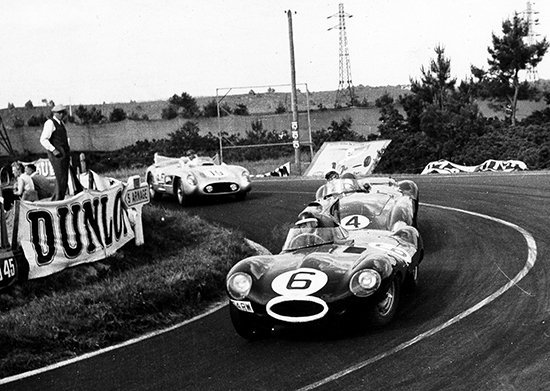 Just as Jaguar had manufactured a small quantity of ‘Production C-types’ so they now began selling a limited number of ‘Production D-types’.  The big Mark VII’s were showing that they could also be used to good effect in competition.  Indeed Ronnie Adams crowned a number of successes with victory in the 1956 Monte Carlo Rally.

Jaguar thus became the first manufacturer ever to win both Le Mans and the Monte Carlo Rally in the same year.  Indeed 1956 was a very special year for Jaguar and Sir William Lyons, for such he had been bestowed in the New Year’s Honours’ List.  This was then followed in March by the first visit by Her Majesty The Queen and Prince Philip to a Jaguar factory. 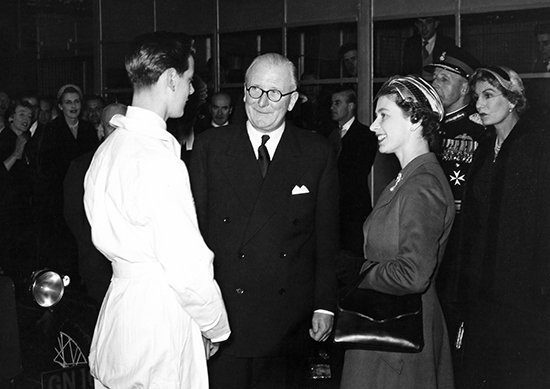 Le Mans that year was a curious one for Jaguar.  On the second lap two of the cars collided with each other in the Esses and the third was put out of contention by a split fuel line.  It would have been a complete disaster had it not been for the fact that Jaguar had, in effect, a back-up team.  A private Scottish team by the name of Ecurie Ecosse had been racing Jaguars for several years and were running two D-types.  Luckily for Jaguar the one driven by Ron Flockhart and Ninian Sanderson  crossed the line in first position. 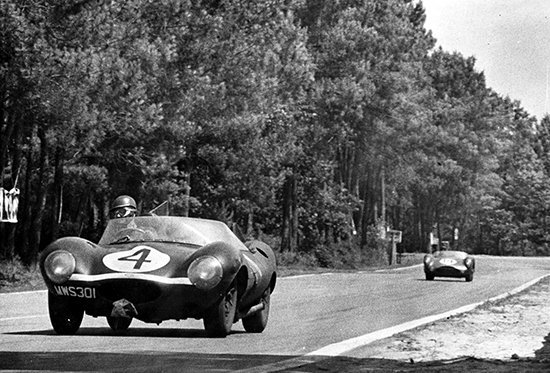 Late in 1956 the Mark VII was replaced by the evolutionary Mark VIII and around this time the XK-SS, a road-going version of the D-type, with refinements, was produced.  Amazingly, this was to use up D-type parts which were surplus because of poor sales of that model!  However, XK-SS production was abruptly halted after just 16 had been made due to an enormous, and potentially catastrophic, fire at the factory.  Luckily damage was reasonably restricted, and with marvellous co-operation from workforce and suppliers, normal production was resumed remarkably swiftly. 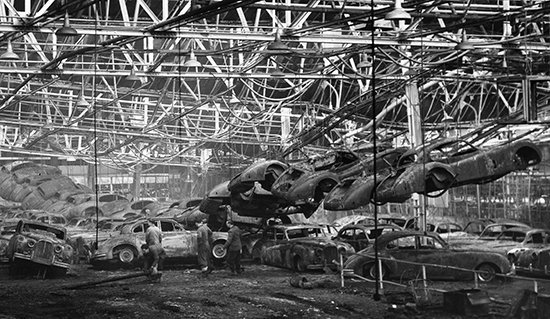 The same near-disaster almost ruined the launch of a new sister for the 2.4 saloon.  Logically, Jaguar had decided to fit the 3.4 engine in the saloon body and this made a very sprightly sporting saloon.  Maximum speed was 120 mph and 60 mph could be reached in just 11.7 seconds. 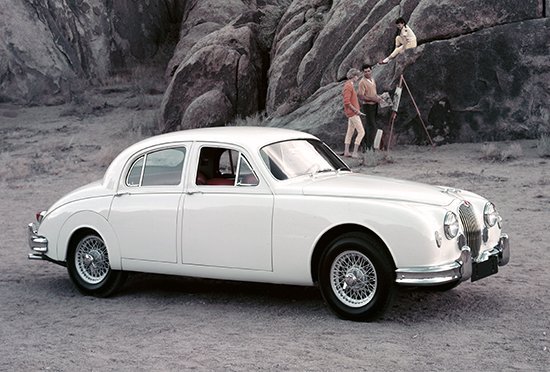 Having developed disc brakes in the best testing conditions possible – endurance racing – Jaguar were ready to fit them to production cars and the first models to benefit were the new XK150s in May, 1957. 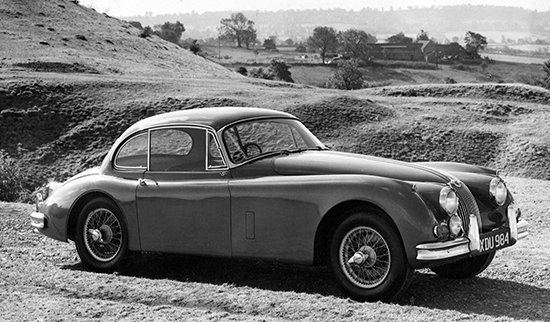 At the end of 1956 Jaguar announced that it intended retiring from motor racing. There were no factory D-types at Le Mans in 1957, but there were five private entries.  Ecurie Ecosse had a pair of ex-works cars out once more.  All five D-types finished, the Ecurie Ecosse cars driven by Flockhart and Bueb and Sanderson and Lawrence, taking the first two places, the French duo of Lucas and Mary third, and the Belgian pairing of Frere and Rousselle fourth.  Duncan Hamilton and American Masten Gregory came home sixth. 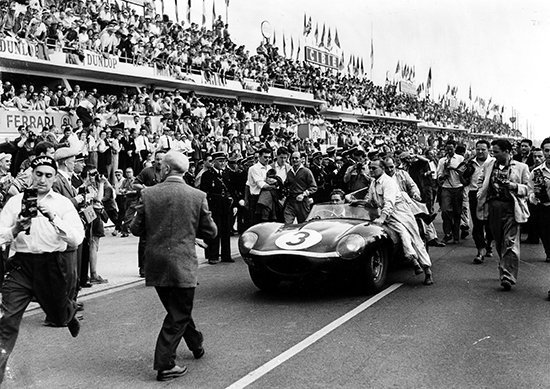 In early 1958 the roadster version of the XK150 joined the other two body styles in answer to demand from the States.  This roadster had the luxury of wind up windows and a less crude hood.  Coincidental with the launch of the XK150 Roadster was the introduction of the ‘S’ variant with a new cylinder head developed by Harry Weslake.  This was known as the ‘straight port head’ and, with three SU carburettors, increased power considerably to 250bhp.

With this engine the XK150 could attain 133 mph and reach 50 mph from stationary in just 7.3 seconds.  Soon afterwards the ‘S’ engine became available in the other XK150s.

At the 1958 Motor Show the Mark VIII was succeeded by the Mark IX.  Visually the cars were virtually identical, but the new car was given an enlarged 3.8 litre version of the trusty XK engine and disc brakes.  Power assisted steering was also offered. 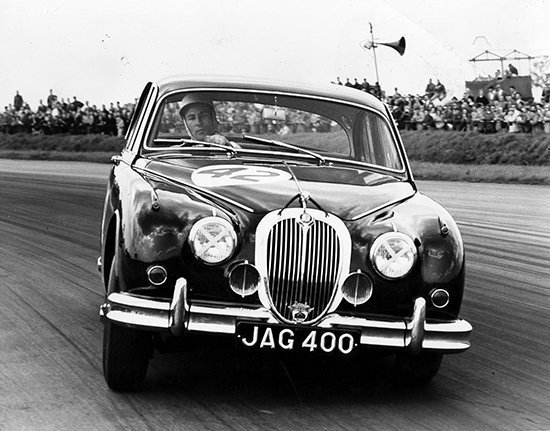 During 1959 it was the turn of the small saloons to receive attention and a vastly improved Mark II model was announced towards the end of the year, benefiting from an increased rear track and disc brakes fitted as standard.  The changes that were most apparent, however, were in appearance, with the glass area being increased significantly by using slender roof supports.  The 120 bhp 2.4 litre and 210 bhp 3.4 litre models continued to be offered, but were joined by a racy stablemate in the shape of the new 220bhp 3.8 litre.  Not surprisingly, a number of Mark I’s and II’s were raced.  Rallying successes were gained with overall success in the Tulip Rally in 1958 and team prizes and class wins in the Monte Carlo, RAC and Alpine Rallies.  Five successive victories were gained in the increasingly tough Tour de France.  The 1963 event, which saw Jaguar’s last victory, consisted of 3,600 miles of high speed motoring. 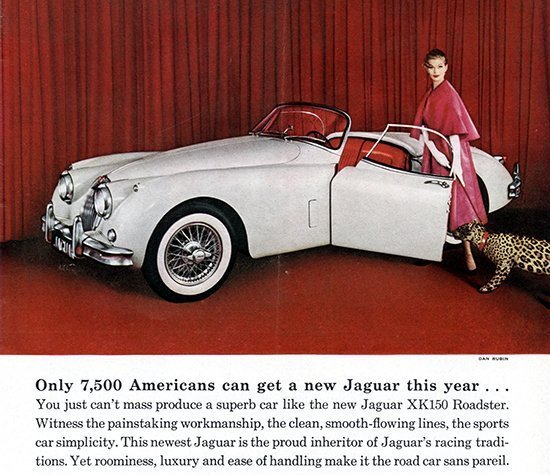 In 1960 Jaguar purchased the motor pioneer firm of Daimler.   Jaguar needed more space and Daimler had a large factory in Radford in Coventry, to which engine manufacture would subsequently be transferred.

As the horsepower race continued to hot up in the States, Jaguar countered once again by offering the new 3.8 litre engine in the XK150 from 1960.  This could also be had in triple SU carburettor 265 bhp ‘S’ form giving a top speed of 136 mph.