Purchase of Daimler, start of The Jaguar Group and the launch of “The most beautiful car in the world”

The 1960s saw the start of the change from Jaguar being a single company to being a major industrial group.  The Daimler company in the UK had started in 1895 and built its first car in Coventry in 1897.  Daimler struggled financially and in 1910 was bought ought by the Birmingham Small Arms (BSA) Company.  In 1908 Daimler had bought a large plant in the Radford area of Coventry and by 1937 had moved all their operations to the Radford Site.

Having moved from Foleshill to the Browns Lane site on the edge of Coventry, Jaguar continued to grow rapidly during the 1950s and bought the site outright in 1959, a transaction which Sir William Lyons counted among his most satisfying achievements.  Increased demand towards the end of the 1950s, especially for the company saloons the 2.4 and 3.4 (later known as Mark I) and then the Mark II, meant the company was struggling for more production space.  Requests to build on the site were refused as the Government wanted to move manufacturing to under-developed areas (this was the period when the Government encouraged Ford to setup in Halewood, Liverpool and Rootes Group to start making Hillman Imps at Linwood, Glasgow in Scotland).  Lyons did not want to move any production from Coventry but a solution presented itself.  Daimler had been losing money under BSA ownership and the board were looking for a way out.   Lyons struck a deal with BSA Chairman Jack Sangster to buy the Daimler name  and business, complete with the whole Radford Factory.

On 26 May 1960 The BBC and the Press announced that Jaguar had purchased the Daimler company from BSA for £3,110,000, effectively doubling the size of the company. This was the first that the rest of the Board of Directors knew about the purchase.

While Lyons had bought Daimler primarily for the Radford Plant the purchase became the start of what was to become the Jaguar Group, purchasing Guy Motors from the liquidators, in 1961 and then Coventry Climax in 1963.

Birth of the E-type

Malcolm Sayer, the legendary aerodynamicist, had been working on a car that could be both a sensational road car and a Le Mans winner – the E-type.  Sayer was one of the first to apply the principles of aerodynamics to motor car design.  During development the E-type project diverged into two distinct categories; a road car and a sports racing car, a prototype of the latter being built in 1960. 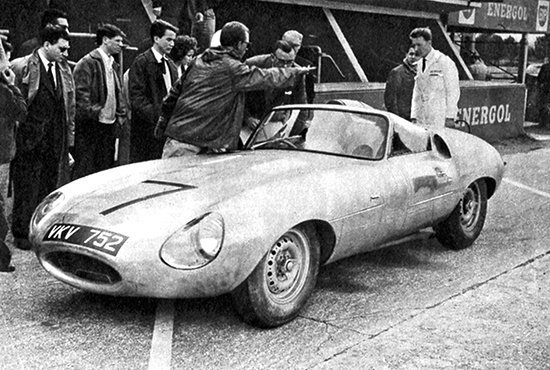 Briggs Cunningham, the American sportsman and gentleman racer, had, in the mid-fifties, transferred his allegiance to Jaguar.  He opened a large dealership and ran D-types in American colours.  Whilst visiting Jaguar in early 1960, he was shown the prototype, E2A, and persuaded Lyons to let him run it at Le Mans that year.  Lack of development time mitigated against the venture and, although it set the fastest time in practice, retirement followed in the race during the early hours of Sunday morning.

By 1961 the XK150s, though good cars, were no longer pacesetters and Jaguar needed to make a quantum leap forward to maintain sales and prestige. 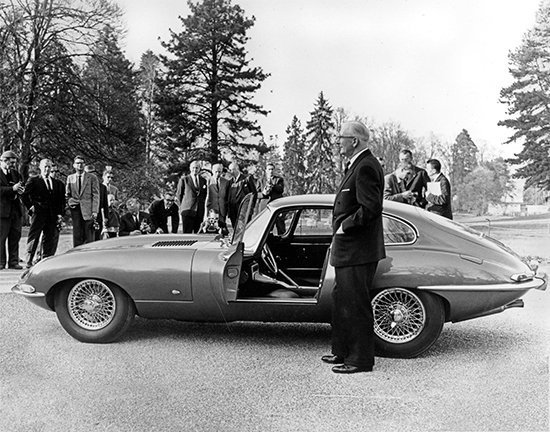 The E-type, which was announced at Geneva in March 1961, was just that.  Like the XK120 in 1948, it was an absolute sensation.  The body styling was sensuous, beautiful, and the car set new standards in all areas.  A brand new independent rear suspension was designed by Bob Knight.  The car had the triple carburettor 3.8 litre XK engine first seen in the XK150 ‘S’.  Producing 265 bhp in a lighter aerodynamic body gave virtual 150 mph performance, with acceleration of 0-60 mph in 6.9 seconds.

The E-type, or XK-E as it would be known in the States, seemed to have the best of all worlds.  It was very fast, had vivid acceleration, great flexibility, unheard of comfort and refinement for such a car, and pure good looks.  Even the launch was dramatic.  Most testing had been carried out on a couple of open roadsters, but it was decided to produce a Fixed Head after a brilliant American sheet metal craftsman, Bob Blake, created a mock up for Lyons.  The Fixed Head version was built and loaned to various motoring magazines and newspapers in early 1961.  The car was just capable of the magic 150 mph, a relief to Jaguar who had already printed the brochures. This same car was presented to the press at Geneva. 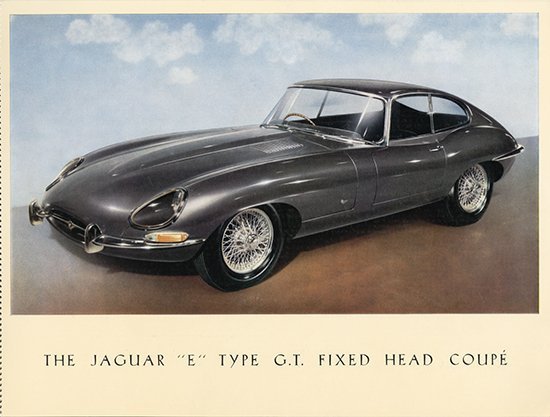 The press reaction was ecstatic, as was that of the public.  Rarely, if ever, had a car been so lauded.  The price added to the incredulity at £1,830 for the Roadster and £1,954 for the Fixed Head.  Aston Martins were twice the price and Ferraris nearly three times. 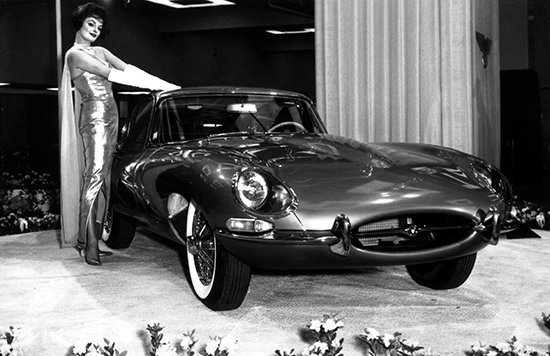 A few weeks later two Roadsters and two Fixed Heads were shown at the New York Motor Show.  The reaction was equally extraordinary.

As with the XK120, Jaguar’s claims were tested on the race track.  Two cars were entered in the 25 lap GT Trophy race on the twisting, undulating circuit at Oulton Park. They were entrusted to Graham Hill and Roy Salvadori, who were up against Ferraris and Aston Martins. 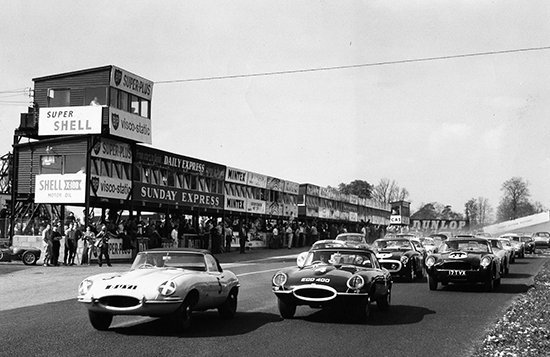 Launch of the Jaguar Mark X

Later the same year, Jaguar announced another new model, a replacement for the Mark IX.  This time the new Mark X was no evolutionary update but a completely new concept.   Whereas the Mark IX had still employed a separate chassis, the Mark X was of full monocoque construction.  It used a widened version of the new independent rear suspension as fitted to the E-type and was fitted with the same engine. 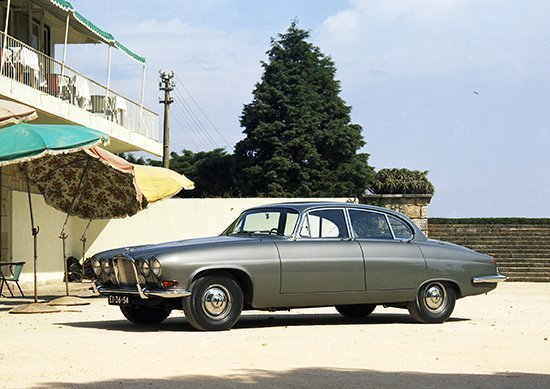 The car was designed almost wholly with the US market in mind.  It was very large by European standards and seated five people.

In spite of the car’s bulk, it was not slow with a top speed of 120 mph, and it certainly appealed to Americans with the US and Canadian dealers placing orders worth 63 million dollars (£22.5m).

Unfortunately the model did not turn out to be quite as successful as hoped, though gradually it matured into an excellent vehicle capable of transporting four or five people quickly and in great comfort. 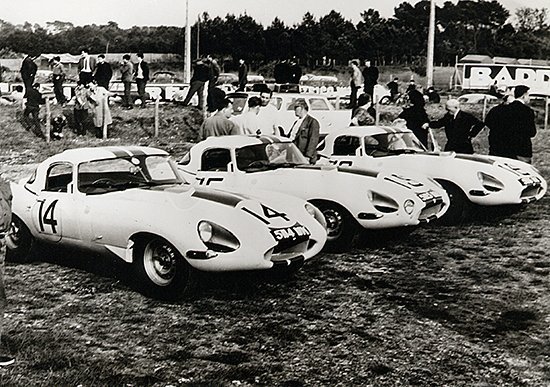 Three E-types were privately entered for the Le Mans 24 hour race in 1962.  One retired but the Briggs Cunningham entry, driven by Briggs and Roy Salvadori, finished a highly creditable fourth followed by the Peter Lumsden / Peter Sargent E-type one place behind.  Jaguar produced a small batch of E-types specifically for racing, generally known as the ‘Lightweight E’, these cars, of which just 12 were built, had an aluminium monocoque body and engines with a block of the same material.  With fuel-injected, dry sump engines, considerably stiffened suspension and wider wheels, they posed a genuine threat to the Ferraris and beat them on a number of occasions.

In 1963 Cunningham took three Lightweight E’s to Le Mans.  Unfortunately one retired with gearbox problems, the second crashed heavily after hitting an oil patch at 170 mph on Mulsanne and the third only managed to finish ninth after a long pit stop to repair a badly damaged bonnet. 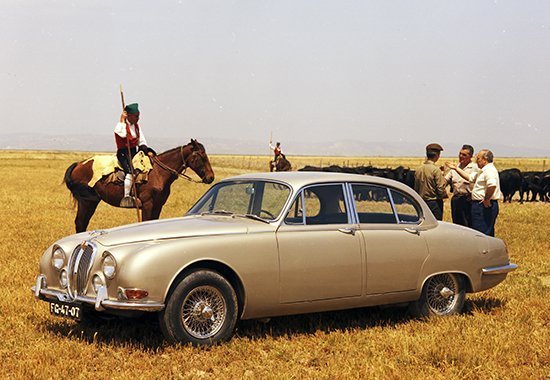 Also in 1963 the S-type saloon car was announced.  This was a pleasing compromise between the Mark II and the Mark X in shape.

Two ‘Lightweight Es’ were entered for Le Mans in 1964.  Sadly, both cars retired with mechanical problems.   To improve torque, the E-type was given a new 4.2 litre XK engine and synchromesh gearbox.

Sir William Lyons had felt for some time that the company needed a four seater ‘sports car’.  In 1966 this was achieved by lengthening the E-type and adding a pair of small seats in the rear, so that the car could ‘extend dad’s youth for another seven years’ as Motor put it.

The new car, known as the 2+2, was not to everybody’s liking but certainly made a more practical machine. 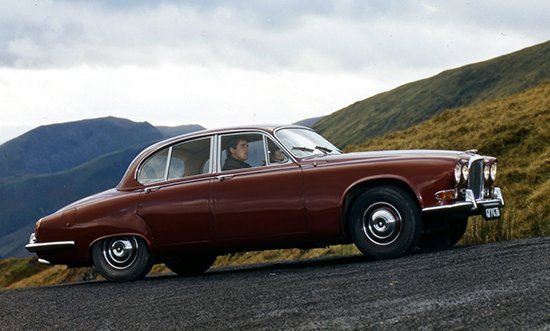 The 420 saloon was introduced in 1966.  This was akin to a revised S-type with the Mark X frontal styling treatment.  Offered, as the name implied, with the 4.2 litre engine, the 420 was an excellent car.

For many years Jaguar had been Britain’s top dollar earner and the most popular imported car in the US.  By 1966 Jaguar’s post-war exports totalled £200m.  A year later the Mark IIs metamorphosed into 240s and 340s.  The models, now near to the end of their lives, were rejuvenated by a few minor trim changes and the 3.8 model was dropped from the range. 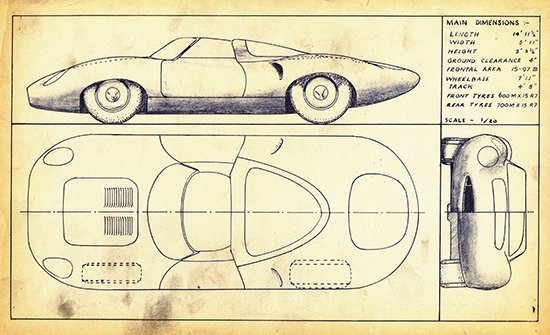 From time to time Jaguar’s thoughts had turned to competition and Malcolm Sayer had wanted to build a mid-engined car.   William Heynes and colleagues had realised that if Jaguar was to remain competitive it would need to design a completely new engine, preferably of 12 cylinders.

In 1965, a small team including Sayer and Mike Kimberley, later to head Lotus Cars, drew up plans for a mid-engined sports racing car.  To power it, they designed a four cam V12 of 5 litres. 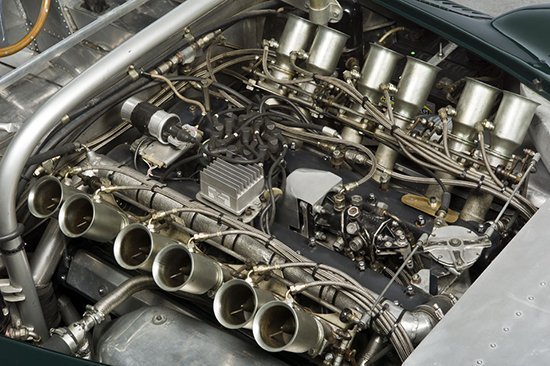 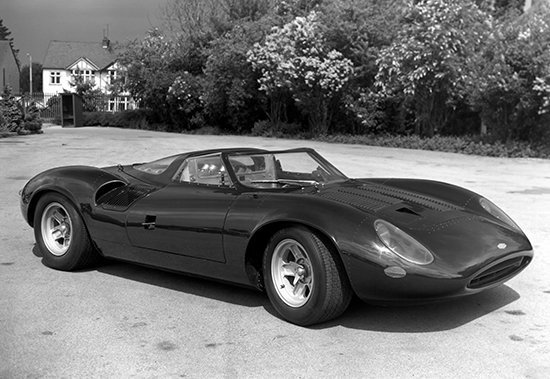 The car, the XJ13, was built in great secrecy in 1966 but there was an unfortunate lack of urgency about the project.  It was eventually run in 1967.

Sadly it was never to race as the FIA reduced the engine size to 3 litres and has become a museum piece for enthusiasts.

The shape was another Sayer masterpiece.  It was one of the most beautiful cars ever conceived, and a lasting tribute to this brilliant man who prematurely died in 1970.

In 1968 the E-types underwent changes dictated by the US Federal Regulations covering both safety, following Ralph Nader’s  campaigning and his book ‘Unsafe at Any Speed’ and the first Federal attempts at controlling emissions. With a less clean shape and increasing weight, the E-type was in need of another boost both in terms of prestige and performance. 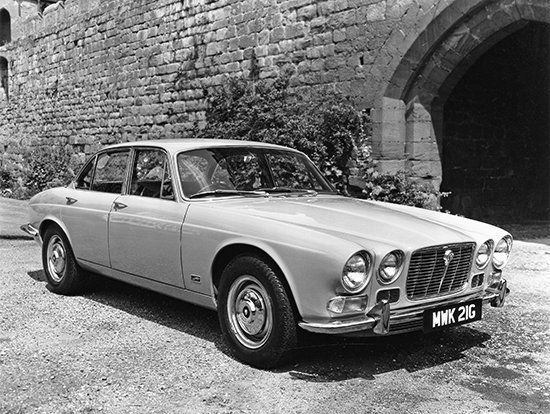 Launch of the Jaguar XJ6

In the late sixties Jaguar had rather too many saloon models for a relatively narrow sector of the market.  Equally, those worthy models were becoming a little outdated and it was time for another quantum leap and some rationalisation.

The XJ6 saloon arrived in 1968 and it was undoubtedly just what was required.

Without question it was the finest Jaguar yet, and met with instant and ecstatic praise. The shape was another Lyons masterpiece and is regarded by many as the pinnacle of his career.

In an era when cars were starting to lose their character, the Jaguar strongly retained its identity.  Not only did the car look superb but thanks to Bob Knight’s sterling work on chassis and suspension development, the XJ6 also set new standards of ride and refinement. 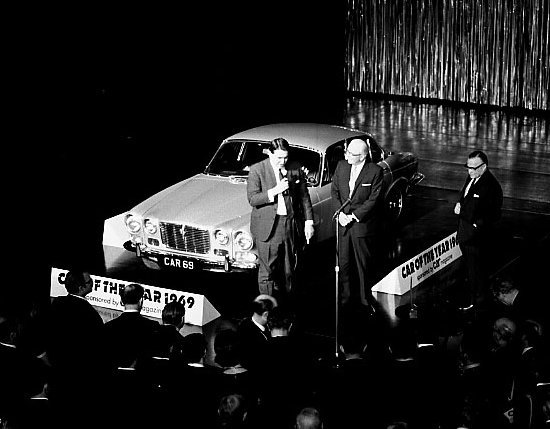 With the advent of the XJ saloons, all other Jaguar saloon models (Mark II and S-type) were deleted with the exception of the 420G which continued for a while at low volume.

To satisfy a larger spread of the market with just one body style, Jaguar offered a choice of the familiar 4.2 litre XK engine, or a new 2.8 litre variation.

However, the majority of XJ6’s were sold with the larger engine.  The price, at just under £2,253, as ever was quite remarkable, and the waiting lists were long, to say the least.