The Crown of Glory

Sir William Lyons’ decision to concentrate on one model proved to be the right one, for the XJ range eventually sustained the company for nearly two decades but the XJ needed another engine to satisfy a wider range of markets.  Also by 1969, emission controls and safety regulations were blunting the E-type’s once electrifying performance. 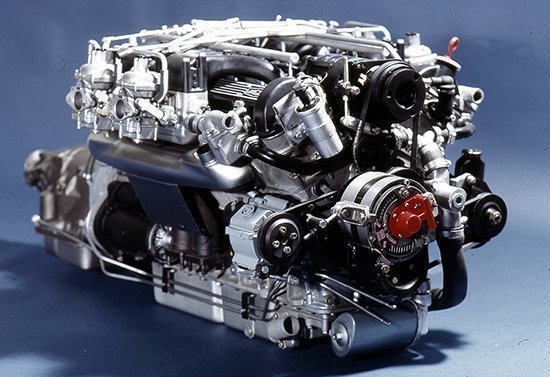 In 1963 Jaguar had acquired Coventry Climax who in the fifties and sixties had built highly successful Grand Prix engines.  Wally Hassan had left Jaguar in the early fifties, joined Climax and been responsible for the world-beating engines.

He was now brought back into the fold and there was nobody better to design Jaguar’s new engine.  Hassan and colleague, Harry Mundy, carried out extensive research with single camshaft engines before building ‘their’ single cam V12 of 5.3 litres.

To save weight, the block was to be of aluminium and for the first time transistorised ignition was used.  Both to give the E-type a boost, and to prove the engine in a relatively low volume model, the new V12 unit was offered in the E-type from 1971. 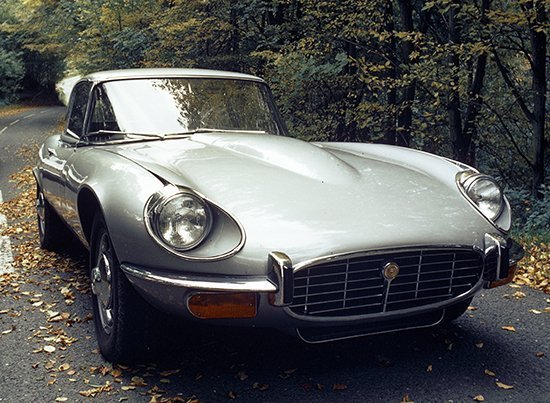 The appearance of the Series 3, as the V12 engined E-type was designated, was changed quite considerably.  A larger mouth air intake was now covered by a grille, and flared wheel arches allowed for the increased track and bigger tyres.

The Fixed Head model was dropped and just the Roadster and 2+2 variants produced.  The V12 engine was remarkable for being silky smooth.

It powered the car effortlessly and thus the image of the V12 E-types was entirely different from that of their predecessors. 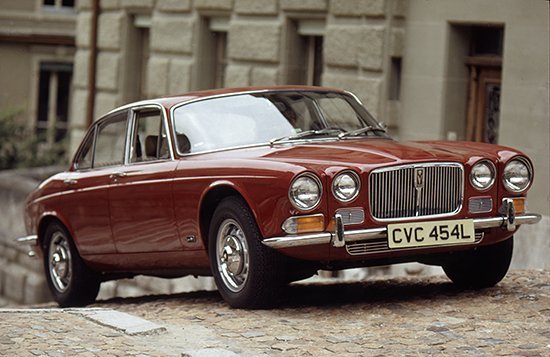 In 1972 the car for which the engine had been primarily designed was finally launched.  The XJ12 was another triumph of even greater proportions than the XJ6, which it joined rather than replaced.  This was Sir William Lyons’ crowning achievement.

Performance, not surprisingly, was superb and Jaguar could now claim that the XJ12 was the fastest production four-seater in the world.  That maximum speed was just short of 140 mph, whilst 60 mph could be accelerated to in 7.4 seconds. 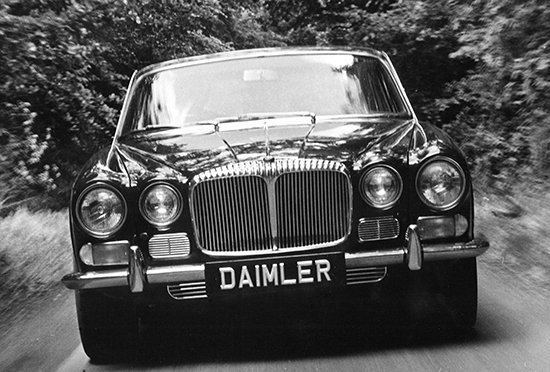 Daimler versions of the XJ saloons were also produced though they were identical mechanically and differed in appearance only by having the traditional fluted grille.  In 1972 a Vanden Plas version of the V12 engined Daimler Double Six was introduced.

One criticism levelled at the XJ saloons was that they were a little cramped in the rear and so, in September 1972, a longer wheelbase Vanden Plas Daimler Double Six was introduced.  Soon after that the long wheelbase body became available for the rest of the range. These were designated the XJ6L or XJ12L, as appropriate. 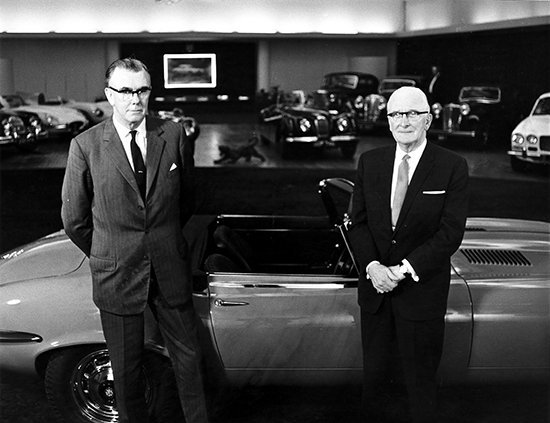 Aged 71, Sir William Lyons retired in 1972, handing over the Jaguar reins to Lofty England.  The company had been in existence for some 50 years and was now one of the most respected in the world.

An autocratic man, Lyons had led from the front, building a sound business empire and a product that enjoyed a rare loyalty.  Apart from being a superb businessman, he was one of the finest stylists of his era.  Most of his designs have stood the test of time and are a monument to his unique contribution to the history of the car in the twentieth century. 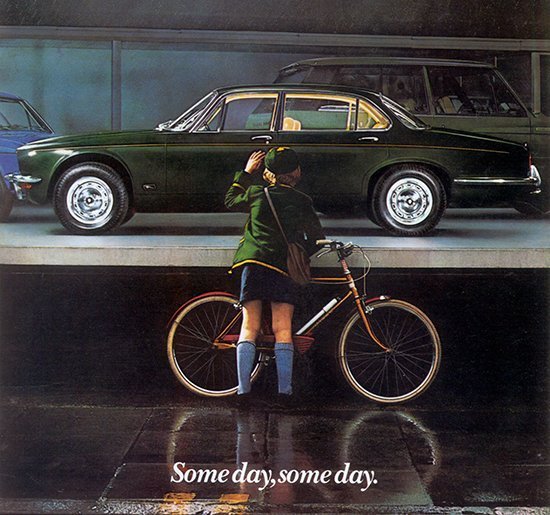 In 1973 the immensely popular XJ’s received a facelift, the new Series II versions were introduced at the Frankfurt Motor Show.  Also at Frankfurt, Jaguar launched a new body style. This was the XJ Coupe and exceptionally stylish it was too.  The basic shell was changed to have just two doors and no window frames. In this guise the XJ6C and XJ12C were extremely good looking and had a sporting appearance. 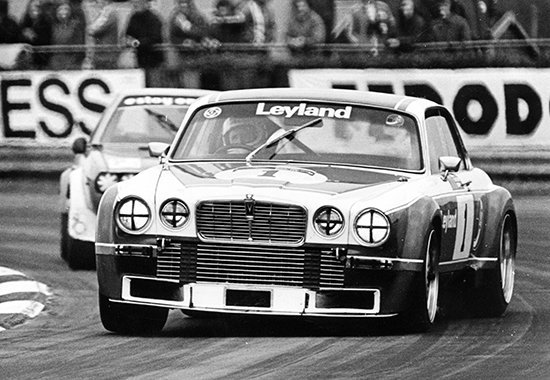 A pair of V12 XJ Coupes were being prepared and raced by Broadspeed for British Leyland in the European Touring Car Championship.

In spite of using top drivers, such as Derek Bell, the cars were not successful in ’76, lacking development.

Sadly after a relatively small number of the beautiful Coupes had been built, Jaguar decided in November 1977 to discontinue manufacture of the short wheelbase shell and concentrate on production of the saloons in the long wheelbase version.

Meanwhile in the USA the V12 E-type was making a big impact on the racing scene.  Bob Tullius, whose team Group 44 persuaded Jaguar that the E-type would be competitive.  Jaguar decided to back Group 44 on the east coast and Joe Huffaker, on the west coast.  The E-types dominated their respective regional championships for two years, breaking the Corvette domination of the series. 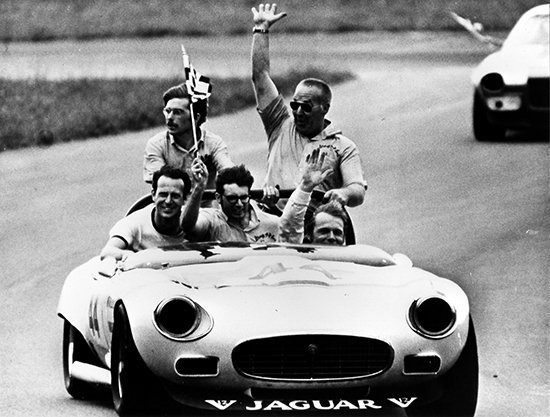 In 1975, Tullius easily won the B Production Championship.  Ironically, the E-type had gone out of production towards the end of 1974 and these racing successes just served to illustrate what an advanced design it had been in 1961.  Arguably the most famous sports car of all time, some 70,000 had been built with around 60% shipped to the States.  US legislation played a major role in the design of the E-type’s replacement which was not a conventional sports car but was rather more of a Grand Touring car. 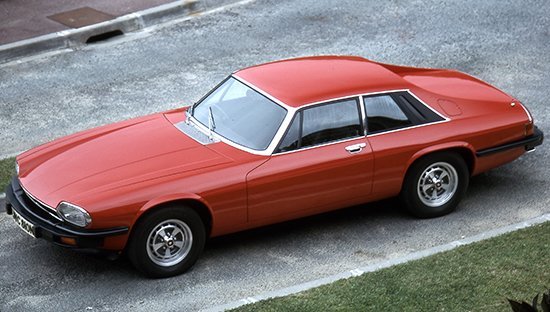 Launched in September 1975 the XJ-S was closely related to the XJ saloons.

While some considered the overall appearance of the new car to be somewhat controversial, no one could argue about its impressive specification.

The fuel injected V12 engine was used and gave the car superb performance.  0-60 mph was achieved in 6.9 seconds with maximum speed of 150 mph.

Group 44 built an example to go Trans-Am professional racing.  A few exploratory outings in 1976 showed the potential and a full season was planned for ’77.  Tullius ended the season as Category 1 Trans-Am Champion.  The following year, with a new lighter car fitted with a 560 bhp engine, Tullius won the last seven races and again took the Championship. 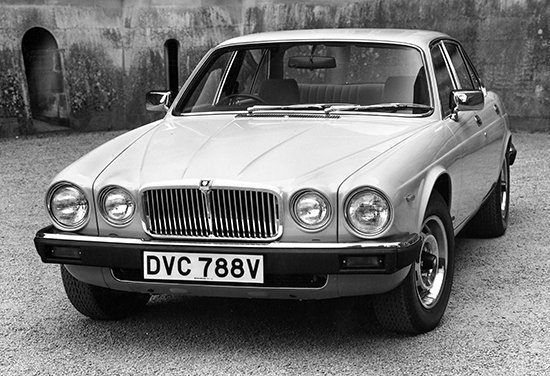 In 1979 the XJ saloons were extensively revised.  The new Series 3 XJ6 range was subtly restyled by Pininfarina with a flatter roofline and a larger glass area giving the car crisper lines.

This, together with improved ancillary equipment had the effect of modernising the car and increasing rear seat headroom.