In 1980 a new era began at Jaguar with the appointment of John Egan as Chairman and Managing Director.  Jaguar’s quality had not been all that it might have been in the late seventies and Egan’s immediate goal was to restore customers’ confidence in the British marque. 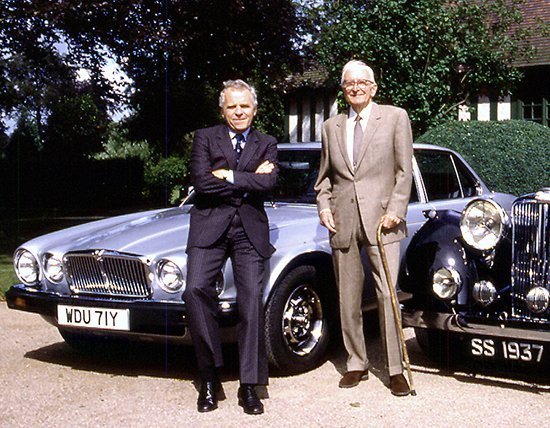 However, fuel crises of the seventies had not helped matters either and in 1981 Jaguar announced new High Efficiency (HE) cylinder heads for the V12 engines.  These were based on principles espoused by Swiss engineer Michael May.  The result was a decrease in fuel consumption which gave the V12 engined saloon and XJ-S a considerable advantage in the more fuel conscious eighties. 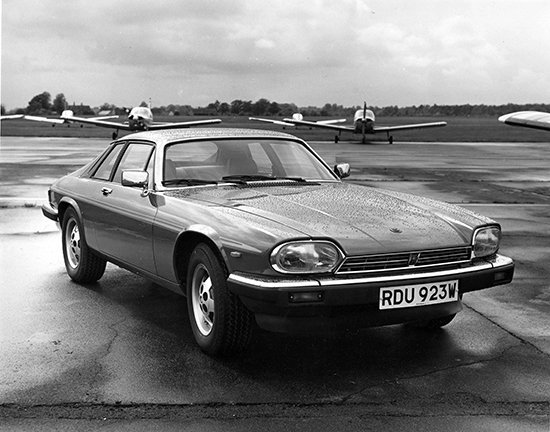 The XJ-S HE was now capable of 155 mph and returning 27 mpg at a steady 56 mph.  Jaguar could claim that the model was the fastest production car in the world, fitted with automatic transmission. 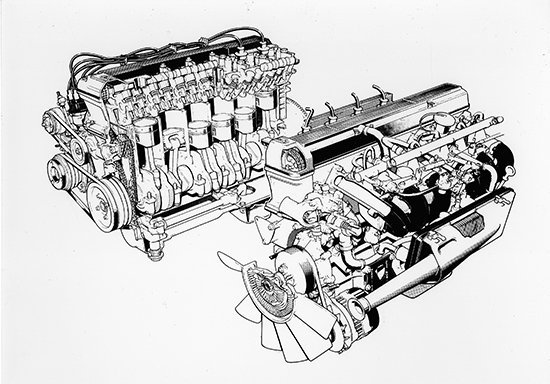 At this time Jaguar was seeking a new six cylinder unit to replace the venerable XK unit.

It had been intended to build a V8 version of the V12, or even a six cylinder by, as it were, chopping the engine in half.  Neither of these courses turned out to be practical and so a completely new design of engine was embarked upon under the guidance of Engineering Director, Jim Randle and Trevor Crisp, Chief Engineer Power Units.

After many experiments, it was decided to offer a new straight six engine called the AJ6 representing an investment of over £21m.  It had a capacity of 3,580 cc and an output of 225 bhp which compared favourably with the current 3.4 litre XK engine which was producing 162 bhp, while being 30% lighter due to the use of an aluminium block.  The AJ6 was first fitted a new version of the XJ-S, the Cabriolet in 1983,  Jaguar’s first open car since the demise of the E-type. 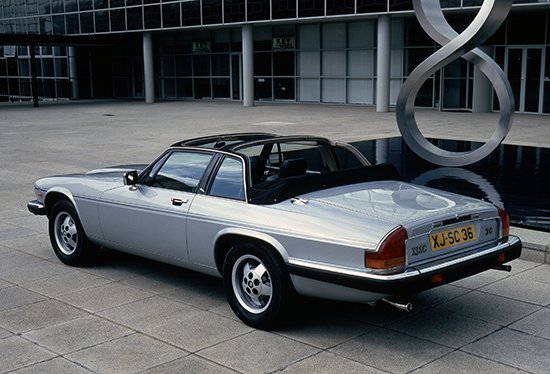 Late in 1982 Group 44 had been given the go-ahead to design and build a sports racing car around the Jaguar V12 engine.  The car was built for IMSA racing in the States.  Named the XJR-5, the car featured an aluminium honey-comb monocoque which employed the mid-mounted engine as a stressed member from which was hung the rear suspension.  A striking fibreglass body was finished attractively in white with green stripes.  The car finished third on its debut at Road Atlanta and won at the same venue in ’83. 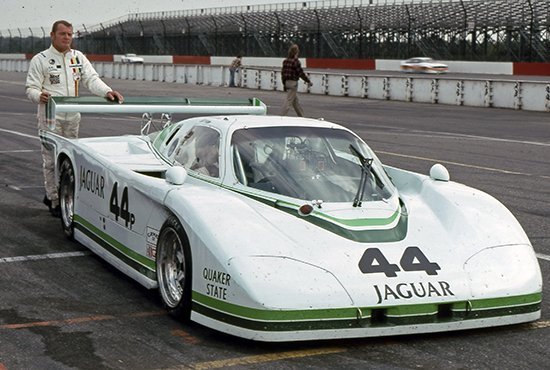 Back in Britain a new force had appeared on the competition scene.  Racing driver, Tom Walkinshaw had prepared an XJ-S for racing in Australia in ’82 and had the idea of building a pair of cars for the European Touring Car Championship.  The first season brought first and second place in the Tourist Trophy Race at Silverstone.  The following year the Jaguars took five wins to BMW’s six. Back in 1966, Sir William Lyons had merged Jaguar with the British Motor Corporation (later to become BL), in the belief that he was safeguarding the future of the company.

The reality was that the company suffered a severe loss of identity and image.  However the Conservative government, elected in 1979, planned to privatise a number of state-controlled companies and in the early eighties Jaguar began to prepare for privatisation.  In August 1984, Jaguar shares were floated on the London Stock Exchange for the first time.  The government was keen to encourage public share ownership – and the share offer was oversubscribed eight times. 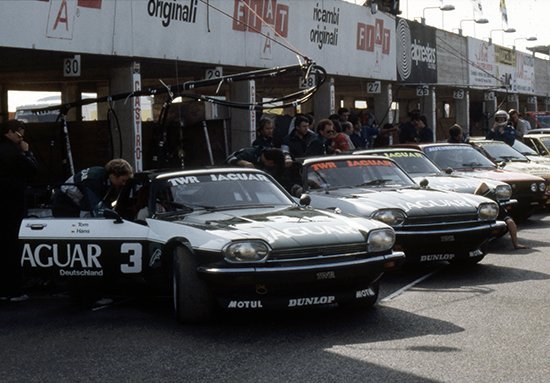 The 1984 season was a good one for Tom Walkinshaw Racing (TWR), who had added a third XJ-S to the team.  The team dominated the European Championship with a string of wins and Walkinshaw ended the season as the European Champion.  Following their emphatic success, TWR were given the task of designing a sports racing car to take on the world and win Le Mans for Jaguar for a sixth time.  Tony Southgate, was retained to pen the new XJR-6. 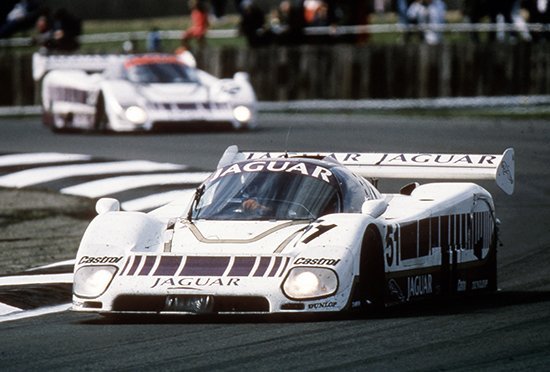 In February 1985 Sir William Lyons passed quietly away at his home, Wappenbury Hall, having lived to see his beloved company returned to independence the previous year.

In July the XJ-S Cabriolet became available with the V12 engine and a few months later the new XJR-6’s made their debut at Mosport Park and finished third.  Group 44 debuted a new XJR-7 at the end of ’85 and in 1986, in front of the home crowd the team managed two fourths and a string of seconds, this consistency rewarding them with second in the Manufacturers’ Championship once again.

Jaguar had been working for some time on a saloon replacement.  The XJ6 was still selling well which meant that Jaguar could ensure the new car would be really right.  Bob Knight had retired at the beginning of the decade and Jim Randle took over responsibility for engineering, designing a completely new suspension for the XJ40. 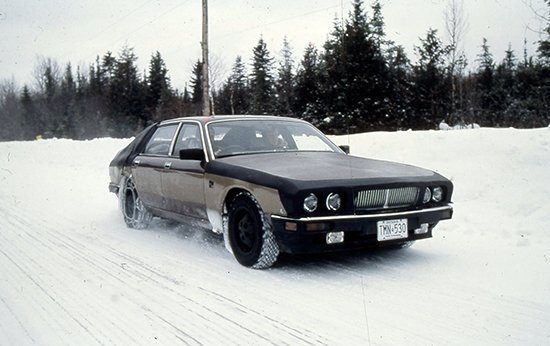 Prototypes were built and tested in every extreme of climate over a total of 5½ million miles.   Launched in Europe in late 1986 and in the States in early ’87, the new XJ6 met with widespread approval, offered with the 3.6 litre AJ6 engine and, in Europe, a 2.9 litre version.  The automatic had a novel gear selector, the brainchild of Jim Randle.  The ‘J’ gate allowed the easy and rapid selection of gears for more lively motoring.  Three model derivatives were offered – the XJ6, Sovereign and, top of the range, Daimler.

The Series III was not to be completely dropped from the range continuing in V12 engined form for certain markets.  It was appropriate that in the year that the new XJ6 appeared, John Egan was knighted for his vital contribution to Jaguar. 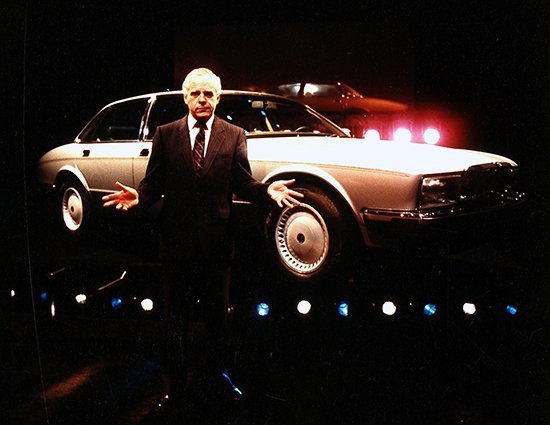 For 1987 the TWR XJR-6 was considerably revised and re-named XJR-8.  The changes were effective for the Jaguars won the first four rounds of the 1987 Championship.  The next round was Le Mans and Southgate produced a body design specifically for the fast French circuit.

Three XJR-8LM’s were entered but luck was not on their side as a puncture and cracked cylinder head eliminated two of the cars and gearbox problems delayed the third.  Round seven brought a first and third places at Brands Hatch, and victory at the Nurburgring in Germany clinched the World Championship for Jaguar who went on to win eight out of the 10 races that year. 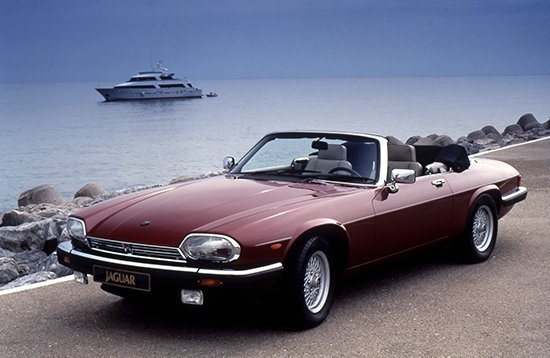 In May 1988, the XJ-S Cabriolet was replaced by a stylish full Convertible with a power-operated hood.  The price for the Convertible was £36,000.  For 1988 the sports racing car was further updated and became the XJR-9.  The IMSA cars were sponsored by Castrol and finished in a very smart green, red and white livery, achieved victory at the first event, the Daytona 24 Hours. 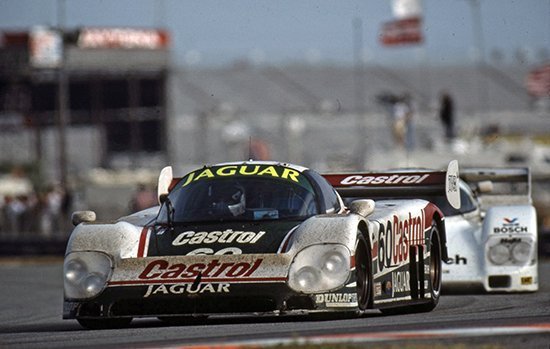 After its flotation in 1984 Jaguar achieved considerable success in the growth and development of its business.  The profitability of the company funded substantial improvements to manufacturing and engineering facilities, and the establishment of a new £52 million product engineering centre at Whitley in Coventry which opened on the May 23rd 1988. 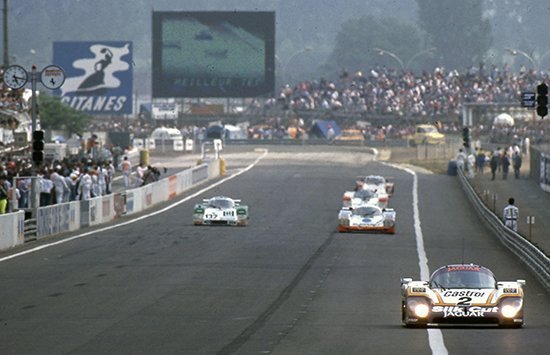 At Le Mans after 24 hours of hard racing the XJR-9LM driven by Jan Lammers, Johnny Dumfries and Andy Wallace crossed the line to add another victory to the five Jaguar have achieved in the fifties.  Martin Brundle and Jaguar finished up, respectively, winners of the Drivers’ and Manufacturers’ Championships.

In 1989 the TWR Jaguars fared rather better in the IMSA series than the World Series.  A pair of the new XJR-12s took the first two places in the classic Daytona event.  The XJR-10 was not fitted with the familiar V12 engine but a twin-turbocharged V6.  Thus TWR developed the XJR-10 for sprint type events but continued to use the V12 engine XJR-12s for the long distance endurance races like Daytona and Le Mans. 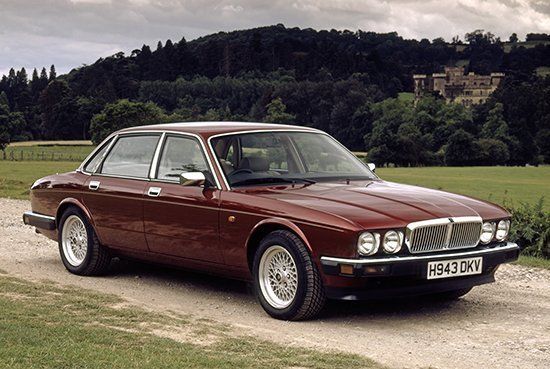 In September 1989, Jaguar announced considerable enhancements to the XJ6 range.  The fundamental change was an enlarging of the 3.6 litre AJ6 engine to 4 litres.

In introducing the new 4.0 litre, Sir John Egan stressed the extent of the changes which resulted in what he liked to describe as a ‘world class car’.