The Cat is Back

At the beginning of 1990 the Ford Motor Company purchased Jaguar and immediately began an investment programme for new models and build methods.  William J Hayden took over as Chairman and Chief Executive.  In 1991 early retirement and voluntary redundancy programmes were introduced which reduced the workforce by a third.  Hayden’s extensive manufacturing experience enabled Jaguar to make significant quality and efficiency improvements during his two years at the helm.  It was a period of great change that created a much sounder company. 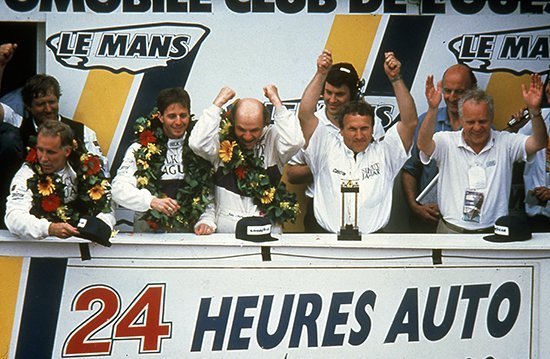 Ford continued to build on Jaguar’s heritage by continuing the firm’s participation in motor sport.  The 1990 racing season could not have started better.  Two XJR-12s were entered for the famous 24-hour Florida classic at Daytona.  At the finish the winning Jaguar, driven by US star Davy Jones, Jan Lammers and Andy Wallace, was four laps ahead of the Jaguar in second place.

The Jaguar racing team went to Le Mans with the XJR12 completing a memorable first and second at the world’s most famous long distance race and the company’s seventh victory.

Jaguar regained the World Sports Car Championship with the revolutionary XJR-14 totally dominating the series which included the Le Mans 24-hour race.  Despite narrowly missing out on victory, Jaguar recorded one of its greatest Le Mans results in 1991 with three V12 engine XJR-12s finishing second, third and fourth. 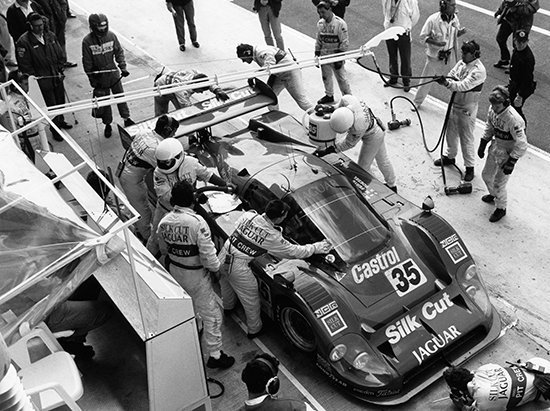 Having made its public debut as a concept car at the 1988 Motor Show the sensational XJ220 became a production reality during 1991.  JaguarSport created a purpose built factory at Bloxham near Oxford for a limited production run of 350 cars. 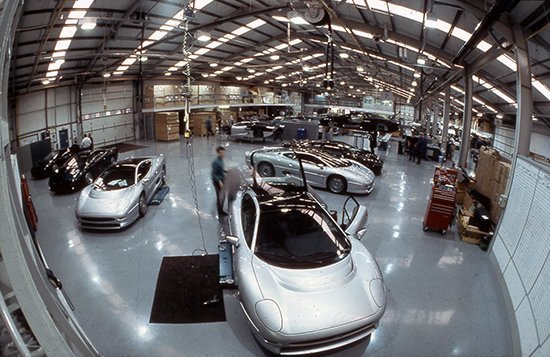 Although no new mainstream production models were introduced during this period, there were many exciting new developments to enhance the existing product range.  The most significant came in May 1991 with a substantial face-lift to the XJS range and the adoption of the AJ6 4.0 litre engine. The following year the XJS range was further extended with the introduction of the 4.0 litre Convertible. 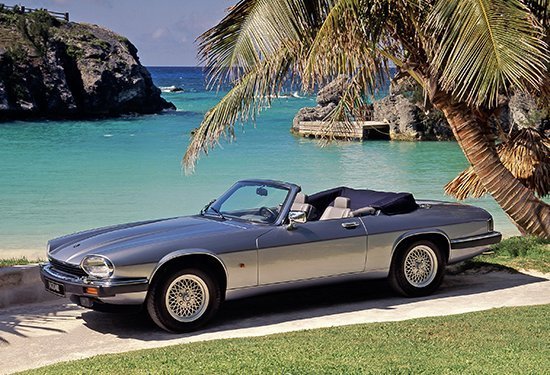 William Hayden retired from the company at the end of March 1992 being succeeded by Nick Scheele.  November 1992 saw the end of the line for two classic models, the Series 3 XJ6 and the Daimler DS420 Limousine.  The completion of the last Series 3 saloon brought to a close one of the longest chapters in Jaguar history – a production run that spanned 24 years and over 400,000 cars, which began with the XJ6 back in 1968.  The new Jaguar XJ12 and Daimler Double Six featured a more powerful, refined and economical 6.0 litre version of the V12 engine.  Extended wheelbase versions of the Jaguar Sovereign, and Daimler saloons called Majestic, were also announced.  The final additions to the saloon range were the XJ6 3.2S and 4.0S.

The XJS range underwent significant changes in specification to strengthen its appeal and competitiveness.  The main changes were the installation of the new 6.0 litre V12 engine, the introduction of a 2+2 Convertible model and the fitment of new moulded bumpers and cast alloy wheels to give both coupe and convertible a more contemporary appearance.

During August 1993 Jaguar installed a new, £8.5 million, assembly line at the Browns Lane Plant replacing lines that had been installed thirty years previously.  The new state-of-the-art facility provided a further boost to quality control and efficiency at Browns Lane, so that both Browns Lane and Castle Bromwich achieved the coveted Ford Quality Standard – Q1.

Jaguar also made another appearance at Le Mans in 1993 with a team of three specially prepared XJ220C’s which competed in the new Grand Touring class.  Sadly the winning Jaguar was disqualified for an alleged technical infringement.

A new XJ Series made its world debut at the Paris Motor Show in October 1994 and the launch of the new car dominated the year for Jaguar.  Code named X300 during its development; the new XJ Series represented an investment of over £200 million and was the first product programme to be delivered by Jaguar since its acquisition by Ford.

It was the first time the company launched a new car, built to world class quality standards, simultaneously in every one of its markets around the globe.  The most striking aspect of the new range was the way traditional and modern styling cues were combined to produce an elegant new body design.  The new 326 bhp supercharged 4.0 litre engine, a first for volume production luxury saloons, ensured that the new XJ was more exciting and appealed to a new range of Jaguar customers. 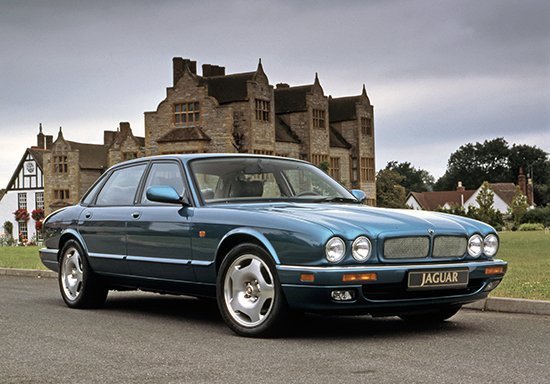 The year was rounded off in fine style when Her Majesty Queen Elizabeth II honoured the company with a visit to the Browns Lane plant in December.

It was the Queen’s first visit to Jaguar since 1956 and it proved to be a memorable day.  She also ordered a new 6.0 litre Daimler in British Racing Green. 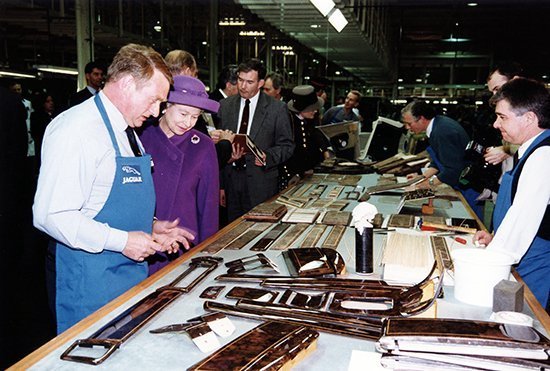 Jaguar began 1995 with sales of the new XJ Series soaring to a five year high.  Jaguar’s product range was further extended in June with the launch of long wheelbase versions of the XJ Series Saloon range.

Having been associated with Daimler since 1960, Jaguar had always been proud that its most luxurious flagship models have been designated “Daimler”.  During 1996 the motor industry celebrated the centenary of motoring and Jaguar marked the anniversary by producing a special commemorative “Daimler Century” model to celebrate the centenary of the Daimler Motor Company of Coventry – the oldest surviving British car marque.

The year also saw the last XJS roll off the production line on 4 April, to be superseded by the new XK8 coupe and convertible models,which made their debut at the Geneva and New York Auto shows early in the year to critical acclaim.

At the heart of the XK8 was an all-new, AJ-V8 engine designed and developed at Whitley.  The 4.0 litre, 290 bhp, 32-valve, quad cam V8 set new standards of refined power for the Jaguar marque – high performance, smooth power delivery and exceptional refinement. 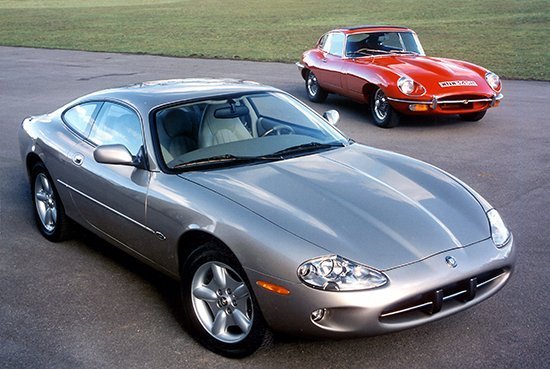 1996 Jaguar XK8 with E-type in background

From the time of its unveiling at the Geneva Show, when it won a “Best in Show” accolade, the XK8 attracted awards and plaudits from around the world for its styling, beauty, performance and handling.  The company won the Manufacturing Industry Achievement Awards “Manufacturer of the Year” award in 1996 and the “Manufacturing Excellence Awards” in 1997.

The company celebrated the 75th anniversary of its founding in 1997.  The last V12 engined saloon was completed in April and the final in-line six cylinder engined saloon in June.  The outgoing six cylinder saloon was replaced by the new V8 XJ Series.  Subtle refinement of the saloon’s lithe, elegant exterior signalled extensive changes beneath the skin.

The Jaguar AJ-V8 32-valve, alloy engine, first introduced in the XK8 had now been introduced in the XJ Series saloon in three forms – 3.2 and 4.0 litre normally aspirated, and an ultra high performance supercharged 4.0 litre, all mated to five speed automatic transmissions.  Jaguar’s Computer Active Technology Suspension (CATS) introduced on XK8, was a standard fitment on supercharged saloon models to provide a unique combination of sports handling and limousine comfort.  The same principles as those used in the XK8 product development process were employed, delivering the new saloon range in just 28 months from programme approval.  A minimum of 80 per cent by weight of each new Jaguar was recyclable. 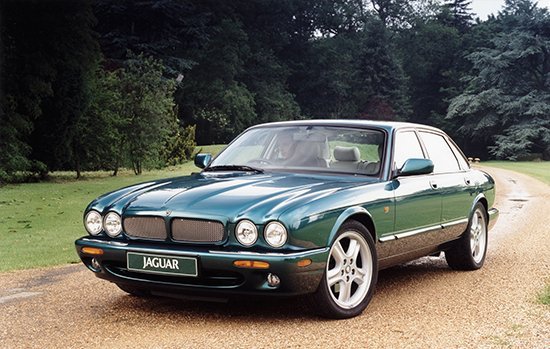 The development of a new facility for the Jaguar Daimler Heritage Trust was announced.   The JDHT Museum, situated at Browns Lane, was officially opened in September 1998.

At the Paris Motor Show in October 1998 Jaguar unveiled a new interpretation of the classic roadster.  Fifty years after the company launched the XK engine and the XK120 sports car; the XK180 concept car was created to showcase the skills and talents of Jaguar designers, craftsmen and engineers.

Although not intended for production, the concept car was based on a shortened version of the supercharged XKR convertible.  The AJ-V8 power unit was modified to produce 450 horsepower and the brakes, wheels and suspension were upgraded to match the engine’s performance.  The XK180 was styled by Keith Helfet. 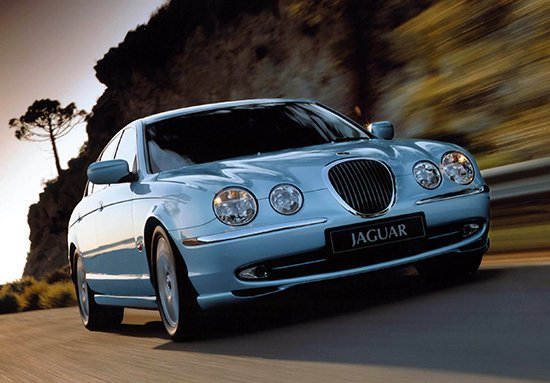 Also in October 1998, Jaguar’s most eagerly awaited new model for decades, the S-TYPE sports saloon, made its world debut at the Birmingham International Motor Show.  The S-TYPE, designed and developed at Jaguar’s Engineering Centre at Whitley and built at the company’s Castle Bromwich plant in Birmingham went on sale in March 1999.

The development of Castle Bromwich to accommodate S-TYPE production represented one of the largest inner city investments in the UK in 50 years, and the largest brown-field site development in Europe.  The total investment for the S-TYPE programme amounted to £400 million, of which around £200 million was associated with the development of the Castle Bromwich site.  The S-TYPE was conceived as an all-new, more affordable, compact, luxury sports saloon to complement and extend Jaguar’s existing range.  Positioned below the XJ Series saloon range in both size and price, the S-TYPE was meant to be a driver’s car in the spirit of its acclaimed antecedents, the Mark II and original S-type. 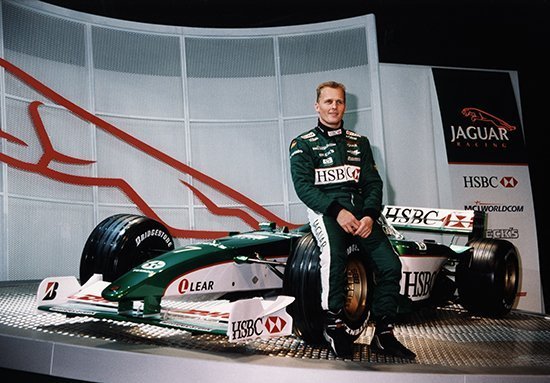 In April 1999, it was confirmed that Dr. Wolfgang Reitzle, would become Group Vice President of Ford’s newly-formed Premier Automotive Group and Chairman of Jaguar Cars Ltd.  Shortly after his own appointment, Dr. Reitzle confirmed Jonathan Browning as the new Managing Director of Jaguar Cars.  At the same time Dr. Reitzle confirmed Mike Beasley as Executive Director responsible for Manufacturing and Engineering.

In October 1999 Jaguar announced its intention to enter the FIA Formula One World Championship. On the day Jaguar announced its arrival in Formula One, it also confirmed that Eddie Irvine would join the team for the 2000 season partnered by Johnny Herbert, Jaguar Racing held a launch for the new racing car – the Jaguar R1 – at a ceremony in London, in January 2000.