Jaguar entered the new millennium with record levels of sales and production, and with the broadest range of products in its history.  The entire organisation had undergone a massive transformation during the 1990’s, so with a globally strong brand image and exciting plans for the future, Jaguar was set on a course for major growth in the 21st Century. 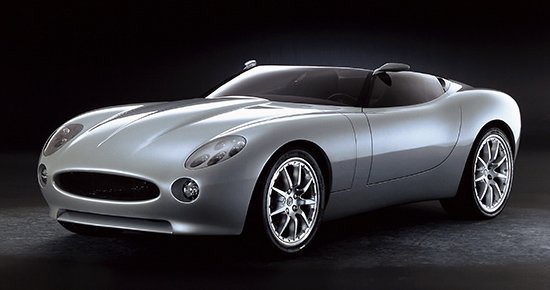 In January 2000, Jaguar’s F-TYPE concept roadster was unveiled at the North American International Auto Show in Detroit.  Design work had commenced under the direction of the Geoff Lawson, Jaguar’s Director of Styling, who sadly died in June 1999.   The project was completed by the new Director of Design, Ian Callum, who viewed the F-TYPE concept as a tribute to Geoff Lawson.

Back in 1998 Jaguar had announced plans for a new, smaller saloon.  Codenamed X400, this new model was to be built at Halewood on Merseyside – which was to become a fully operational Jaguar plant by the time of launch in 2001.  The Halewood plant was built in 1962 and built its last Ford in June 2000.  Jaguar had assumed management responsibility for the plant in October 1999 and the plant underwent a massive transformation with the installation of new manufacturing facilities to support X400 production.  The X400 programme would cost almost £600m. 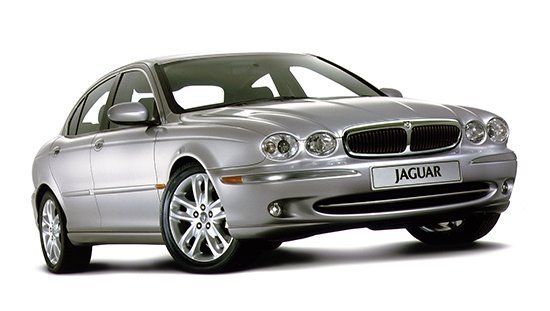 The new model was named the X-TYPE and was billed as the “most significant new model in Jaguar’s history”.  It was launched at the Geneva Motor Show in March 2001.  The launch of X-TYPE signalled not just the launch of a new car, but the hope for a whole new future for the company, establishing Jaguar as a four-model line company competing for the first time in all the key segments of the global premium car sector.  The X-TYPE was offered with transverse V6 engines of 2.5 or 3 litres and 4-wheel drive, and the Halewood plant on Merseyside, home to the X-TYPE, was officially opened in May.

It was at Monaco in May 2001 that the Jaguar Racing F1 Team at last saw some reward for its efforts by clinching its first points of the season and the Jaguar marque’s first ever podium finish in Grand Prix racing.  Eddie Irvine brought his Jaguar R2 home in third place. 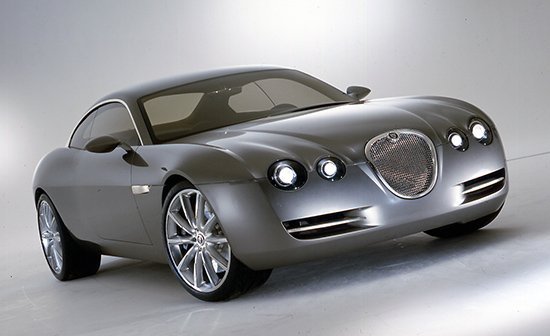 Both combined the sporting and the luxurious, in the tradition that Sir William established as Jaguar’s hallmark, with sleek black metallic paintwork, leather interiors and luxury specifications.  In addition, their performance credentials were highlighted with a series of brand new additions to Jaguar’s growing range of R Performance Options, initially exclusive to the limited edition cars.

Jonathan Browning who had been appointed Managing Director of Jaguar Cars by Wolfgang Reitzle departed at the end of 2001 with Mike Beasley, who had been serving as Executive Director, assuming those responsibilities.  Beasley retired in March 2003. 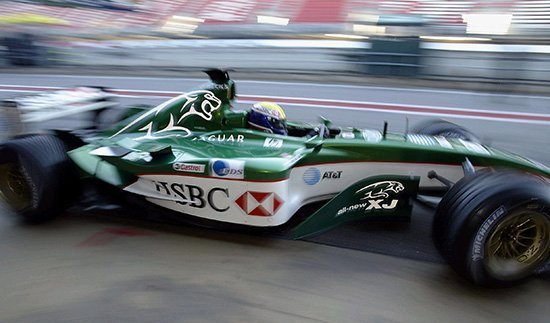 Niki Lauda was appointed manager of the Jaguar Formula 1 team by Wolfgang Reitzle in an attempt to improve on the previous seasons poor results.  Eddie Irvine finished third at Monaco, that was the best result of the season.  The existing F1 Jaguar, the R2, was not fast enough.  The new Jaguar R3 introduced in January 2002 was an evolutionary step in engine development but using a newly designed ‘tub’ that was expected to offer better performance.

Jaguar’s second X-TYPE offering in 2002 introduced front wheel drive with the 2-litre V6 engine.  The combination ensured a price of under £20,000 with improved fuel economy.

Jaguar’s F1 ambitions continued to be frustated with the R3 car presenting problematic handling.  Improvements were made with the result that Eddie Irvine finished third in Italy.  A completely new management team and drivers were recruited so that the R4 car became a turning point in Jaguar’s F1 programme. 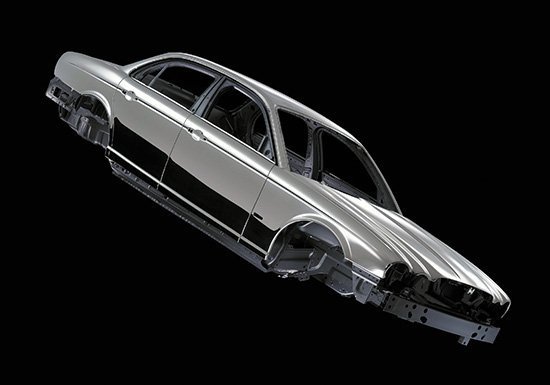 The new XJ X350 range was launched in 2003 replacing the X308 series.  It represented an industrial break through in ‘aluminium body in sheet monocoque’ design; the most “radical Jaguar of modern times”.  While preserving the traditional styling of the XJ line it was completely re-engineered with an all-aluminium monocoque chassis.  The use of aluminium reduced the model’s weight by 40%, increased its stiffness by 60% and so produced dramatic improvements in the vehicle’s economy, ride and handling.

The new 3.0 litre AJ-V6 engine effectively replaced the 3.2 litre V8 and so enabled a revival of the XJ6 badge.

The new V8 SE 3.5 litre engined offering was a new member of the AJ-V8 family, whilst the existing 4.2 litre engine was packaged as the SE, Sport, Super V8 and flagship XJR offering.

In 2003 the X-TYPE became the first Jaguar to be fitted with a Diesel engine to both the saloon and the newly introduced estate, also a first for Jaguar.  Sales peaked at 50,000 units.  While the X-TYPE was Jaguar’s best selling model for vitually all its production run, sales did not meet projections. 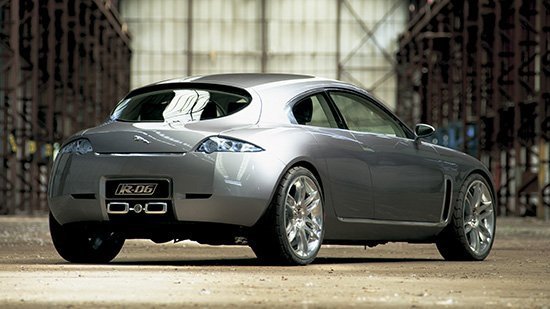 Ian Callum’s second concept car the R-D6 was shown at the Franfurt Motor Show in the autumn of 2003, along with the X-TYPE estate.  The RD6 using aluminium technology, like X350, showcased another new Diesel engine, a V6 of 2.7 litres. 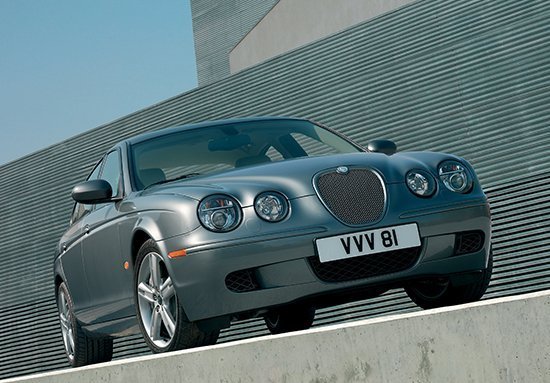 After 5 disappointing years Jaguar Formula 1 had its last season.  Jaguar’s 17 points in Formula 1 for 2003 made them joint 9th in the world championship.  The approach of incremental improvements was still to bear success.  Whilst the Jaguar R5 had been finished by the middle of December 2003 giving a whole month for testing and 2004 saw a stabilisation of results, the team was still unable to challenge for points on a consistent basis.

Ford issued a polite ultimatum as part of a reduction in sport involvement internationally; there was little return of value from the enormous amount of money invested.  Ford chose to sell the operation near the end of 2004 which became the Red Bull Racing Team.

Ian Callum’s Advanced Lightweight Coupé  Concept (or ALC for short) was unveiled at the Detroit Motor Show at the start of 2005 and was to all intents and purposes the replacement to the XK & XKR (X100) models.  The ALC benefited from Jaguar’s advanced lightweight aluminium architecture technology that had been introduced with the X350 offering the same advantages to the vehicle’s economy, ride and handling. 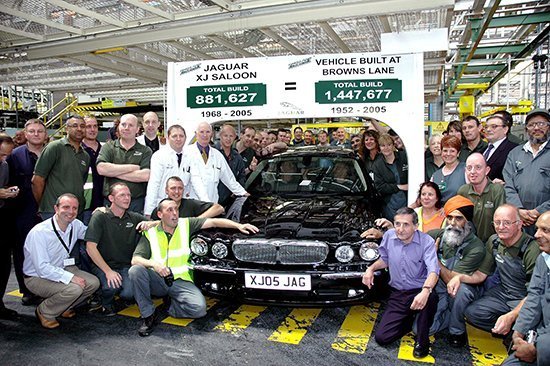 During 2004, the devaluation of the US dollar against the pound meant that the effects of a generally weak economy were exacerbated so that losses rose into the millions.  Saving money became the order of the day and the consequences were severe. 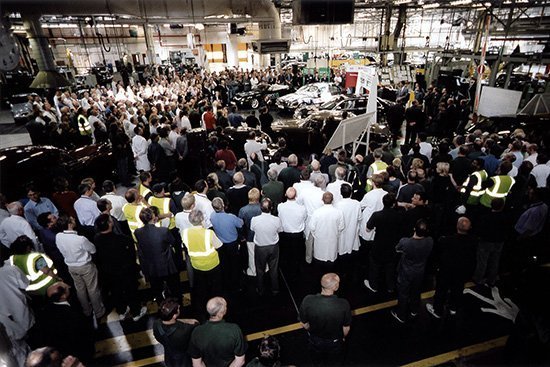 …and the end of production

After nearly 55 years of production at Browns Lane the last cars rolled off its production lines in August 2005.  It marked the end of the XK8 that would soon be replaced by the aluminium bodied XK, to be built at Castle Bromwich, along with the existing XJ.  Some of the most famous cars in the world had been produced at Browns Lane, including the XK120, the C-types and D- types, the Mark II, the E-type, the XJ and XJS.  For many it was and will always be the spiritual home of Jaguar.