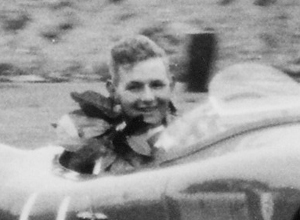 Bill Smith started to race in club events in 1952 at the age of 17 and within 6 months was winning races in his father’s Jowett Jupiter.  By the end of the 1954 season he had totted up four firsts, a third and a fifth using the Jupiter, a Jaguar XK120 and a friend’s Tojeiro.  He was signed to drive for Ecurie Ecosse and caught the eye of the Jaguar team.  He died three weeks before his 21st birthday while racing at Dundrod in Northern Ireland.

Bill Smith was born in October 1934 in Ayrshire, Scotland, the son of a recently qualified doctor.  The family moved south of the border and settled in Lincoln.   Bill  went to Oundle School in Peterborough, the same school as John Lyons, son of William and Greta Lyons, although not in the same year.

His father drove a Jowett Jupiter while his mother preferred large Jaguar saloons and Bill learnt to drive well before he was old enough to hold a driving licence.

Becoming friends with the son of the local garage owner he developed an interest in club racing  and rallying, joining the Eastern Counties Motor Club and the East Anglian Motor Club, becoming a contemporary of Archie Scott-Brown, Brian Lister, Innes Ireland and Roy Salvadori.   His first official event was a club driving test in April 1952 in his father’s Jupiter then two weeks before his 18th birthday he drove the Jupiter to 3rd place in a race at Snetterton, one place ahead of Scott-Brown.

Bill bought an XK120, LBJ 669, off fellow racer John Sarginson taking two 1st places at the ECMC meeting at Snetterton in April 1953.   He failed to finish in the Felixstowe Rally, with Dick Rayner navigating,  in August but returned to Snetterton in June for the 10 lap handicap race for the William Lyons Trophy.  The race was won by Ian Stewart in a Jaguar C-type for Ecurie Ecosse, with Bill finishing 3rd.

In 1954 he raced in an MG engined Tojeiro f0r Eric Ridley collecting five 1st and two 3rd places by the end of the season.  In 1955 he was called up for National Service in the RAF but stationed locally he managed to continue with his racing at weekends. 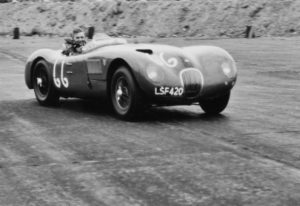 Having driven his XK120 with success, he tried to obtain a racing Jaguar which would make him truly competitive and was allocated one of the new production D-types but was told he was unlikely to receive it until mid year.

On 25th March 1955 an advertisement appeared in Autosport from Ecurie Ecosse offering for sale the 1953 Le Mans winning C-type (chassis XKC051) LSF 420 they had bought from Jaguar.  The arrival of their own D-type meant that the C-type was surplus to requirements.  This was the disc braked C-type which Tony Rolt and Duncan Hamilton had famously taken to victory beating Ferrari and Mercedes.  Bill left his father, John Smith, to negotiate with David Murray and following a successful negotiation it was still in Ecurie Ecosse colours at his first race at Snetterton. 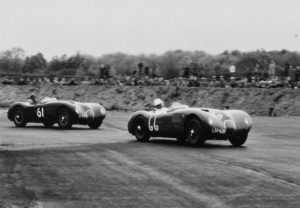 He painted LSF 420 in his own racing colours of bright red with a black centre stripe and took it to Dundrod in Northern Ireland for the international Ulster Trophy in May of 1955.  After a fierce battle with Desmond Titterington in the Ecurie Ecosse D-type, he went on to win the Champion Trophy by crossing the line first, although Titterington won the Ulster Trophy for the fastest finisher.

Bill continued to campaign the car throughout 1955 in other local races and at Snetterton won the William Lyons Trophy in a race for XK120s and C-types (XK120C).  He won other trophies that summer, including one for racing in a friend’s Triumph TR2 and took the C-type to Wicklow in Ireland for the Leinster Trophy race.  He was caught in an accident on 9th July 1955 which killed Don Beauman, driving a Connaught, and pitted to straighten out his dented car.  He eventually had to retire with gearbox problems.

His prowess that season lead to David Murray of Ecurie Ecosse offering him a drive for the 1956 season, with a proviso that if Jaguar wanted him as a Works Driver then he would be released.  Murray also invited Bill to drive in the Targa Florio that October. 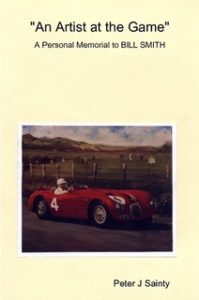 In September Ken McAlpine, who raced for Connaught, announced his retirement from driving and Connaught asked Bill to drive their new Grand Prix car for the 1956 season and asked him to co-drive it with John Young in the September 18th 1955 Ulster Tourist Trophy race at Dundrod.  Bill travelled to Belfast, with his family, for the race.  On the ferry over to Ireland, Bill won the toss to drive first.  The race was started in Le Mans style and included Moss, Fangio and Von Trips in the line up.  The forty nine cars were lined up in order of their engine capacity so Bill in his 1,500 cc Connaught was more than half way down the pack.  The start went off without incident and Bill came past the pits at the end of the first lap in 25th place and then onto his second lap.  Minutes later a pall of smoke arose from the other side of the track and Bill’s Connaught didn’t appear.

Bill driving the Connaught, Jim Mayers in a Cooper and Kretschman in a Porsche came up behind the Mercedes 300SL of Vicomte de Barry in the middle of the road.  Mayers tried to overtake on the right and his Cooper hit a concrete pillar at the side of the road exploding, bursting into flames and killing him instantly.  Kretschman’s Porsche miraculously managed to miss the carnage but he too crashed.  Bill swerved but was unable to avoid the wreckage of Mayers’ car and the Connaught caught fire.  Bill was thrown from the car and a splinter of metal pierced his helmet.  He was taken to hospital but died without regaining consciousness.  He was three weeks short of his 21st birthday.

There was another accident later in the race and Elva driver Richard Mainwaring also died.  The race was eventually won by Stirling Moss in a Mercedes 300SL.  Three deaths in one race put an end to road racing in Northern Ireland so this was the last race at Dundrod.

For more information on Bill Smith consult An Artist At The Game A Personal Memorial to Bill Smith by Peter J Sainty. 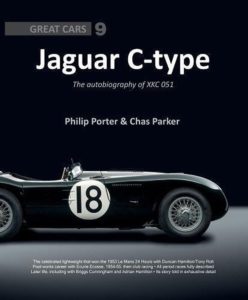 Jaguar C-Type
The Autobiography of XKC051

C-type LSF 420 was sold by the family and continued racing with Geoffrey Allison in his own race colours of white with a central black band, winning one of the first races to be held at Mallory Park in Leicestershire.  Allison sold it on via Miles Brubacher, to Briggs Cunningham’s Californian museum.

There it was discovered, looking sadly neglected, by Duncan Hamilton’s son Adrian, who persuaded Briggs Cunningham to part with it; and now, beautifully restored to its original Le Mans specification and in British Racing Green it is back with the Hamiltons and regularly appears at historic events.

It is also now the subject of its own book ‘Jaguar C-type – The Autobiography of XKC051’ by Philip Porter & Chas Parker.

What Happened To The William Lyons Trophy?

Bill’s family had kept the William Lyons Trophy but never had it engraved with the details of his win.  On the death of his parents the trophy and Bill’s pictures were passed on to his Aunt Nancy who was also the Aunt of Tony Merrygold’s wife Elaine.  Towards the end of 1996, knowing Tony and Elaine’s interest in Jaguars, Aunt Nancy  gave them the trophy with instructions to return it to the sport in Bill’s memory. 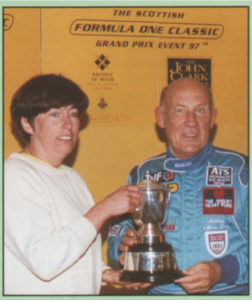 It already had the details of previous winners engraved:  1951 D Hamilton, 1952 H Howorth, 1953 Ian Stewart; 1954 R (Bob) Berry.  Inside the cup was a report from The East Anglian Motor Club dated October 1955 detailing his death at Dundrod.

Having discovered some of Bill’s history and the history of the Trophy, and knowing Bill’s Scottish origins the Merrygolds contacted the Scottish Motor Racing Club for suggestions.  They were running an event on 15th June 1997 at Knockhill Circuit and included on the race card was a ‘Historic Ecosse’ event.  Stirling Moss was going to be at the circuit to give the prizes and Bob Berry (who was on the trophy from 1954) was also expected to attend.  This sounded like the best option bringing together classic racing cars, Scotland and Stirling Moss.  They had Bill’s 1955 win engraved on the trophy and a new plinth made up explaining the history of the trophy and duly took it up to Knockhill.

When it was time for the Historic Ecosse race, Stirling Moss was offered a drive in a Lotus 23 by Tom Wheatcroft, then owner of the Donington Collection.  Despite promising his wife he wouldn’t race and was only there to present prizes, Stirling duly went on to win.  As he clearly couldn’t present the trophy to himself, Elaine stood in and did the honours.  This was followed by an excellent lunch with the man himself before the racing continued for the afternoon.

Elaine’s Aunt Nancy didn’t live to see the outcome but she would have been pleased to know that Bill Smith was back in good company.