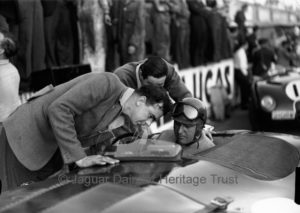 Though he died over twenty years ago, Duncan Hamilton is still remembered as one of motor racing’s most colourful characters and one of Jaguar’s ablest works drivers.

Duncan Hamilton was born in Ireland in April 1920 but the family moved to Britain in 1926 and he was brought up in London.  From an early age he was keen on cars and when he was old enough to drive he obtained an Austin Seven, which he crashed on the first drive.  Undaunted, he had progressed to a Vauxhall 30/98 by the outbreak of World War Two, when he joined the Fleet Air Arm.  Hamilton gained his wings and flew various types including the naval variant of the Spitfire, the Seafire.

Following demobilisation in 1946 he joined the motor trade as a salesman with the Henlys Group, then one of the largest motor dealerships and the biggest distributor of Jaguar cars in the UK.  Like many young men who had seen action during the War he was drawn to the world of motor sport and bought a supercharged MG R Type from Leslie Hawthorn (Mike Hawthorn‘s father).  A Bugatti Type 35B followed and for the 1948 season he raced a Maserati 6CM.  Donald Healey asked Tony Rolt to drive the works 3.8-litre Nash-Healey in the 1950 Le Mans 24 hour race and Rolt asked for Hamilton as co-driver.

They drove the American-engined car into fourth place behind two French 4.5 litre Talbot-Lagos and a 5.4 litre Cadillac-powered Allard.  In 1951 Hamilton acquired a 4.5 litre Talbot-Lago Grand Prix car and he and Tony Rolt drove the modified Nash-Healey at Le Mans to sixth place.  Peter Whitehead and Peter Walker drove the works-entered Jaguar C-type to win.

Meanwhile, Hamilton had bought a new Jaguar XK120 roadster which he drove to third place at the Daily Express one-hour production car event at Silverstone in 1951.  Stirling Moss took first place with a works-prepared XK120 and Charles Dodson second in another XK120.  Out of the 29 cars entered, 11 were Jaguar XK120s and 7 of the top 10 were XK120s.  That year, Hamilton and Rolt finished sixth at Le Mans in a Nash-Healey Coupé.

He also became the first private owner of a C-type (XKC004) registered MDU 214, which he took to the Isle of Man to compete in the British Empire Trophy race.  He was in second place when a bracket in the rear suspension broke forcing him to retire. 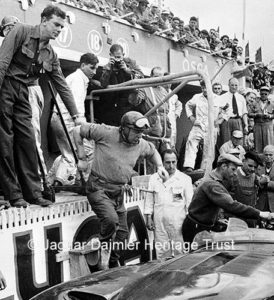 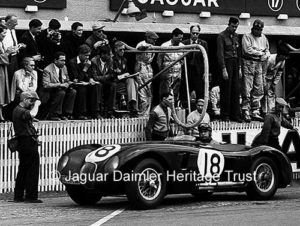 Jaguar had seen the Rolt-Hamilton partnership at work and for 1952 they were invited to join the works team for Le Mans.  However, the C-types had been given new bodyshells with sloping noses and long tails; they did not fare well and serious overheating problems put all three out of the race with Hamilton and Rolt lasting longest on the circuit.

However, Hamilton had his own C-type at Le Mans and he had it sent to Oporto, Portugal, where he drove it in the Grand Prix but had to retire due to mechanical problems.  Later that year he drove the C-type at Goodwood and elsewhere in the UK but without winning any events, although he was second to Moss at the International Daily Express meeting in August. 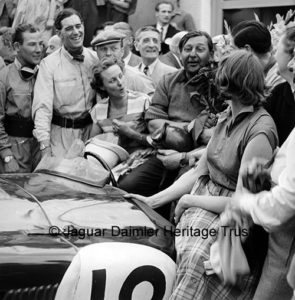 For Le Mans 1953, Jaguar fielded a team of three C-types, with thin gauge lightweight bodies, Dunlop disc brakes and Weber carburettors.  By the end of the first hour Stirling Moss and Peter Walker were in the lead, then Hamilton and Rolt took over and, apart from a short period, they stayed in front for the remainder of the race.  Lofty England had laid down some strict lap times for the team and following these Hamilton and Rolt gave Jaguar a Le Mans win in the Coronation year.

That same year Hamilton drove his C-type once more in Portugal and shared Peter Whitehead’s C-type in Italy before returning to race at Goodwood with the work’s team; here both Hamilton/Rolt and Moss/Walker retired leaving Whitehead and Stewart to survive and take third place.  By now the C-types had reached the end of their racing career with Jaguar and made their final appearance at Dundrod in Northern Ireland; they were plagued with gearbox problems and none of the C-types finished the race.

However, Hamilton continued to champion the C-type, now with the replacement XKC038, which he drove at Oulton Park to fourth place, a win in the Coupe de Paris at Montlhéry and a win at the first race held at the new track at Aintree, Liverpool.

Jaguar entered the new D-type for the 1954 Le Mans 24-Hours Race with Hamilton/Rolt, Moss/Walker and Peter Whitehead and Ken Wharton as drivers.  Unfortunately, the cars suffered engine misfire problems which were cured but Moss/Walker and Whitehead/Wharton had other problems and retired, leaving Rolt and Hamilton driving in torrential rain.  It was during this race that Ferrari breached several rules during a pit stop and went on to win with Hamilton coming in second.  Jaguar was urged to lodge a protest against Ferrari but Lyons decided against it as he felt Jaguar should win ‘on the road or not at all’.

Hamilton took to the D-type and after Le Mans he drove with Rolt as one of three works-entered D-types at the Reims 12-Hours race.  This winning D-type was driven by Whitehead and Walker but despite being shunted by Jean Behra, Hamilton and Rolt secured second place.

Their D-type had been badly damaged by Behra – a sub frame member had punctured the differential casing – but despite the noisy rear axle they managed to finish the race.

In January 1955 he bought his first D-type (XKC402) registered OKV 1 and first raced it at Agadir, Morocco in February 1955, but retired with gearbox problems.  The car was repaired and he entered the Dakar Grand Prix, which was always a trial to any car.  Hamilton drove the D-type hard and fast, achieving a top speed on the straight of around 180 mph and finished in third place.

Hamilton and Rolt were selected once more for the 1955 Jaguar works team and drove the long-nose D-type at Le Mans.  They retired after their car lost its first and second gears and it was left to Mike Hawthorn to win the unhappy race that year.  The race partnership was broken-up when Tony Rolt retired from racing at the end of the 1955 season to pursue his business interests, which included work with Harry Ferguson on a four-wheel drive system.  Lofty England teamed Duncan Hamilton with Ivor Bueb for the 1956 Sebring 12-Hours race, in which four D-types were entered jointly by Jaguar and Briggs Cunningham.  Unfortunately, the works Jaguars did not win – Hamilton and Bueb retired with overheating brakes – and it was Ferrari that took the first two places.

Later in the year, Hamilton drove OKV 1 to win the Coupe de Paris at Montlhéry and returned home to drive one of the new Jaguar 2.4-litre saloons to third place in the Touring Car race at Silverstone.  A few weeks after this race, Hamilton was in Belgium for the race at Chimay, where he drove his D-type to second place.  He was unlucky with a works D-type at the Nürburgring 1000 km race in which he was partnered by Paul Frère.  Unfortunately during practice Frère crashed the car and the replacement which was sent from Browns Lane fared no better; after just five laps of the race Frère experienced gearbox trouble and had to retire the D-type.  Hamilton did not get to drive in the race.

While driving a D-type at Snetterton in September a tyre burst as he was about to cross the finishing line.  He said it was the only race he could remember  winning while pointing the wrong way…..

Jaguar entered three D-types for the 1956 Reims 12-Hours race with Frère/Hawthorn, Desmond Titterington / Jack Fairman and Hamilton / Bueb driving.  The D-types dominated the race and as it drew to a close the three leading cars were Frère / Hawthorn, Hamilton / Bueb and Titterington / Fairman.  They were signalled by England to hold position and cross the finish line in that order but Hamilton could not resist speeding up to set a new lap record and in doing so overtook Paul Frère coming in first.  England was not pleased and while Hamilton tried to make light of the fact that he ignored a team order, Lofty England sacked him on the spot.  Jaguar could not have someone who treated the business of racing in such a cavalier manner, Hamilton was out, though he and England remained friends.

Without the safety net of Jaguar, Hamilton went on his own to Le Mans in 1957 with an ex-works 1956 D-type (XKD601), which he bought and had fitted with a 3.8-litre engine.  Driving in partnership with Masten Gregory they experienced electrical problems and a burnt floor caused by a fractured exhaust pipe.  Hasty repairs were carried out, including a new floor, and they finished sixth.  Hamilton continued to champion one of his D-types at different venues, including Le Mans in 1958 (the car had a 3-litre engine installed); his co-driver was Ivor Bueb and though they led at some stages they were destined to remain in second place, behind a Ferrari, for much of the race.  Heavy rain on the Sunday caused problems for several of the cars and one, a DB-Panhard had to be abandoned in the middle of the road.  Poor visibility meant that Hamilton did not see it until he was almost on top of the Panhard; he tried to avoid it, swerved and braked, the D-type spun into a bank and overturned into a ditch.  Hamilton was bruised but not badly hurt, but he was out of the race.  The D-type was repaired and he drove at Silverstone, Mallory Park and in the Goodwood Tourist Trophy Race (with Peter Blond as co-driver) in September 1958 to sixth place.

This was Hamilton’s final race and early the following year he announced his retirement from racing. 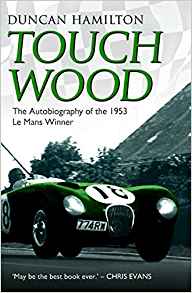 If you want to know more about Duncan Hamilton – buy his autobiograpy – Touch Wood.

Duncan Hamilton was one of the real characters in motor racing that only Britain seems to produce; he drove hard and fast and lived life to the full, he enjoyed a good party and loved meeting and talking with friends in and out of the motor business.  He spent his years away from the circuit running a motor business and sailing whenever he could.

In 1970 he retired to Somerset where he carried on sailing and entertaining.  His health started to deteriorate and he suffered some heart problems, then early in 1994 he was diagnosed with cancer of the lung (he was a lifelong non-smoker).