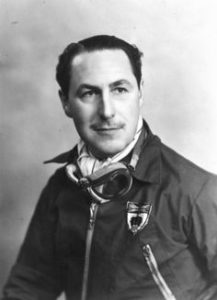 Jack Fairman, born in March 1913, studied automotive engineering, test drove as part of his day job and developed a passion for racing in his early twenties.  Together with Stirling Moss he contributed to Jaguar’s 1st Le Mans success in 1951.  He was one of the four drivers on the Montlhéry 7 day record breaking Jaguar XK120 drive in 1952 and went on to race D-types for Jaguar Cars and the Scottish, Ecurie Ecosse team.  He participated in 13 Formula One Grand Prix and scored a total of five championship points, all in the 1956 season.

This article only deal’s with Jack Fairman’s time driving Jaguar cars, and related events, and is not meant to be an exhaustive review of his whole life and career.

Born in Smallfield, near Horley, Surrey, Fairman was educated at Reigate grammar school.  Having evaded a career in the family laundry business, he studied at Chelsea’s Automobile Engineering Training College, and then joined Daimler in Coventry as a fitter.  It was here, and later at Armstrong-Siddeley, that he began to establish his reputation as a test driver.  He was an ‘improver-fitter’ in the Daimler service department where he developed his analytical skills, and was one of only two Daimler employees trusted to test drive the Royal Double-Six (V12) cars when they were overhauled.  The sleeve-valve engines were known as ‘Silent Knight’ and Fairman recalled that ‘if you opened the bonnet and went right up to it, the only audible sound was the almost imperceptible tick as the ignition points opened and the faint breathing of the carburettor.’

One day he was stopped by the Coventry police while test driving a 40 hp Double-Six because it had no number plates fitted.  It was the King’s car.

Fairman was still working at Daimler’s Coventry works in 1934 when he first competed in trials and hill climb events in an Alvis 12/50.  He then moved on to races at the Brooklands circuit, but when World War II came he spent the duration serving his country, first in an anti-aircraft battery before joining the Royal Tank Regiment and taking part in the Normandy invasion.

After the war, Fairman achieved many successes in sports racing, especially in endurance events.  During this time he drove for a number of top-rank teams including, Bristol, Jaguar, Ecurie Ecosse and Aston Martin.

Fairman’s first Le Mans outing was in 1949 sharing the driving with Eric Thompson finishing eighth in an HRG.   Although he entered for Le Mans in 1950 he didn’t get to drive as the Aston Martin, he shared with Thompson, retired with engine problems on the 8th lap.  In 1951 Fairman and Stirling Moss were paired for Le Mans 24 Hours, driving for Jaguar Cars, and their role was to act as ‘hare’ leading the pace as much as possible in order to break the pursuing ‘hounds’.   Stirling Moss quickly went out into the lead, which he held for 7 hours, including setting fastest lap, but just before midnight and after 92 laps the car lost oil pressure and the engine failed.  However they had done their job and Peter Walker / Peter Whitehead inherited the lead and went on to win Jaguar their first Le Mans race, 9 laps ahead of the 2nd placed Meyrat and Mairesse in a Talbot-Lago.

His only other Jaguar race in 1951 was a DNF driving Jack Broadhead’s XK120 at the September Tourist Trophy race at Dundrod, which was won by Stirling Moss in a C-type.  He drove Broadhead’s car again in the Silverstone International meeting in May 1952, finishing 14th.

He wasn’t involved in Jaguar’s failed attempt at Le Mans in 1952 with their modified C-types, as he was driving for Allard, but Leslie Johnson roped him in for the Montlhéry record attempt in August 1952. 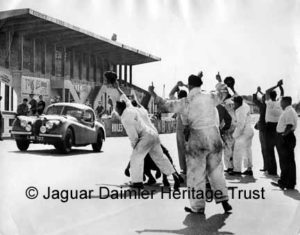 Johnson had persuaded engineer William Heynes to release a car from the Experimental Department – a bronze coloured XK120 FHC.  This was the second right-hand drive coupé made, LWK 707 and was fitted with long range fuel tanks to minimise the number of stops, an additional windscreen wiper to improve visibility when high on the banking and a two way radio.  This specially prepared car was taken to Montlhéry near Paris and was driven for seven days and seven nights at an average speed of 100.32 miles per hour, including all stops.  The four drivers were: Jack Fairman, Stirling Moss, Bert Hadley and Leslie Johnson and it seems that Jack took it upon himself to do his best to relieve the inevitable boredom of driving round and round an oval track. 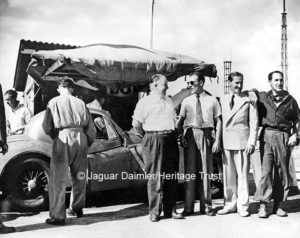 Stirling Moss recalled:
“…in mid-summer Leslie Johnson had another of his ideas.  Having averaged 100 mph for 24 hours at Montlhéry he now talked Jaguar into attempting 100 mph for a week!…We again drove in three-hour spells.  The speedbowl lap was under a minute at 120 mph, so it was quite a strain.  After each straight we hit the banking high up near the lip, then plunged off, twice every fifty seconds, night and day.  In each spell we would cover about 2,000 laps.  It was impossible to keep one’s mind occupied on a job like that.  We had a two-way radio which helped keep boredom at bay.

We hit several hares, rabbits and birds, and Leslie swore at one point that he’d seen a huge ten-foot tall figure in a long cloak, wearing a tall pointed hat, striding toward him along the verge.  Next time round the figure had gone…it worried the life out of him for the rest of his stint.  In fact I (Stirling Moss) had donned a Shell fuel funnel, pulled a tarpaulin around me and sat on Jack Fairman’s shoulders as he strode along the verge.  After Leslie had whizzed by we ran away and hid…All very childish, but good fun in the circumstances. 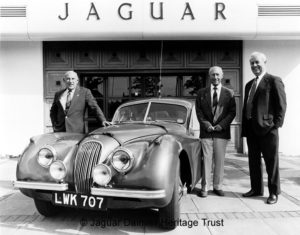 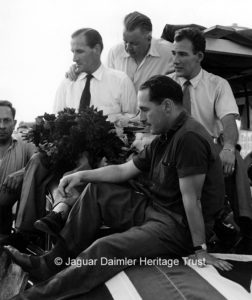 Later, I came whistling off the banking to find Jack Fairman sitting with Leslie Johnson in the middle of the track, playing cards!  Then they took the pit signal board and put it out on the track, so that my natural line past the pits took me between it and the timekeeper’s hut.  Leslie was lounging beside the hut so I waved to him as I shot though the gap.

Next time round the board had been moved closer to the hut.  The gap was narrower, but I couldn’t leave the fast line so I shot through it again.  Next time round, he’d moved the board closer still.

Each lap he narrowed the gap which made me concentrate harder to pass through it.  Eventually he gave in, and the board went back to its proper position, hung on the tent.  At least it passed the time…”

This XK120SE LWK 707  is now with Jaguar Daimler Heritage Trust and in 1992 Moss and Fairman were reunited with the car at Brown’s Lane with Managing Director, Nick Scheele.

For most of 1953 and 1954 Fairman raced for Bristol with a single Jaguar race in Joe Kelly’s C-type at the Dundrod Tourist Trophy in September 1953, finishing 7th.  He was involved with the development of Connaught’s Formula 2 and Formula 1 cars and put in the occasional Grand Prix start, usually in the British and Italian Grand Prix, making his debut at the British Grand Prix in 1953 with an HWM-Alta.

He signed to race D-types for Jaguar in 1956 but not starting well, with a DNF at Silverstone in May.  Things improved in June coming 3rd with Desmond Titterington at Reims, where Jaguar took all of the first 4 places.   Jaguar entered 3 D-types for Le Mans, which was in July in 1956, and Fairman was paired with Ken Wharton.  Sadly he was involved in a spin on lap 3 and was hit by De Portago’s Ferrari.  Although he managed to get the car to the pits, the damage was too severe to continue and they had to retire.  This race saw the first Le Mans entry for David Murray’s new Ecurie Ecosse team whose D-type, driven by Ninian Sanderson and Ron Flockhart, won the race.  While not a good race for Fairman this was Jaguar’s 4th Le Mans win, cemented by the Equipe Belge D-type driven by  Jacques Swaters and Freddy Rousselle, coming in 4th and Jaguar Cars’ own entry, driven by Mike Hawthorn and Ivor Bueb, finishing 6th.

Fairman signed to race for Ecurie Ecosse for 1957 and 1958 putting in some solid performances but not finishing any higher than 7th for them.  Fairman took part in the ‘Monzanopolis’ – Race of Two Worlds on 23 June 1957 which pitted US Indianapolis type cars against European Sports and Formula One Grand Prix cars on the banked circuit at Monza, Italy which had been re-developed in 1955.  Most of the Formula One teams boycotted the event with only 1 Ferrari, 2 Maseratis and 3 Jaguar D-types entered.  The Ferrari and Maseratis had problems with tyres and handling during testing and withdrew from the event, leaving Ecurie Ecosse’s D-types as the only European entries.

Despite making a quick getaway and leading the first lap in one of the Ecurie Ecosse D-types, they were quickly overtaken  and American Offenhauser powered cars took the first three places.  The D-types of Fairman (XKD603), Lawrence (XKD606) and Sanderson (XKD504) taking 4th, 5th and 6th places.

Ecurie Ecosse entered a team for the 2nd running of the Race of Two Worlds on 29 June 1958 with Fairman driving a Jaguar engined Lister and Masten Gregory and Ivor Bueb driving D-types.  Fairman retired at the end of the second stint, Gregory retired during the final stint after 44 of the 63 laps with Bueb finishing in 7th (last) place.

In 1959 Fairman joined David Brown’s Aston Martin team and as Moss’ co-driver, he won twice.  In one instance, while leading the Nurburgring 1,000 Kms it began to rain and on his sixth lap, slowed by another car, he lost control and spun into a ditch.  As he wasn’t allowed any external help, he managed to push the car back onto the track, denting its rear in the process.  Upon returning the muddied DBR1 to the pits, Moss returned to the race and overhauled a couple of Ferraris to win by 41 seconds.  In September, partnered by Moss and Carroll Shelby he won the Tourist Trophy race which that year was at Goodwood.

He continued with his Formula One career and in 1961, he was the last man ever to start a Grand Prix with a front engine car and the first to drive a four-wheel drive car at the British Grand Prix.  Run by the Rob Walker Racing Team, the car in question was designed by Ferguson Research Ltd (where ex-racing driver Tony Rolt was now working), the experimental Ferguson P99.  Unfortunately Fairman’s race ended when his teammate Moss was disqualified after suffering from brake failure in his Lotus 18, taking over the 4WD machine in Fairman’s stead. 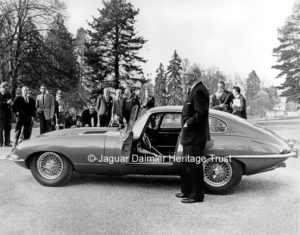 In 1963 Fairman scored seventh place driving a Porsche, in his last Formula One race, the non-Championship Imola Grand Prix.  He then focused on running the family precision tool company.

Fairman’s interest in Jaguars continued beyond racing them.  On 28th June 1965 he bought an E-type for his own use – 9600 HP, the first E-type FHC which had been unveiled in the Parc des Eaux Vives in Geneva in March 1961, and driven by Bob Berry for the press drives at Geneva.  The car continued with a busy PR life but as was generally the case with Jaguar once it had finished its PR duty it was moved on through the trade.

He tried, unsuccessfuly, to sell it on in December 1965 but kept it for about another year before selling it on to another dealer, Richardson’s in Pease Pottage Sussex, who specialised in sports cars. 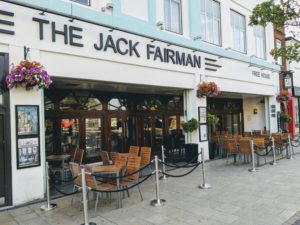 In 2007 in his birthplace of Horley in Surrey, the pub chain Wetherspoons opened “The Jack Fairman”.  This was built on the site of the Fairman family car showroom, built in 1933.