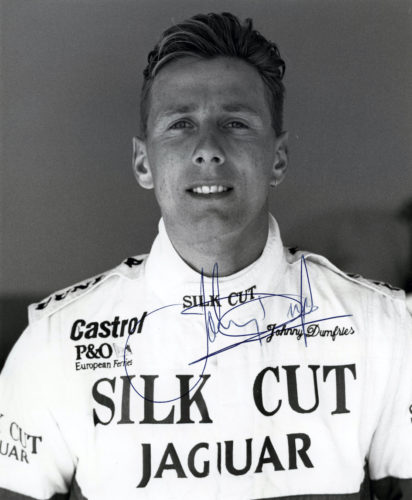 The Jaguar Daimler Heritage Trust were saddened to learn of the death of Johnny Dumfries aged 62 on 22nd March 2021 following a brief illness.

We are grateful to Simon Arron of the Guild of Motoring Writers (of which Johnny Dumfries was an Honorary Member)  for this obituary.

Johnny Dumfries earned his place in Jaguar legend when, aged 30, he was one of the team of drivers, with Jan Lammers and Andy Wallace, who took the Jaguar XJR-9 to victory in the 1988 Le Mans 24 hour race.  Jaguar’s first outright victory in the event since 1957.

In 1986 he joined Lotus as second driver to Ayrton Senna.  Such are the facts the wider world knows about the career of Johnny Dumfries, who has died at the age of 62, but such simple statistics do him a disservice.

Johnny Dumfries’s ascent to the motor racing summit owed nothing to his aristocratic background, something he kept well hidden when he was racing in the cut and thrust of Formula Ford during the early 1980s. It was the result of hard graft – working as van driver, painter & decorator, among other things – and natural competitive flair.

By 1983 he had progressed through Karting and Formula Ford, showing sufficient promise to graduate to the British F3 Championship, running a one-year-old Ralt on a shoestring budget with the small AMR team.  He obtained a number of strong results, though he failed to finish on the day that really raised his profile.

At Silverstone in June 1983 there was a race counting towards both the British and European championships.  Dumfries qualified third, behind UK title protagonists Martin Brundle and Ayrton Senna, and made a better start than the Brazilian to run second initially.  His hopes of a podium result detonated along with his engine, but a marker had been laid.

That winter, BP recruited him to drive for its F3 team in 1984 and, at the wheel of a Ralt run by David Price, Dumfries won 10 of the 17 races to emerge as runaway champion.  And even though he missed a couple of races due to date clashes, he also finished second in the European series, only six points behind winner Ivan Capelli.

Despite this stellar campaign, a shortage of sponsorship compromised his chances of graduating to the FIA F3000 Championship, Grand Prix racing’s unofficial finishing school.  He found support to do the first five races in an Onyx March, finishing sixth at Vallelunga, and later did a couple of events in an uncompetitive Lola, but it was a frustrating campaign.

Even so, he was offered an F1 chance with Lotus the following season.  Derek Warwick was expected to get the drive, but team leader Ayrton Senna didn’t want an experienced F1 driver in the second car and Dumfries seized the opportunity that came his way.

His season was hindered by unreliability – and his clear role as the team’s number two – but he managed a couple of points finishes, though by then he already knew he would not be staying beyond the season’s end.  Lotus had done an engine deal with Honda, whose preferred driver Satoru Nakajima came as part of the package. 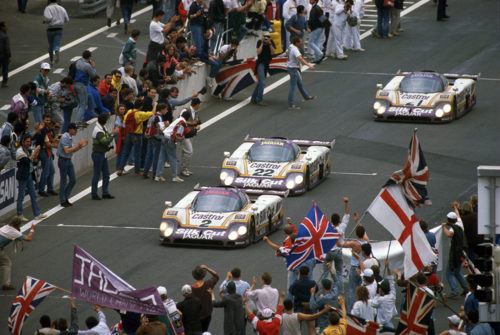 Afterwards, Walkinshaw suggested Dumfries should give him a call – and that led to the offer of a full-time drive, the highlight of which would be that Le Mans victory in June 1988.

Dumfries raced for Walkinshaw’s works Jaguar team , now liveried as  ‘Silk Cut Jaguar’ for the whole of the 1988 season, normally partnered by Jan Lammers or Andy Wallace.  Although there were seven DNFs, they scored one 2nd, two 3rd, one 4th one 8th and of course their most important result was winning the Le Mans 24 Hour Race in June partnered with both Lammers and Wallace.

It was Andy Wallace who drove the XJR-9 over the finish line, with the two other XJR-9s in line behind.  Tom Walkinshaw later admitted in a TV interview that they weren’t just lined up for a photo-call.  The lead XJR-9 Car #2 had developed gearbox problems and was stuck in top gear for several laps. Walkinshaw gave instructions to the other drivers that if anything happened they were to push Car #2 over the line! 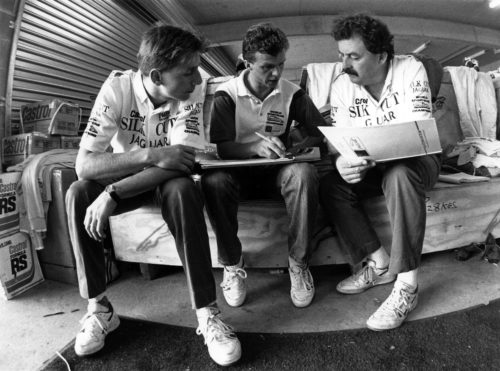 A mistake on the opening lap at the September 1,000 km race at Nürburgring persuaded Walkinshaw not to retain his fellow Scot for the following season.

Dumfries switched to Toyota’s sports car programme for the next two years – 1989 & 1990, but with no deal on the table for 1991 he decided to hang up his helmet and start a fresh life helping to manage the family estate of Mount Stuart on the Isle of Bute.

His only race in 1991 was at Le Mans for Courage Compétition driving a Cougar C26S-Porsche with Anders Olofsson and Thomas Danielsson, retiring with engine failure after 45 laps.

He returned to Le Mans in 2003 for the testing in April driving a DBA 4-03S for RN Motorsport, with John Nielsen and  Hayanari Shimoda – finishing 14th, although he didn’t drive in the 24 hour race in June.

In 1993 he became the 7th Marquess of Bute when his rather died and he concentrated his efforts on the family estate, opening the house to the public in 2005 and turning disused cottages into holiday homes.

He is survived by his second wife Serena (Wendell) and their daughter Lola, the three children from his first marriage. and two stepchildren.

I’ll [Simon Arron] remember him as grounded and friendly, someone whose background I would never have guessed as we sat chatting over egg and chips in the ramshackle café that once sat to the outside of Silverstone’s Woodcote Corner.  He won’t ever be listed as one of the all-time greats, but his 1984 season underlined significant potential that would remain ever unfulfilled.

He was a good bloke, taken far too soon.