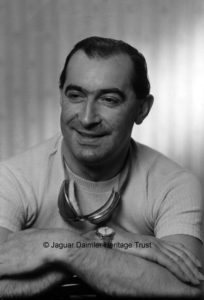 Frederick Charles Kenneth Wharton, born in Smethwick on 21 March 1916, was a British racing driver who raced in both sport cars and single-seaters, competing in off-road trials, hill-climbs and rallying at which he excelled.  His racing career started at the age of 19, when he competed at Donington Park in an Austin.  As a motor engineer, he built his own ‘specials’ in his Ford dealership in Birmingham, using them for trials and hill-climbs.  In his Cooper-JAP he raced in 500 cc Formula Three events, winning at Zandvoort.  Out of the 15 World Championship Grands Prix he participated in, he scored 3 championship points.

A contemporary of Hamilton, Moss and Whitehead, he drove for Jaguar in 1954 and 1956 racing at Le Mans, Reims (winning with Peter Whitehead) and Dundrod, and conducting tyre tests at Reims on Jaguar’s experimental car XP/11.

He died in January 1957 while driving a Ferrari Monza in the Grand Prix at Ardmore near Auckland, New Zealand.

His start in racing wasn’t very auspicious when on 17 August 1935, (aged 19) he overturned his Austin Seven at Redgate corner at Donington Park during the first lap of an 850 cc race.  Fortunately he escaped with only minor grazes to his arm and both his driving skills and results improved considerably over the years as he competed in sprints, hill-climbs and raced at Brooklands.

Wharton beat Stirling Moss at one of their first encounters when on 25 July 1948, he drove his supercharged 750 cc ‘Wharton Special’ up the 440 yards (402 metres) hill-climb at Great Auclum in Berkshire, organised by the Hants & Berks Motor Club.  He made FTD  (Fastest Time of Day) in 23.34 sec., beating Stirling Moss’ 23.46 sec.  In 1950 Wharton, in Peter Bell’s supercharged 2-litre ERA, competed against Moss’s HWM in the race for cars over 1,500 cc and up to 2,500 cc.  Despite the ERA having more power, with two laps to go, Wharton experienced gearbox problems and had to retire, leaving Moss to score a win.

In 1951 he travelled through Europe hill-climbing and racing.  He finished in third place in the Susa/Mont Cenis hill-climb and fourth in the Aosta/Grand Saint Bernard hill-climb, both in Peter Bell’s 2-litre ERA.  At the German Freiburg hill-climb, a 500 cc event of over 20 laps, Wharton was runner up to Moss who was in the lead from the start of the race, his speed averaging over 82 mph (132 km/h).  However, he won the event outright in August with the ERA, climbing the Schauinsland Pass (7.4 miles) in 8 minutes and 5.33 seconds.  The same month he scored the fastest time with 3 minutes and 57.8 seconds at the Vue des Alpes hill-climb.

In April 1952 Wharton driving a Ford Consul beat Ian and Pat Appleyard’s Jaguar Mark VII into 2nd place in the Tulip Rally.  In 1952-1953 he regularly competed in national events at the wheel of a Frazer Nash Le Mans Replica, winning at Boreham and Snetterton and taking top-three places at Thruxton and Goodwood.  In 1953 he also scored second place in the British Empire Trophy at Douglas on the Isle of Man.

At his World Championship Grand Prix debut at the 1952 Swiss event, he started in thirteenth position at the wheel of his Frazer Nash fighting his way through the field to finish fourth.  That same year he retired in Belgium and Holland, but came ninth in Italy with a Cooper T20.  In 1953 he competed in a Cooper T23, managing to come seventh in Switzerland and eighth in the British event at Silverstone.  Wharton competed throughout 1952 and 1953 in either a Frazer Nash Le Mans Replica, or Frazer Nash Coupe with a best result of 2nd on 18th June in the British Empire Trophy.  In his first outing at Le Mans in 1953, driving with Bob Mitchell, for Frazer Nash, he finished 13th.

In March 1954 Ken Wharton started driving for Jaguar when together with Peter Whitehead they were testing the new Dunlop ‘Stabilia’ steel-belted, low-profile, radial tyres on the prototype light alloy car XP/11, at Reims.  These tyres outlasted the 1953 tyres by a factor of nearly three to one meaning they should only have to change tyres twice at Le Mans that year instead of six times.

For the 1954 Le Mans, Jaguar entered three of the new D-types with  Stirling Moss/Peter Walker in XKC 403 (registered OKV 2) and Tony Rolt/Duncan Hamilton in XKC 402 (registered OKV 1).  Ken Wharton, having replaced Ian Stewart following his decision to take up a business career, was partnered with Peter Whitehead in XKC 404 (registered OKV 3). Unfortunately  Wharton/Whitehead did not finish the race, retiring with fuel problems at 3:25 am after three long stops. 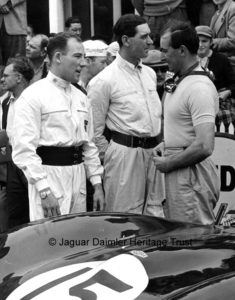 However, Jaguar went on to score a 1-2-3 win at the 12 hours at Reims only 3 weeks later with Whitehead/Wharton winning followed by Rolt/Hamilton with Laurent/Swaters finishing 3rd in their C-type.

On 29 August 1954, Wharton demonstrated a D-type at Shelsley Walsh scoring a time of 40.70 seconds, despite the car still having a Le Mans axle ratio.

For the September RAC Tourist Trophy road race in Dundrod, Jaguar built a 2,482 cc version of the XK engine to comply with the handicap system which penalised larger-engined cars.  Initially, the intention had been to enter four cars, the fourth being a C-type for Norman Dewis and Bob Berry, but only three cars were entered in the end.  Moss was paired with Walker in XKD 406 and Whitehead with Wharton in XKC 403, both in 2½-litre cars, while Rolt and Hamilton were paired in XKC 402, a 3½-litre car.  Whitehead/Wharton scored the best result for Jaguar,  finishing sixth overall, but second in class despite being delayed by a puncture.  The Ecurie Francorchamps C-type of Laurent/Swaters finished seventh. 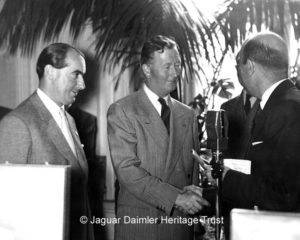 At the 1954 BRDC Annual Dinner held at the Dorchester in London, Wharton and Whitehead were awarded the ERA Trophy.

In 1955 Wharton was dropped by Jaguar because, as Lofty England recalled “he drove for Daimler without asking permission and the Old Man went hopping mad” .

[It wasn’t until 1960 that Sir William bought the Daimler Company from BSA bringing the two companies together.]

In 1955 Wharton suffered burns in two separate races, first when he crashed at the Silverstone International Trophy in a Vanwall and then again at Dundrod during the tragic multiple crash, in which Bill Smith died driving a Connaught.  Blinded by the smoke from the wreckage he crashed his own car and had to be dragged from his burning Frazer Nash.  In 1956 he drove a variety of cars either in his own name or for other teams including: Joakim Bonnier’s Alfa Romeo 6C 3000, Aston Martin DB3S, Maserati 330S, a Ferrari 750 Monza and a 290MM.

He only drove for Jaguar once in 1956 – at Le Mans.  Jaguar entered 3 D-types for Le Mans in July 1956, Hamilton having been sacked, Jack Fairman was paired with Wharton in XKD 602 (with PI).  Hawthorn was paired with Ivor Bueb in XKD 605 (with PI) and Paul Frère was paired with Desmond Titterington in XKD 603 (on Webers).  A spare car, XKD 606, was also taken.  Sadly Fairman was involved in a spin on lap 3 and was hit by De Portago’s Ferrari.  Although he managed to get the car to the pits, the damage was too severe to continue and Fairman/Wharton had to retire.  This race saw the first Le Mans entry for David Murray’s new Ecurie Ecosse team whose D-type, driven by Ninian Sanderson and Ron Flockhart, won the race.  While not a good race for Fairman/Wharton this was Jaguar’s fourth Le Mans win, cemented by the Equipe Belge D-type driven by Jacques Swaters and Freddy Rousselle, coming in fourth and Jaguar Cars’ own entry, driven by Mike Hawthorn and Ivor Bueb, finishing sixth.

Final Race and Funeral in Smethwick

At the end of 1956, Wharton came in third place at the Australian Tourist Trophy at Albert Park in Melbourne driving a Ferrari Monza.  But on 12 January 1957, at age 40, his Ferrari crashed on lap 17 of the New Zealand Grand Prix at the Ardmore Circuit in Auckland, New Zealand.  He was in the lead but clipped a straw bale causing his car to somersault.  He was thrown out of the car and killed on impact.  The race was won by New Zealand driver Bob Gibbons driving D-type XKD 534.  Wharton’s body was flown home and more than 1,100 people attended his funeral in Bearwood, Birmingham on 30th January. 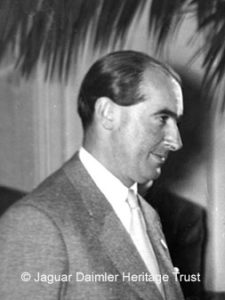 More than 1,100 people attended the funeral of Mr Ken Wharton, Smethwick businessman and international racing driver, at St Mary’s Church, Bearwood yesterday.  The normal capacity of the church was increased to more than 600 by installing special seats.  Almost as many people waited outside in drizzling rain.

The church doors were left open and a long line of mourners stretched down the pathway listening for the words of the service.

So great was the crowd that ushers had to ask people standing at the back of the church to withdraw to allow the funeral procession to enter, and to come back behind the family mourners.

The mourners came from many areas of Britain, and messages and wreaths were received from countries including Australia and New Zealand where Mr. Wharton was killed in a sports car race.  Across the coffin lay a broad black ribbon with the words, in gold lettering:

From fellow-drivers, members, Board and Executive of the New Zealand International Grand Prix.

With a simple red wreath it had been placed there during a memorial service at the Church of the Holy Sepulchre in Auckland, and had been flown home with the body.

Men and women famous in the world of motor sports joined representatives of car manufacturers and the people of Smethwick led by their Mayor, Coun. W. Gordon Mason, in mourning.  Wharton was known in his local town not only as an international personality, but as one who played his part in the progress of the community.

Motor racing clubs, social clubs and business clubs were represented.  From a Worcestershire village came a small group to mourn the man who was the vice-president of their cricket club.

At the interment at Quinton the family mourners were joined by another large crowd.  There, as the coffin was lowered, Mr. Raymond Mays, former hill climb champion, and the man who introduced Mr Wharton to the B.R.M. racing team, lowered a chequered flag – the signal of the finish of a race.