Racing Driver and Architect of the Montlhéry Record Runs 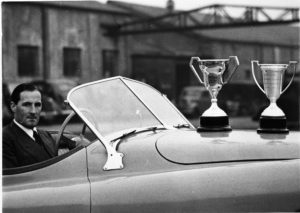 In Jaguar circles, Leslie Johnson is generally known as one of the four drivers, and the one who came up with the idea, of the XK120 FHC – LWK 707 – that was driven round the track at Montlhéry at over 100 mph, 24 hours a day for a whole week in August 1952.  More importantly he was the first driver to race the new Jaguar XK120, winning races both at home and in the US and drove for Jaguar on many other occasions up to 1953.

This article only deals with his time and efforts with Jaguar, the rest of his career is well documented elsewhere.

Leslie Johnson was born on 22 March 1912 in Walthamstow, North East London, at that time one of London’s poorest districts, and he spent his early years there.  His father, a cabinet maker, died soon after starting his own business.  Johnson, left with a mother and younger brother to support even though he was still in his teens, took charge of the firm.  The employees responded to his management style with a loyalty and dedication which, allied to Johnson’s astute business brain, helped create the successful furniture manufacturing business that funded his entry into motor sport.

His competition career started in the 1930s when he rallied a BMW 328 but this stopped with the outbreak of war.

Among his close friends was Jaguar founder William Lyons (to whom he lent his BMW 328 for detailed mechanical investigation during the post-war planning and design of the XK120).

When competition resumed after World War II, he progressed from rallies to hill climbs, sports car racing and single-seaters.  Although a prodigiously gifted driver he never made a full commitment to racing, business interests remained his primary focus. 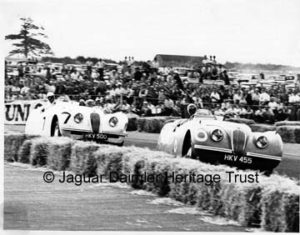 Highlights of his Jaguar Driving Career

Johnson’s involvement in motor sport began and ended with rallying, and he was a member of the Rootes factory team but also rallied an XK120 before progressing to sports car racing.  Johnson’s early races were with his BMW 328 and a Talbot-Lago T150C before going on to Aston Martins and Jaguars.  He achieved Aston Martin’s first postwar international victory in 1948, and then the first successes for the XK120 in both England and America.

In 1950 Johnson, partnered with Bert Hadley, entered his XK120 for the Le Mans 24 hour race, having raced there in 1949 driving an Aston Martin.  This was one of three private entries that year of the new Jaguar XK120.  Although Johnson / Hadley retired with clutch problems 23 hours into the race, after completing 220 laps, the other two XK120s finished 12th and 15th.  Had their clutch not failed they were on target for finishing 13th behind Peter Clark and Nick Haines in their XK120.  This was a good result for Jaguar, proving that the XK engine and running gear was inherently reliable, even if the car itself wasn’t either designed to race, nor quick enough to win.

Following his efforts in the 1950 Le Mans 24 hour race with his XK120, Jaguar developed the XK120C (C-Type) to race at Le Mans in 1951 – winning first time out.  For 1952 Jaguar modified the cars to try and gain some extra speed but all three C-Types failed with overheating problems.

Leslie Johnson decided another record attempt at Montlhéry would be good publicity and suggested they go ‘flat out for the week’.  He persuaded William Heynes to release a car from the Experimental Department – a bronze coloured XK120 FHC.  This was the second right-hand drive coupé made, LWK 707 and was fitted with long range fuel tanks to minimise the number of stops, an additional windscreen wiper to improve visibility when high on the banking and a two way radio. 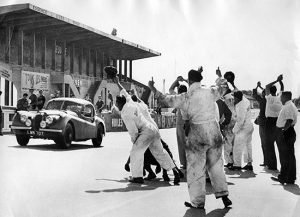 “…in mid-summer Leslie Johnson had another of his ideas.  Having averaged 100 mph for 24 hours at Montlhéry he now talked Jaguar into attempting 100 mph for a week!…We again drove in three-hour spells.  The speedbowl lap was under a minute at 120mph, so it was quite a strain.  After each straight we hit the banking high up near the lip, then plunged off, twice every fifty seconds, night and day.  In each spell we would cover about 2,000 laps.  It was impossible to keep one’s mind occupied on a job like that.  We had a two-way radio which helped keep boredom at bay.  We talked all the time, called each other names, even told stories.  One dare not let the mind wander, because we were running within four feet of the banking lip at around 120 mph.  One had to concentrate on something. I worked out how many million revs the engine made in a day, how many times the wheels turned, things like that. 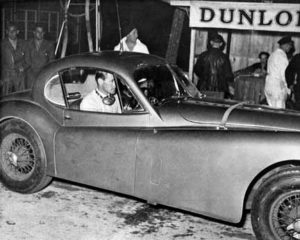 The weather did not help; hot by day, cold at night.  Night driving was a strain too, because we couldn’t afford the drain on the battery of extra lights.  The headlights had to be set very high to let us see the top of the banking when we were on it, and this meant that on the short straights we could see nothing at all because the beams were playing in the air.

We hit several hares, rabbits and birds, and Leslie swore at one point that he’d seen a huge ten-foot tall figure in a long cloak, wearing a tall pointed hat, striding toward him along the verge.  Next time round the figure had gone…it worried the life out of him for the rest of his stint.  In fact I (Stirling Moss) had donned a Shell fuel funnel, pulled a tarpaulin around me and sat on Jack Fairman‘s shoulders as he strode along the verge.  After Leslie had whizzed by we ran away and hid…All very childish, but good fun in the circumstances.  Leslie then had an extraordinary idea to get his own back during one of my stints.  I came whistling off the banking to find him sitting with Jack Fairman in the middle of the track, playing cards!

Then he took the pit signal board and put it out on the track, so that my natural line past the pits took me between it and the timekeeper’s hut.  He was lounging beside the hut so I waved to him as I shot though the gap.  Next time round the board had been moved closer to the hut.  The gap was narrower, but I couldn’t leave the fast line so I shot through it again.  Next time round, he’d moved the board closer still.  Each lap he narrowed the gap which made me concentrate harder to pass through it.  Eventually he gave in, and the board went back to its proper position, hung on the tent.  At least it passed the time…” 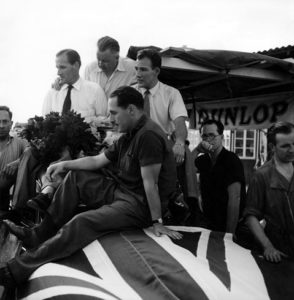 Montlhéry’s concrete surface was rough, and the Jaguar broke a spring when it was already well into the run.  No spare was carried on board.  Regulations stipulated that an outside replacement would make the car ineligible for any further records beyond those already achieved before the repair.

Johnson drove nine hours to save the other drivers from added risk while the speed had to be maintained on the broken spring.

When finally he stopped to have it replaced, the car had taken the following records:

After the repair the car went on to complete the full seven days and nights, covering a total of 16,851.73 miles at an average speed of 100.31 mph.

LWK 707 is now owned by the Jaguar Daimler Heritage Trust and generally on display in either the Collection Centre, or the main Museum building at the British Motor Museum at Gaydon.

Alongside his racing, his business ventures included the acquisition of British racing car manufacturer English Racing Automobiles (ERA) in 1947.  He raced ERAs from 1947 to 1950 and sold the company in 1952.  He also initiated and negotiated Stirling Moss‘s first commercial sponsorship deal, with Shell.

Leslie Johnson died on 8 June 1959, aged 47, at Foxcote House, the family’s home in the village of Foxcote, Gloucestershire, England.