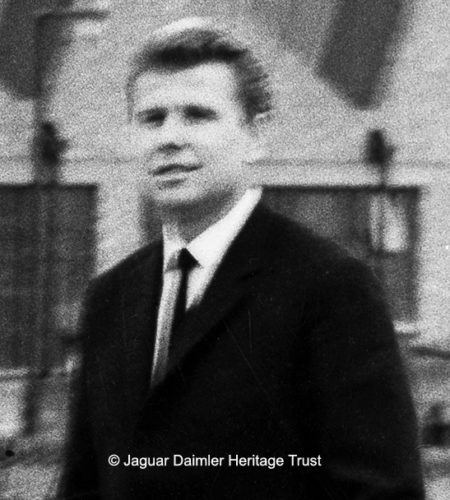 Peter Lindner, born on 16 March 1930 in Düsseldorf, was a German importer and distributor for both Aston Martin and Jaguar, as well as a successful racing driver.

In 1957 Lindner met with Sir William Lyons who was clearly impressed and he was appointed official Jaguar importer for the Bundesrepublik Deutschland.  Most of the early sales went to British or American servicemen stationed in Germany, but Lindner also managed to convince some German customers to switch allegiance from Mercedes and other German marques.

An enthusiastic driver, he would think nothing of rushing to an airport to close a sale or meeting clients at weekends and he campaigned his British racing green 3.4 Mark I regularly on the circuits.

Highlights of his Jaguar Driving Career 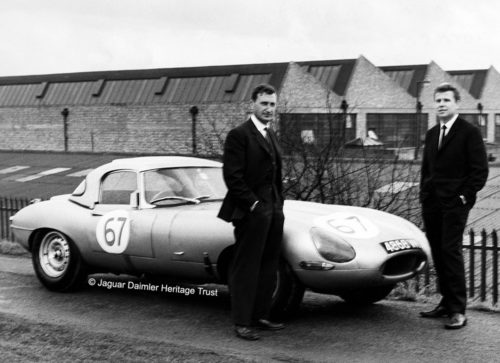 On 3 May 1963  Jaguar Cars registered Lightweight E-Type chassis number S850662 as 4868 WK and it was delivered to Lindner a fortnight later.  This was the fifth of the twelve Lightweight E-Types produced by Jaguar in 1963, a roadster which was normally raced with a hardtop fitted.

His first outing in the Lightweight was not a success.  At the May 1963 Nürburgring 1,000 km race, he managed to take the lead on the first lap after making a brilliant start from eighth position.  However he was overtaken on the second lap  by a Ferrari and he had to retire due to a lack of oil pressure after 25 laps.

One month later at the same circuit, with Nöcker co-driving the Mark II, they won the Six-Hour Touring Car event, beating the Mercedes 300SEs of the Daimler-Benz works team into 2nd and 3rd places. 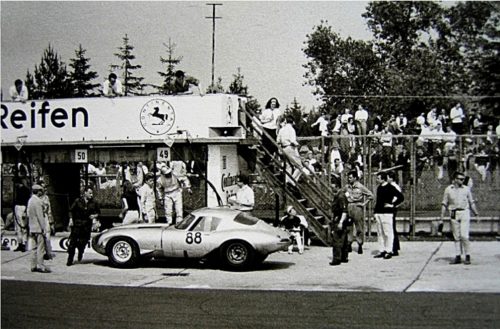 Although they drove together as a team, Nöcker was generally regarded as being the better, smoother driver.  He was always quicker that Lindner round the Nürburgring and on 30th June 1963 he drove Lindner’s Lightweight E-Type at the Avus circuit in Berlin,  averaging a speed of 132 mph, setting a fastest lap of 137 mph and beating a Ferrari GTO.

In preparation for the 1964 season, the Lightweight roadster returned to the factory to receive some bodywork improvements, emerging with a rear copied from that of the “Low Drag Coupé”, the last car to be designed by Malcolm Sayer, transforming the car into a sublime coupé.

Lindner and Nöcker entered the Lightweight for the 1964 Le Mans race but suffered overheating problems.  By lap 23 the car was ‘steaming’ with the temperature gauge at 100˚C and around 8:00 pm he pulled into the pits and his cooling system was re-filled when it was found to be empty.  The problem persisted and he pitted again at 10:30 pm when in just 3 hours his two mechanics replaced the cylinder head and gasket.  The problem persisted and at 3:22 am Nöcker pitted for more water and a dose of Barseal, another two gallons were added at 5:25 and the car was eventually retired at 7:30 am after 149 laps. 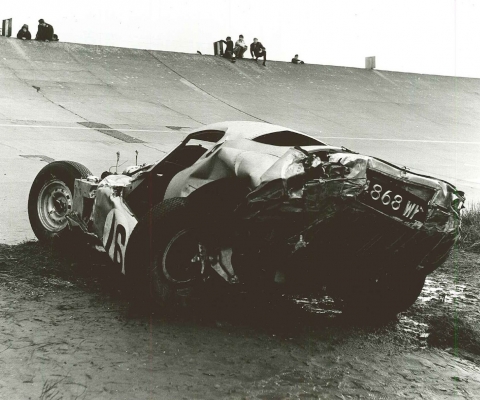 On 11 October 1964, during the 1,000 km race on the Montlhéry circuit near Paris, Lindner sadly passed away (aged 34) after colliding with Franco Patria’s Abarth-Simca 1300.

Patria was on the way back out of the pit lane with new tyres and a full tank, waiting for the marshalls to allow him back on track.  Peter Lindner came out of the steep curve in front of the start and finish on the wet track and appearing to aquaplane, lost control of the Jaguar on the smooth track.  He clipped the bales of straw, and the car was thrown about ten metres in the air, spinning in the process and ejecting Lindner who was not strapped in.  The Jaguar hit Patria’s Abarth and pushed him against a wall.  Franco Patria and the three marshalls; René Dumoulin, Roger Millot and Jean Pairards were killed immediately.

Peter Lindner was initially conscious, and taken to hospital where he died.

Lindner’s Lightweight was impounded by the French authorities and was locked away in storage for many years.

It was thought by many to be unrepairable, until it was restored in the late 2000s to become the well-known Lindner-Nöcker Lightweight.

In 1974 Patrick Lansard rescued 4868 WK from the French authorities and it went through a number of owners before acquired by Guy Black of Lynx Engineering in 1979.  Lynx re-constructed it using parts from the original car and a new ex-factory monocoque, with the original monocoque and bonnet put into storage.  The re-constructed car was sold to Howard Cohen from California, USA and was sold on again in 1982. In 1984 it was bought by Peter Klaus of Aschaffenburg, Germany and became part of his Rosso Bianco Collection. 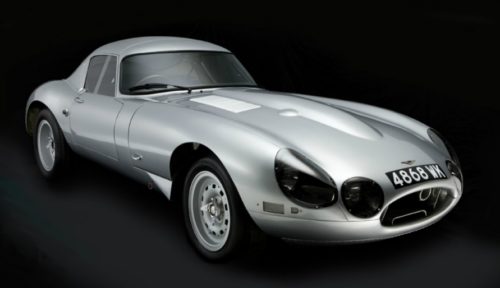 When this Collection was split up in 2006 Peter Neumark, owner of Classic Motor Cars (CMC) of Bridgnorth, UK, bought the re-constructed car and the damaged monocoque and bonnet, with the goal of restoring 4848 WK to its original glory.  CMC had previously restored the original 1961 Geneva press E-Type, 9600 HP.

They un-riveted, flattened, repaired and reformed every single panel from the damaged body managing to save over 90% of the original metalwork.  Over 7,000 skilled man hours went into the restoration, with more than 5,000 hours spent on the body alone.

“We tested the metal to see if it would weld and once we were sure it would, we took the decision to completely restore the original body.  It was a bit loopy really but it has all worked out and it was very definitely a labour of love.  In fact I had to install more than £30,000 worth of welding equipment just for this one job” said Neumark. 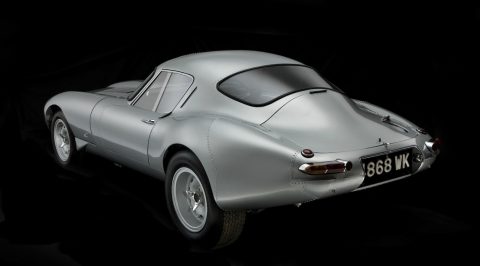 Peter Wilson who worked in the Competition Department in 1964, helped with the restoration, as well as Lindner’s own family who provided old photographs and cine footage of the car.

The Lindner-Nöcker was unveiled in Bridgnorth in 2010 in the presence of more than 300 people, including Lansard, Lindner’s nephew Thomas Fritz and Jaguar test driver Norman Dewis, “The car is so beautifully restored, I am sure it is a lot nicer than when it left the factory.  If Sir William Lyons had been standing beside me, he would say ‘Dewis, why’s it taken so long!’  This is just another landmark in what is going to be a wonderful year for the E-Type.”

“Many people said that it could not be done but we have proved them wrong. ironically, because of the work we have done, this car may be fresh out of restoration, but it is probably the most original Lightweight E-Type that there is!”   Neumark. 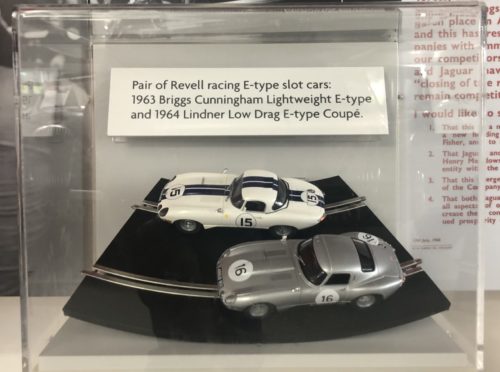 Although the Lindner-Nöcker didn’t race again, it took part in many social events during the E-Type’s 50th Anniversary year (2011), including Goodwood and Villa D’Este.

At the International Historic Motoring Awards in 2011, the car won the Restoration of the Year Award.

In period the car was also produced as a Revell (slot-car) model and one of these, together with a model of Briggs Cunningham’s 1963 Lightweight E-Type is on permanent display in the Jaguar Collection at the British Motor Museum at Gaydon.

© Text and Images – Jaguar Daimler Heritage Trust  (except where stated)