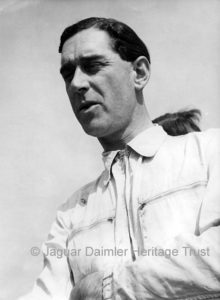 Though he died in 1984 at the age of 72, Walker is still remembered by his peers and loved ones as a charming and a skillful driver.  “He was fast in the car and easy to get along with – a regular guy – which is why I always preferred him as a co-driver” Stirling Moss.

Peter Douglas Conyers Walker was born on 7 October 1912, in Huby, Yorkshire, England.  His racing career started in 1935, after linking up with Peter Whitehead and racing his ERA.

His post-war performances at hillclimbs, including Fastest Time of the Day (FTD) at the 1948 International Prescott Hillclimb meeting, brought him to the attention of Lofty England, the manager of Jaguar’s sports car racing team.  Along with Prince Bira and Leslie Johnson, he was rewarded with a drive in an XK120 in this newly-launched car’s first race in the One Hour Production Car Race at Silverstone in August 1949.  The three cars were painted red, white and blue and although Bira led for a while, he spun off, leaving Johnson to win and Walker finishing second on that occasion but he won at the same event a year later in an alloy-bodied works-prepared XK120, registered JWK 977.

On 16 May 1951, he and Stirling Moss carried out initial trials with the new XK120C, or C-type as it became known, driving it around the MIRA test track at Lindley.  Walker completed 20 laps and Moss just 13, with their best lap times being 1 min and 55 sec and 55.6 sec respectively. 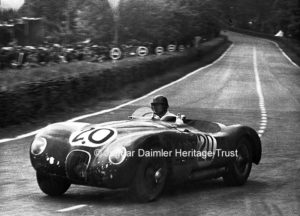 When Jaguar went to Le Mans in 1951 with a C-Type, after the success of XK120, Walker was approached and paired with Peter Whitehead and would go on to win the race on their first attempt, just six weeks after completion.  It should be noted, during the practice session, Walker completed a best lap at 4 min and 50 sec in the dark, at an average speed of 104 mph – no other driver, including Stirling Moss, could get below 5 min.

The 1951 Le Mans 24 Hours could easily have ended in disaster for Jaguar.  After just 50 laps, the Biondetti/Johnson car retired with falling oil pressure, dry bearings and a broken con-rod at Arnage, and Moss/Fairman’s Jaguar retired for the same reason.  It was discovered these failures were due to engine vibrations causing a copper delivery pipe in the sump to crack.  This meant Walker and Peter Whitehead had to adjust their driving style to ensure that the engine in their car was maintained in vibration-free rev bands, which they managed to achieve with ease, scoring Jaguar its first of seven victories at the Sarthe circuit.  They completed 267 laps covering 2,244 miles and finsished 9 laps and 78 miles ahead of the second place Talbot-Lago driven by Guy Mairesse and Pierre Meyrat.

On the Monday following the race, after a celebration lunch given by William Lyons at the Hotel de Paris in Le Mans, Peter and his first wife Patsy Walker drove the winning C-type directly to Henly’s showrooms in Piccadilly.

During the 1952 season, Walker’s performance in the C-type (chassis number XKC001) at Shelsley Walsh brightened up the lives of a good few motoring enthusiasts who were still recovering from the aftermath of the War, especially since for many, this was the first time they had seen a Jaguar C-type.  He broke the sports car record with a remarkable time of 41.14 sec and later in the year, he took the record at Prescott with another remarkable time of 47.53 sec.

During Walker’s first event of 1953 for Jaguar, on May 9, Moss experienced a terrible accident in practice for the Daily Express meeting at Silverstone, turning the car over.  However, that didn’t stop him from starting the race after the C-type had been hastily re-bodied.  As all three Jaguars were still fitted with drum brakes and the engines on 2 in SU carburettors were giving a comparatively feeble 215 bhp, the opposition from Ferrari and Aston Martin filled the first four places at the end of the race.  Walker was fifth, Graham Whitehead was sixth in his half-brother Peter’s similar car and Stirling Moss was seventh. 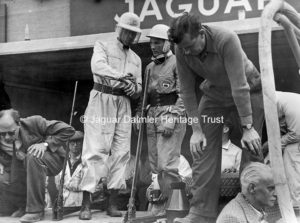 In the 1953 Le Mans race Walker, paired with Stirling Moss, led in the early stages until engine problems occurred.  This was only solved after a second stop, and they finished four laps down on their winning teammates, Tony Rolt and Duncan Hamilton.  This would be the closest Walker would ever get to a second victory at Le Mans.

Though very skilled, mechanical problems would continue to hit Walker who, together with Moss, led comfortably for the first eight hours of the Goodwood Nine-Hour race, until the car retired.  At the RAC Tourist Trophy at Dundrod, Walker broke the lap record with a time of 5 min 1 sec at an average speed of 88.70 mph, but again hit mechanical problems, with Moss managing to finish in third place.

In 1954, Walker remained with Jaguar, but the season wasn’t successful despite teaming with Moss for Le Mans in a Jaguar D-Type (OKV 2), where they retired in the 12th hour with brake problems.  At the end of the season, Walker joined Aston Martin which was bad timing as Jaguar’s Le Mans victories were set to continue.

Retirement and Life After Racing

Walker made a mistake in the 16th hour of Le Mans in 1956, crashing his Aston Martin DB3S – the car skidded on the wet track near the Dunlop Bridge and hit the wall, ultimately sliding upside down on the track.  Walker recovered from the accident, but was never the same again hence retiring after the career-ending accident, “Peter remained the jovial charmer that he’d always been, but after his accident he used to occasionally mutter to himself and say strange things.  But in all other respects, his brain was as sharp as ever” – Percy Hall, a barman at the New Inn, Pembridge, Herefordshire, where Walker regularly frequented.

After he retired from motor racing, Walker took up rabbit and chinchilla farming with Lady Ripley for a while and lost interest in motorsport.

Towards the end of this life, Walker took comfort in alcohol, but despite this, he was still praised, “Peter was a charming bloke and I believe that had he been able to go motor racing full-time instead of four or five times a year, he could have been very good indeed.  Quite often, on the fast circuits he was as quick, if not quicker than Moss” – Lofty England.